Serious Political Resistance is Growing in America Against Tyranny! 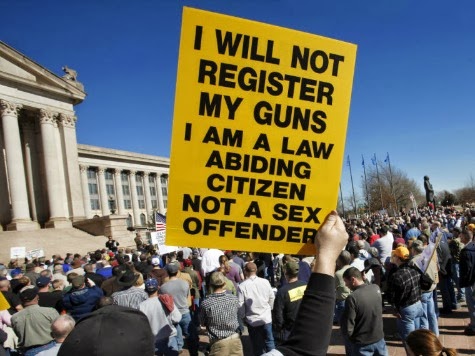 Hartford, CT—Hundreds of thousands of gun owners risk felony arrest and conviction as they purposely ignore and resist new government anti-gun rights tyranny here.
The politicians here have banned what they describe as “Assault Weapons” and certain ammunition magazines.  They created a registration scheme to allow gun owners to “keep” their weapons provided they register them.
They did that same thing in California in the 1990s.  Thousands of gun owners there simply never registered there either.
Since people who are prohibited from owning firearms cannot be forced to register guns because of self-incrimination protections the law-abiding are the only ones affected by these laws.
Gun registration is for one single purpose and that is as a major incremental step to firearm confiscation.  Gun registration has never been beneficial to law enforcement as a tool to curb crime.
Criminals simply never leave guns behind at crime scenes unless they are killed or incapacitated.  At that juncture what’s the value of registration?
The gun owners of Connecticut are well aware of the legislative and tyrannical scam officials are running and have simply refused to cooperate.
Now officials are in a difficult position since they really have no way of raiding citizen’s homes without serious bloodshed.  They have nowhere near the manpower to force this issue.
Imagine if you will Randy Weaver or Waco Branch Davidian style raids on local family homes dominating TV news every night?  Can you imagine hundreds of bloody body bags overwhelming every coroner’s office?
Connecticut is going to be forced to back off their plans for further tyranny.  They really need to rethink and repeal their new law.
The USSR made so many laws restricting freedom that few people respected any laws whatsoever.   That’s what’s happening in the USA.  We’ve not learned from history and are making the exact same mistakes.
What the gun grabbers must learn is that there are millions of well-armed and trained military veterans that respect our Bill of Rights and Constitution better than our politicians.
Most of the rank and file cops in America don’t support the myriad of unconstitutional gun laws either.  They will balk at conducting raids against their fellow Americans in order to satisfy our Fascist politician’s insatiable thirst for total control.
Many in law enforcement and our military will quickly feel that their oaths of office require that they turn their own guns against the officials that dare order armed raids on America’s gun owners.
In the end the gun confiscation wet dreams of our politicians will be their worst nightmares.
Posted by Paul Huebl Crimefile News at 2/21/2014 08:24:00 AM

In order for them to carry out their final rape of America, they need to confiscate the weapons. If this ever does happen, having a secondary passport will be as equal to or more in value than gold.

Actually all these Law-Abiding Citizens Firearms are already registered, if bought legally. That's why the forms are filled out at time of purchase of a firearm. So why is anything more necessary? Just another Totalitarian scheme to disarm and control by dictatorship and force, aka; to end freedom completely.

You sir are correct. Every time you buy a gun from a gun store or ship one in from out of state which requires an ffl, there is a record of that gun sale. So it already is registered. The only time you don't use an ffl is for in state sales which represents about one percent of all gun sales annually.

Paul, I am convinced that all this registration nonsense is for the eventual confiscation of our guns. But I don't believe they will come for our guns, house to house with a SWAT Team. I think they realize that that would be a blood bath for both the confiscators and the gun owners. I think that what they will do is suspend your drivers license, in Illinois, revoke your FOID card. Perhaps put a lien on your home, garnish your paycheck, things like that. Perhaps an additional income tax if you refuse to give up the guns they know you have. I must, as a Chicago Police Officer, register my guns or I lose my job. But what I did was I registered my service weapon. That's the one they know about. The twenty two others, nope. lol. I encourage everyone else to do the same. DO NOT REGISTER YOUR GUNS!

During the debacle in New Orleans during Katrina the police DID go door to door and confiscate guns. Don't think it cannot happen again.

You are correct about Katrina but that occured during a disaster. I could be wrong but
I dont think thry will try it during normal times. I also don't think it will be local law enforcement, l think it will ge the feds.

A disaster is the worst time for the Gestapo tactics of seizing private arms. That's when citizens are most vulnerable. Is there a "good" time for the seizure of private arms. As an LEO for over 30 years I would refuse any order to do what was done in New Orleans.

Many golden boy traffic nazi swat teams will end up like this or worse:

Remember,as a LEO you took an oath to uphold the Constitution..

Back in the early 1990s the outlook for the nation in general and gun owners in particular seemed rather grim to many people. A few years earlier in 1986, Congress had banned civilians from owning newly manufactured machine guns. There was ever more strident talk of banning semi-automatic weapons or so called assault weapons. Many of us regarded a semi-automatic rifle as the foundation of a home defense battery. Many of us believed that more laws banning ever more types of guns were imminent. About that time I acquired a Ruger Ranch Rifle through a private sale. I decided to stash it away in a safe place just in case my worst fear was to materialize, another gun ban.

First order of business was to decide how I would prepare the gun for long-term storage and where I would store it. I decided that for maximum security I needed to bury it. This would keep it safe from all but the most determined government goons. I set about finding an appropriate location. I live in a fairly remote, wooded rural area in the northeast. One day as I was walking in the woods I noticed a hemlock tree had blown down and been uprooted by a recent windstorm. There was a small crater about eight feet across and three feet deep where the root ball had been torn out of the ground. It occurred to me that this would be a good spot for my rifle.

Since I now had the location, I began preparing the rifle for storage. I bought a piece of 6-inch diameter schedule 40 PVC pipe, end caps, and PVC solvent from a hardware store in another town where I had never done business before. Being in a rural area where everyone knows everyone I didn't want to arouse any suspicions about what I was up to. I then disassembled the rifle and completely coated every metal part with a rust preventative oil intended for storing unused machinery in damp locations. This oil dries to form a waxy coating. I was extra careful that the bore was completely coated. I wanted to vacuum-pack the rifle as extra insurance against rust. As it turned out my employer had just taken delivery of a mainframe computer that happened to be wrapped in a large
the tree upright using a chain attached to my truck. By this time the tree had died and most of the needles had fallen off. Once returned to vertical it was pretty stable and a little dirt and debris shoveled around the edges did the trick. In any healthy, well-managed forest there are always a few standing dead trees, so this one would not arouse the curiosity of anyone who hunted or hiked there.

I never told anyone what I had done and I didn't write down the location anywhere. About five or six years later I had a timber harvest. I had my consulting forester mark the tree as a wildlife tree so it wouldn't be disturbed by the loggers. It was, after all, popular with the Pileated Woodpeckers. It has been 15 years since I buried the rifle and I have recently had another timber harvest. The tree was quite rotted by this time and it didn't survive the harvest. I had been keeping an eye on it, so when it finally fell I marked a nearby tree so I could find it again after the loggers left. Even careful logging causes quite an upheaval in the forest and it can be difficult to locate a specific spot after all the landmarks have been changed. After the logging crew had left it took me several days with a shovel and a rake to locate the rifle. In hindsight, I should have had some additional way of locating it. Since the top of the pipe was about three feet below ground level, my old metal detector wasn't much help. I decided that it would be interesting to retrieve the rifle and see how well my storage plan had worked.

I managed to locate the very rotted stump beneath the logging debris and started digging. Once I located the top of the pipe I excavated around it about a foot on all sides and to a depth of about a foot below the top of the pipe. I attached a noose of polypropylene rope and used the winch on my truck and a convenient log to slowly pull the pipe out of the ground. After all these years the soil was still very loose around the pipe and it was relatively easy to pull it out. I could have accomplished it without the winch had it been necessary. After removing the pipe, I filled the hole with logging debris and covered it up with some loose hemlock boughs to prevent someone from falling into it.

Back at the house I hosed off the mud and prepared to saw the pipe open. Using a handsaw, I very carefully cut completely around one of the caps. I didn't want to damage the contents by being too enthusiastic.

With the cap removed it was immediately obvious that no moisture had gotten into the pipe. I carefully slid the contents out on to a table for examination. After unwrapping the duct tape and removing the outer bag, it was obvious that all was OK. All of the individual packages were unwrapped to reveal the contents were as good as the day they were packaged.

So if you think it is necessary, you can store a rifle safely for long periods in harsh environments. A little attention to detail, some scrounged materials, and a few dollars in supplies are all it takes.