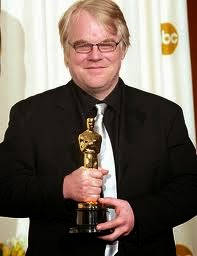 New York, NY—Becoming a successful actor is incredibly difficult for most even if they have talent.
Just getting a decent manager and or agent is a major task.  An actor without an agent is unemployed.
Aside from my investigative and media work I'm an actor.  I did my best work in community theater.
I’ve had a SAG-AFTRA membership card since 1997.  I did a few forgettableTV spots and  films before a serious hearing loss problem sidelined me.  I have great hearing aids now but my age is not helping me to get motivated again.
46 year-old Phillip Seymour Hoffman made to the RED Oscar Carpet winning as Best Actor for his role in Capote.  His career was on fire!
Hoffman was also successful producer and director.  He was currently filming for the Hunger Games franchise.
Hoffman confessed addiction problems and did a stint in rehab.  His premature death seems to indicate this was an accidental overdose of drugs.   But that is only a guess by NYC police officials that revealed he was found with a needle in his arm.  It will take weeks for toxicologists to tell us what poisons he had in his blood.
Hoffman appeared to be at least 15 years older than he should.  Perhaps drugs played a role in that too.
It’s heartbreaking to see a talented and successful actor destroy a great life.  I know so many terrific actors today that fight so hard for small paying roles.  Many of them will be shaking their heads in disbelief.
Hoffman like most of us had demons and I’m sure depression played a part.  He sought help but apparently it was too little too late.
This kind of thing should make all of us understand that we are our brother’s keeper.  We must help those around us understand they are needed.
Hoffman’s manager and agent must be devastated by this loss.  Hoffman left behind a partner Mimi and three children.
Hoffman had many more roles to play, parties to attend and friends to meet.  That’s all over now and may he rest in peace.

Paul for al old tough policeman and private eye your humanity surprises me. You appreciate art, theater and hate the death penalty. You love animals too. I'd love to meet you but I live in the Netherlands. I love your blog and the causes you champion. I hope you like Dutch women other than our leading actress Carice van Houten you've written about. She is very pretty indeed. I hope your single!

I'm single and enjoy European women. It's a little far to Holland but I visit there whenever I can. Fell free to send me an email.