A Life Saved Only To be Lost a Year Later… 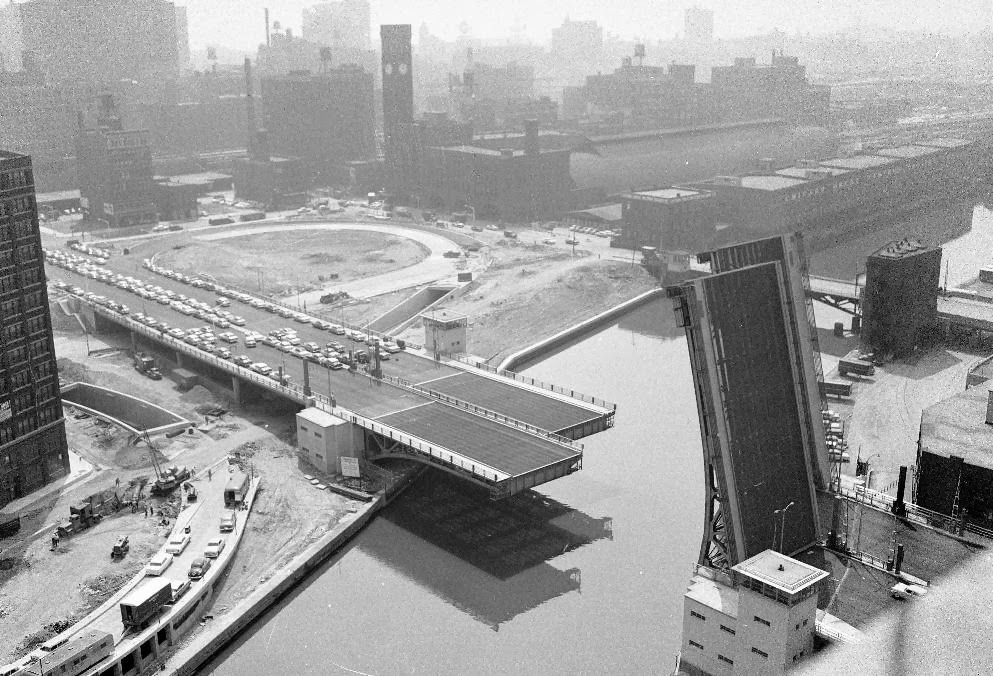 Chicago, IL—The Internet is adding information at a rapid pace.  I often wondered what happened to a suicidal woman I helped pull from the Chicago River in July of 1976.  Today I found the tragic answer.
It was just after eating a rather large breakfast I was in my personal car Westbound on the Congress Street Expressway Bridge by the huge post office building.
Suddenly in the stop and go rush hour traffic I saw a women bleeding from both wrists climbing on the South side railing of the bridge and suddenly she jumped into the filthy water below.
I pulled to the right and stopped my car in an effort to deal with the obvious emergency.  I crossed all the lanes of traffic on foot.  I discovered a man had broken the glass covering a life preserver and managed to hopelessly tangle its attached rope to the bridge.
I could see the woman floundering below and ran down to the embankment to aid her.  As I was running I saw a man later identified as David M. McCauley dive into the water after the woman.
I was no champion swimmer and dreaded the thought of the nasty sewer like water and fighting with this suicidal woman in efforts to pull her out.
Whatever reluctance I may have had disappeared when it was obvious that Mr. McCauley may be killed trying to save this woman by himself.
I quickly striped off my gun belt and uniform.  Two women had come to the riverbank and were watching.  I told one of them to run and call the police and fire departments (this was before the 911 system was established).  I asked the other woman to please watch out for my gun and clothing.
I swam out to the pair in time to see that the woman had Mr. McCauley’s head under water.  As I tried to help she managed to pull me under too.  Finally she gave in and we were able to tow her to shore.
There was no way out of the river because at the time it had sheer high walls on both sides.   We soon could hear sirens and saw firemen lowering a ladder into the water.  A fire Lt. jumped in and helped us push the woman up the ladder. Thankfully a fire station was very close to us.
McCauley and I got out of the water and dried off with white fire department sheets.  I put my uniform on and gave my car keys to cops that had responded.
A sergeant from the First District (I was assigned to 012 just West) told me to get into his car because he was taking me to the hospital. We drove behind the ambulance transporting the woman. I soon became nauseous and was ready to vomit.  That’s when the good sergeant flipped on the lights and siren.
Moments later we were at Rush St. Luke's Hospital's  emergency room doors where I got out and upchucked in the driveway (that was much better than in the patrol car!)
Other officers made a hospitalization case report and I was given a prophylactic injection because of my exposure to that nasty river water.
The next day I saw my picture on the front page of the Chicago Tribune and the story accompanying it.  Somehow it did not feel good.  This came at the expense of the high profile exposure of a woman’s emotional troubles.  They had published this troubled woman’s name along with the distant photos they had her in the actual rescue.
Mr. McCauley was a district sales manager from Allstate Insurance.  McCauley was appropriately put in for a Carnage Hero Foundation Award and received it.  I received a Department Commendation and a second special award from the late Mayor Richard J. Daley.
As to what happened to the suicidal woman that’s the rest of this story.  Billie Gail Hubacher, 38 was placed in the psychiatric unit of the hospital after they tended to her self-inflicted wrist wounds.  Soon they released her for future out patient treatment.
I knew nothing else until this morning when I discovered she died just short of a year later at 39 years of age on May 1, 1977.  I can only assume that Hubacher finally succeeded in taking her own life.
Depression can be so deadly.  I don’t know what demons Hubacher was fighting in her last year on earth.  Suicide at such a young age was certainly no answer to her problems.
Hubacher was obviously an emotional train wreck.  She may have been pretty and well educated but I could never tell from that fateful encounter.  Did that really matter in the end?
I can’t imagine what I could have done to help.  However in retrospect nearly four decades later I could have simply visited her at the hospital just to let her know I cared that she lived.
I should have taken the time to tell her the truth that there was much better life and adventures still ahead for her.
I am indeed my brother’s (in this case my sister’s) keeper.  Here I know I failed in my duty as a human being.

Isn't it true that our biggest regrets in life are the things we have NOT done, as opposed to what we HAVE done?

Paul, I know it can be haunting, and you're a few years ahead of me, so it's kinda silly for me to advise... but this experience, and your rather oversized sense of duty, are part of what made you the good guy I perceive you to be now.

Anyway, sorry for your sense of loss.

Paul I remember that rescue because I was assigned to 001 at the time. You did a great job and the department was taking a beating in the media for scandals at the time.

I'm long retired an living in Italy today. I have a wife, children and grandchildren. Be proud of your service I'm proud of mine.

Had you not done what you did both may have drowned. Don't beat yourself for the woman's suicide. She lived another year because of you.

you absolutely should not beat yourself up Paul. You did everything you could to rescue her at the cost of getting sick yourself. No way does that make you responsible for that woman for the rest of her life.