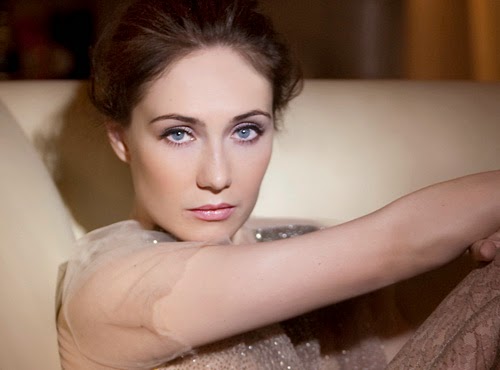 Amsterdam, NL—I read a rude and troubling story in Amsterdam's Metro News this morning.  It said that that the Netherlands’s most accomplished and award winning actress Carice van Houten is past her prime and probably won’t be able to make waves in Hollywood.
First let me say that van Houten looks young, wonderful and works out religiously to stay fit.  This beautiful and talented Dutch actress still has exactly what it takes to take Hollywood by storm.
Currently van Houten plays the role of Melisandre in HBO’s Game of Thrones.
She has starred in a terrific Paul Verhoeven film, Black Book as a Dutch Resistance spy and hero.  Along the way she made several other films.
If there is something unfortunate about van Houten’s Game of Thrones role is that hoods, capes and a long red wig cover her.  That made van Houten nearly unrecognizable to American journalists when she walked the Red Carpet for the show’s third season premier in Hollywood last year.
Not only can van Houten act but also she can sing as she did in Black Book.  Musical director Anne Dutton created a period musical score for that film that van Houten really brought it to life.
Today's Metro’s article cites current and somewhat accurate research showing that acting roles seem to dwindle for women past their 34th year.  Then the Metro jerk rudely reminds us that van Houten is 37!
There are a few exceptions to these unwritten film career rules like actresses Glen Close and Meryl Streep.
There is an undeniable sexiness and charm maintained by van Houten that should keep her fresh for many more years.  I hope  her manager Janey van Ierland (Nummer19) and agent, Tracy Brennan, (CAA) will aggressively continue to market her to film producers and casting directors rather than to give in to a false prophecy.
When it comes to leading ladies van Houten performs right at the very top.  Casting directors and producers should keep their eyes open to make their films really sparkle with van Houten's amazing talents.  Van Houten can really make a good film great.
You will be seeing van Houten in upcoming American films such as Incarnate from Blumehouse Productions.
Two other known projects are in development, Broken, from Paradoxal and a biopic film; Garbo where the lookalike van Houten will play that legendary actress.
I hope to see van Houten take the lead role in a script I have written about a young woman who was wrongfully convicted of murder spending 23 years on Arizona’s Death Row.
It would be indeed tragic if Hollywood does not fully exploit Van Houten’s entire gift as an exciting and energetic performer.  The losers would be the deprived audience and Hollywood’s financial investors.

As that Amsterdam rag, Metro was suggesting van Houten was finished real entertainment news was published by Hollywood’s Variety!
In Berlin a deal is being inked for a biopic film called, RACE on 1936 Olympic legend Jessie Owens who picked up four Gold Medals right before Adolf Hitler’s own eyes.
The film will star newcomer UK actor, John Boyega as Owens and he will be joined Jeremy Irons and Geoffrey Rush in this film.  The director is going to be Stephen Hopkins.
Presently they are fighting to bring Carice van Houten in to play Hitler’s pioneer filmmaker; Leni Riefenstahl.
Riefenstahl created a cinematic masterpiece filming the 1936 games with camera techniques that are still copied and used today in Hollywood.
Riefenstahl is a rich historical character who aligned herself with the Nazis to enabled her to make films with bottomless budgets.
Riefenstahl's work was so well done that when the war ended they wanted to try her as a war criminal.
Thankfully cooler heads prevailed and Riefenstahl was able to continue her work, unfortunately without the budgets she was used to having.
I know this will have a terrific script and can’t wait to see the film.