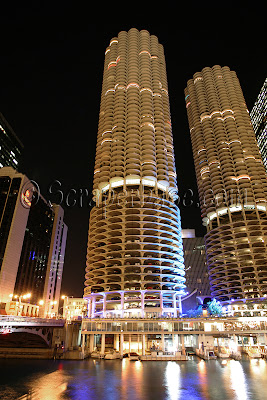 Chicago, IL—I lived at Marina City for about eight years during the 1970’s.  It was a safe place, well at least people thought so, but I soon learned ignorance was bliss.
In this nice building containing 900 apartments there was a grocery store, drug store, dry cleaners, a three screen movie theater, ice skating rink, bowling alley and health club.  Of course don’t let me forget the marina below that could at one time store 900 boats.
I was one of several cops that lived in the building. As cop we had perks such as the ability to park and retrieve our own cars.  The parking garage needed all the help they could get keeping local thugs from stealing cars or vehicle contents.  Of course our encounters with criminals were, for the most part  kept under wraps as not to disturb the residents.
I liked to walk to Pizzeria Uno or the Billy Goat to bring back some of what I consider the more important food groups.  Occasionally I’d encounter prolific African-American criminals  out on the prowl looking for victims at night.  I had tombstone courage back then and usually a large gun or even two to deal with anything dangerous.
I also handled security at an off-duty gig at the old Continental Trailways Bus Terminal at 20 E. Randolph.  Sometimes it was a chore to be able to avoid trouble while walking to this job because of the local thugs.  Yes, I made numerous arrests near Marina City over the years.
Crime in the building was somehow considered rare to Marina City residents.  I guess two known murders, a dozen home invasions in a decade qualifies as rare.
Of course there was that one-man crime wave during this period by one of the brave knights hired by the building to keep it safe.  Al Washington was an armed and uniformed guard licensed and working for The Andy Frain Security Company.
Somehow Washington got ahold of the master keys to the apartments.  This was during the transition period when the building was being converted to condominiums.  Washington simply entered apartments and took whatever he could carry.  Cash, guns jewelry, cameras simply vanished.  We could only imagine what the highly identifiable and recognizable Washington would have done to anyone who discovered him in the act.
During that period there were more than a few people that were thought to have committed suicide after they fell, jumped or were pushed off their balconies.  It was always the same, their bodies created a monumental mess and police would find their apartment doors locked.
It was manager Morris Swibel, not the cops that cracked this case by grilling the nervous and sweating Washington in his office.  Swibel suggested that the security guard wipe the sweat off his face.  Washington pulled out a handkerchief  from his pocket and the master keys popped right out on Swibel’s desk!  I can’t prove Washington murdered anyone but I can’t help but think about that suicide scenario.  Of course Washington had the keys, motive, means and opportunity.
If you wonder why I write about this now, it is to educate the residents of Marina City and similar yuppie apartment dwellers of the very real dangers that they often don’t appreciate.  These are the same people that wear seat belts while driving cars and helmets when on bicycles.  But they’re never prepared for the very real possibility rape, robbery, or murder.
My neighbors in the 1970’s were no different than today’s residents.  They thought that the cops and building security workers were quick and efficient.    The truth is that that’s a myth for sure.  There’s never a cop when you need one.   Jim Reardon was both a cop and armed when he was murdered in the walkway by the old  Marina City coffee shop.
Folks, despite what you have been brainwashed to believe.  It is you, not the police or security workers responsible for the safety of you and your families.  Most city dwellers are simply brain dead when it comes to planning how to survive.
A whistle, cell-phone or a can a pepper spray is truly worthless in the face of a determined attacker.  You are going to take a trip to the hospital or morgue if you are not prepared to take meaningful steps to protect yourself.   You need training and a handgun as much or more than seatbelts and helmets.
Don’t worry about Chicago’s unconstitutional gun laws.  They are no longer enforceable anyway.  Training is important as well is a sufficient size gun.  Use the gun if you must then flee for your own safety after you use it because your attacker/s may have more accomplices nearby.
Do not call police or answer questions if they contact you after a shooting.  Ask for a lawyer.   You have no duty to report your use of deadly force or answer questions.  Any lawyer will tell you that cooperating with police after a shooting s a terrible idea.
Go home, settle down and be glad you survived.
It’s time that you reevaluate your own worth as a person.  You are important to your families, employers and friends.  You have an absolute duty, not just a right to protect yourself.  Don’t let Chicago’s pathetic politicians deprive you of your right to exist.
If you wound or kill an attacker,  it was him not you that sealed his fate.  You also will be doing others a favor by incapacitating a dangerous felon perhaps forever.
Posted by Paul Huebl Crimefile News at 7/13/2012 08:12:00 PM

Paul again you're recognizing how to fight crime.

Any lawyer will tell you that cooperating with police after a shooting s a terrible idea.

Absolute fear mongering. One guy years ago you're assuming murdered people by throwing them off the balcony and you you're trying to make us live in constant fear that it's going to happen again. Carrying guns will make everything worse not better.

Fear mongering, you say? Old crimes that have no relevance today?

I have no problem with gun-rights hating Liberals as long as they keep their pinions about self-defense to themselves. The problem I have is when they demand I take the risks and force me to submit to violent criminals.

There’s no shortage of work for the medical examiners in America. I will make sure I’m not on some autopsy table because I did not do all I could to survive the very real threat of violent crime.

Marina City is not somehow safer today because of Chicago’s gun ban or the refusal of law-abiding residents to seek a meaningful way to enhance self-defense.

For me carrying a gun over the last four decades has not only save my life but the lives of others. Not only while I was an on-duty cop but while off-duty and as a private citizen. I will chose the best way to insure my own safety without the dictates of gun-rights hating liberal swine.

As for law abiding people carrying guns the statistics are in and clear from every jurisdiction outside of Illinois where the practice is not banned. Violence is down and so are gun accidents.

We can all make our choices but was it fear mongering when state laws everywhere made wearing a seatbelt while driving mandatory?

You’ve got an absolute Constitutional right not to incriminate yourself. That means you cannot be forced to report to 911 on yourself! You should always as a matter of sound legal advice not to communicate with the police beyond asking them for a lawyer. So when you are forced to defend yourself or family the words of the day are SHOOT and SCOOT!

It was interesting reading the anecdote about Marina City and crime in the nearby vicinity. There are many (too many) cases of security guards at supposedly secure building committing robbery, theft, assault and rape against the tenants.

And Paul can probably attest to the fact that there's a lot of crime that does not get reported by the newspapers. When I visit my barber I'm always shocked at the bad things going on in my Illinois city. He hears this stuff from cops who are his customers and much of it is not reported.