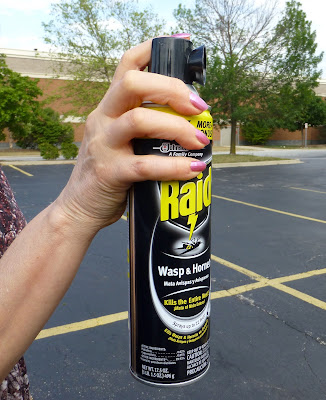 Chicago, IL—I had lunch yesterday with a lovely retired lady cop in the Windy City.   She has enjoyed retirement as she plots her exit from Illinois tax slavery and this corrupt and bankrupt metropolis.
After lunch I walked this gal to her car and we talked about how the law abiding citizens and how they are forced to become bait for mobs of thugs by unconstitutional gun laws forced upon them by moronic politicians.  To my surprise she had a very creative and effective solution!

With the plague of criminal Flash Mobs violently assaulting tourists and yuppies in Chicago's Loop and Near North Gold Coast areas people need protection.
Of course because of HR 218 (The Law Enforcement Officers Safety Act) she can carry a loaded firearm nearly anywhere she wants.  But her first line of defense is not the gun!  She’s got a big can of Raid Insect killer!
As scientists have raced to find non-lethal and non-toxic sprays like tear gas and pepper spray that will only temporarily disable an attacker there are other ways.
The pepper sprays are not so reliable.  Drunks  and insane attackers don’t respond well to the gentle applications of the non-lethal stuff.
The answer is in the deadly chemicals the Insect killer provides.  Permanent blindness and death can result with the application.  Of course you need to get the spray to your attackers before they get to you.  The Wasp and Hornet spray is perfect because it’s designed to spray 20 feet to kill entire nests of these aggressive insects.
No cop can arrest anyone for mere possession of a spray can even though many jurisdictions have gone out of their way to ban even non-lethal defense weapons!
Of course deploying insect spray on an attacker must be because your attackers have reasonably placed you in fear of being beaten, robbed, raped, seriously injured or killed.  Anytime you have more than one attacker deadly force through the use of deadly weapons are justified.
It’s really very simply spray your assailants directly in the eyes and faces.  Let the thugs suck in the fumes of today’s version of Zyclon B!  Then make your escape.
As always if the police are able to locate you later you should immediately say nothing beyond requesting to have a lawyer.  Don’t deny or admit anything!  Of course telling them you had to use the spray to defend yourself may well get you arrested.

The wasps in AZ drop instantly when hit with this stuff. It can be used with reasonable accuracy from 20+ feet. (One can doesn't last long, however.)
Of course, the baddies could do the same and I'll bet this stuff works just as quickly on WASPs as it does on wasps.

Been carrying a can since the mid 80's.

A friend suggested keeping a loaded flare gun in the car for protection. Any thoughts on this?

Welcome back to Chicago Paul. It would be a honor to meet you in person when you are in town. CPD Retired.

A tube sock full of C cell batteries would go well with the bug spray, Spray em good them wear them out with the "Battery Pack". Let them call 9-11 Ha Ha!!

Get out of the treacherous shithole Chicago before you get killed, robbed or taxed to death Paul.

A jumbo size can of WD-40 and a zippo can do wonders at close range.

Anonymous said...
A friend suggested keeping a loaded flare gun in the car for protection. Any thoughts on this?

Those Orion boating flares that fit the 26.5mm flare guns and also 12 gauge shotguns will bounce off most hard objects.I tried testing them and they do not stick or penetrate like in the movies.