Why are Some Arizona News Organizations Fighting in a Leftist Propaganda War? 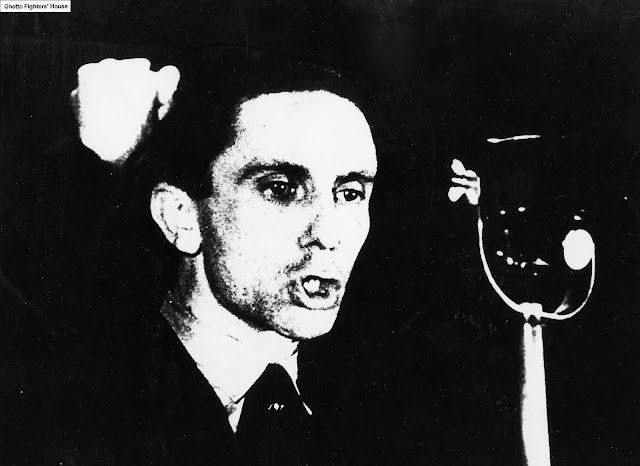 Phoenix, AZ—Josef Goebbels said it well, “If you tell a lie often enough it becomes the truth.” This was one of several translated and paraphrased versions of the famous quote. It speaks volumes and reveals the propaganda expertise of a broadcasting genius employed specifically to handle public relations of the Nazi Regime of 1933-1945.

The truth is that although their power is rapidly waning too many broadcasters tell their audience what they want them to believe. To broadcast or publish commentary and opinion as they express a sacred First Amendment right is certainly reasonable and constitutionally protected. To bundle opinion inside of slanted news story shaping it for convincing others is not news but simply propaganda. Yes, that’s protected too.

Reporters and producers have immense power and Goebbels perfected its use to denounce Jews as criminals and parasites. They constantly warned the German population that the Jews were out to steal everything. That massive government, hate campaign made the confiscation of property and deportation Jews seem reasonable. No media organization anywhere ever exposed the carefully guarded Nazi secret of the Holocaust that they were engineering in Eastern Europe until it was discovered at the end of the war.

In America we had the closest political ally to another horrible despot, Josef Stalin using the radio for captive audiences for his Fireside Chats. That of course was Franklin D. Roosevelt. In the end only the war criminals of Japan and Germany faced justice. The Russian pigs murdered many millions and raped every woman or child they could find in Berlin for years during their occupation. The Russians escaped any and all justice for their massive war crimes altogether.

Okay we have to face the reality that the winners of wars never are prosecuted for their criminal acts and adding insult to injury, they get to write the history books too. Everything was branded by the broadcasters as good or evil depending on the opinion of the day. Heroes were turned into bums and bums were rebranded as heroes through the power of broadcast media and newspapers.

Currently in Arizona there is an epidemic of outrageous propaganda. Several news organizations have decided for the residents what public policy is right or wrong. Yes these news writers are on the extreme Left of the political spectrum. They have waged a propaganda war legitimizing criminal conduct and special harassment of anyone that disagrees. That’s the way it is at least as they see things. Americans have elected lawmakers that established immigration policy. Every nation has laws that restrict who can enter their borders. We have created a system and despite the fact there is insufficient support to repeal the laws many of our officials choose to criminally obstruct justice.

Some media organizations have gone so far as to take it upon themselves to legitimize the non-stop alien trespassing. To make matters worse they have waged a propaganda and harassment war on any officials that make any effort to do their sworn duty. The favorite targets of the propaganda wrath are Governor Jan Brewer, Sheriff Joe Arpiao and Former state Senate President Russell Pearce.

For over four years there has been an accusation floating around about Barack Obama lacking the Constitutional requirement of being a natural born American citizen. Obama never once was required to prove his eligibility for the nation’s highest office. Americans need to show a certified copy of a birth certificate for all manner of participation related to government services. Obama was never properly vetted and rather than settle the issue paid lawyer well over a million dollars to avoid answering questions or producing the document.

Finally one day a purported birth certificate appeared on the Whitehouse website. It did not look right for a multitude of reasons. Several document examiners who are court certified experts say that it’s a fake that was created perhaps from a genuine birth certificate belonging to someone else. It’s been forged to be what it is not, a valid birth certificate.

When Sheriff Arpiao announced the findings rather than the local news organizations question the evidence they simply attacked the messenger, Sheriff Arpiao. They dominated the news conference with questions about immigration enforcement, and efforts by other government officials seeking to unlawfully eliminate immigration enforcement. Certain Arizona media organizations are dedicated to destroying any and every politician that does not share their Leftist agenda.

These Leftist propaganda machines of Phoenix simply ended any effort to report legitimate news. They instead take flack for and defended the politician of their choice to that they prefer to lead this nation. They do this under the color of journalism I say it’s wonderful to see the democratization of news since the Internet gives anyone the ability to reach millions with text, audio, photos and video.

Americans are beginning to feel their might as the days of the propagandist’s stranglehold on broadcasting and publishing are coming to a rapid end. For now only the inhabitants of America that are caught on the wrong side of the digital divide are saturated with disinformation from the Left. The good news is that poor and ignorant are of little help to media sponsors.

The so-called mainstream media is quickly fading off to the sunset as their former advertisers are now spending their money on YouTube citizen journalists. The political Left and their propagandists are in the fight for their lives.

They lost control over radio and now the emerging Internet informs more Americans every day about their rights to Liberty. Frankly the taste of freedom trumps anything that the Left has to offer.

What the Left can’t win with ballots they have a rich history of winning with bullets. We need to error on the side of freedom and liberty or we will have none. Not if but when they try this, Americans will be shooting back.

In recent years, KPHO-TV news in Phoenix has shockingly taken a sharp turn to the Left. Meredith Corporation really should stop pretending that they are broadcasting news. I will cite the example of investigative reporter Morgan Lowe who appears to be on a campaign to destroy anyone who shows any inclination to support immigration law enforcement.

Lowe is a bright fellow who happens to also be a lawyer and solid First Amendment Zealot. The sad part is Lowe’s love for freedom begins and ends with Free Speech issues. Lowe has been using his media position as a propaganda agent for the far Left. Whatever Lowe is doing, it’s not simply reporting news, he’s trying to sway, mold and control public opinion.

I have no difficulties with Lowe for advocating for the Obama Administration and to simply repeal existing immigration laws. I am personally committed to pick up a sword to fight for his right to do that. However it’s just not ethical or honest to deceive the public with this news-reporting masquerade. KPHO and any other organization that wants to advocate politically should rebrand their products from news to opinion and commentary. The so-called fairness doctrine thankfully is long dead. I see the current media propaganda effort as the final effort of a once important sinking ship with no hope. Down the road we will see reruns of old popular TV offerings like the Three Stooges in the time slots formerly held by proud journalists that had the ability to report news rather than advocate the direction of public policy.

News reporting will probably never be free of slant or advocacy. The bloggers seem to have offered a somewhat refreshing product of diverse opinions. The bloggers for the most part are only now gaining funding and learning how to gather and break news to our world. When that happens what we used to call the mainstream media, as we knew it, will be dead.

the dude in the picture looks alot like rahm emanuel's uncle.