Prisons and Jails Could Save Needed Millions with E-mail and Skype for Inmates. 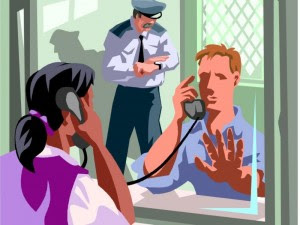 Our prisons uniformly hate the idea of making any technology available to inmates.  Prisons and jails by necessity employ really low wattage folks that cannot grasp even the simplest of computer tasks.
Right now any mail to inmates must be opened, read and examined for cleverly concealed narcotics.  That costs a bundle and sometimes seriously delays the mail to the inmates.
They need not make computers available to inmates but they could create inmate e-mail accounts for purposes of simply receiving the mail.  Two things swill happen.  For one, the inmates will get more mail but the likelihood of smuggled narcotics is totally eliminated.  The second is that it will be a lot easier for staff members to save the communications for intelligence and investigative purposes.
If e-mail was instituted it could be a perk granted or withdrawn as inmate behavior dictates.
I’m also a big fan of Skype.com to replace maximum-security non-contact visitation.  Why waste resources searching and dealing with visitors when they need not even enter prison facilities?
Pass this idea on to prisons and governors everywhere.  Inmate families are usually poor and prisons are located far away from them. Why victimize families for what an inmate has done?
Posted by Paul Huebl Crimefile News at 7/18/2012 11:12:00 PM

God Bless the victims of the massacre in Colorado.

Something is amiss here, the BBC had up to the minute coverage of this horror prior to the American MSM. IE; CNN, DRUDGE, AP.


This was the act ofa solo psychopathic 24 yr old who was allegedly made Batman was soldout. Definitely not logical and highly suspect.

Was this a false flag or the acts of a Manchurian candidate to advance the UN disarmament of the American public?


The one worlders would gleefully sacrifice the innocent blood of American citizens to advance their satanic agenda and the enslavement of humanity.

At least some of the Federal prisons do this through corrlinks.The inmate sends you an e-mail and you must fill out permission for him to e-mail with you. Not a bad idea.