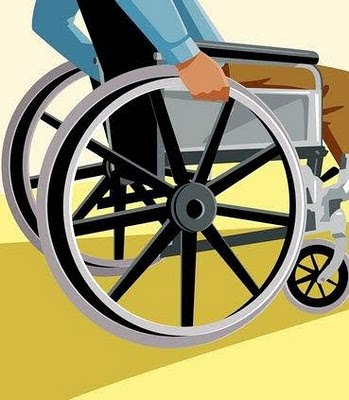 Chicago, IL—A local newspaper did a front-page story on cops who were deemed injured on duty and unable to do police work.  The story seems to suggest abuse and malingering by those injured while protecting others.
They cited a few officers that went on to new careers and have left the city never to return.  I can’t really see how this is newsworthy.  Millions of people receive similar benefits, though most are from private insurance plans.  Some of the insurance plans are far better than others.  The City of Chicago is self-insured.
Cops must say fit as they face injuries constantly.  People assault cops on a regular basis and a busy cop gets slammed into walls or worse routinely.   The rough stuff for cops begins in training where recruits are injured in defensive tactics and physical agility classes.  The human body can only take so much abuse.
The City of Chicago used to have a light duty program for injured cops.  I remember a cop confined to a wheelchair that was assigned as a police dispatcher despite his double leg amputation.  He proudly wore his police star and gun every day.   He lived to work in his chosen profession.
For some reason the city became committed to disarming injured cops whenever they could.  The Illinois courts however ruled that a disabled cop on pension was still a peace officer and could carry a gun whenever they wanted to do so.
Cops like anyone else have the right to convalesce anywhere they choose including Europe.
It was the city that made some peculiar rules  that prevented officers from working limited duty assignments.  Frankly many of them would rather remain somewhat active in a limited capacity than to vegetate at home doing nothing.
If an officer can’t work at the position he was hired for he should not be penalized for attempting to take up another career.  Perhaps some think these cops should just curl up and die rather than try and function.
Officer Jim McMullan was nearly killed and remains a quadriplegic after being shot on duty.  He began a second career as a TV reporter at WBBM-TV.  Needless to say that was an overly ambitious effort that could not be sustained because of the excessive cost to transport the crippled officer around town to work.  He has since began marketing applesauce from a family recipe.  Is it fair for the city to try and destroy this officer’s attempt and staying useful?  This hero is only alive because he has had the will to not let his devastating injury destroy him.
I guess we can extend this discussion to Social Security that gives disability benefits to criminals and drug addicts because they are unemployable.  Members of Congress and politicians everywhere get wonderful benefits.
We generally consider public safety workers worthy of the promise that if they are injured taking risks on our behalf that they will be treated well.   We cannot lose sight of what we ask these men and women to do for us.  We must continue to protect them and their future.

The Sun Times is not worthy for me to wrap dead fish inside. this story was inflammatory and designed to rile up cop haters.

BECOME DEPRESSED OR A HEROIN JUNKIE YOU WILL GET DISABILITY RIGHT AWAY!!

Police Officers are like soldiers. They are the pawns of politicians. They praise them or damn them when it is to their advantage.

becogireCmon,, We all know there are low-lifes and good guys in every profession. You don't judge them all by the low lifes.

For all of us who complain about people getting SSI, who will have the courage to put an FOIA request and then release the names. Numerous requests will have to be made by many people. Will the bloggers lead the way or will they worry more about revealing themselves?
No one should get a free pass to game the system regardless of what job they do. the legitimately injured should be left alone, the scammers should be fired. It is the old case of, I am offended at those who benefit unless it is I who benefits.

Let's admit it, we all know who the scammers are on that list.

And we know who the legit ones are...but for the grace of God, go I.

One last thought, I would love to be that cop on duty disability since 1998--LIVING IN IRELAND!!! lol. Wow life is good.