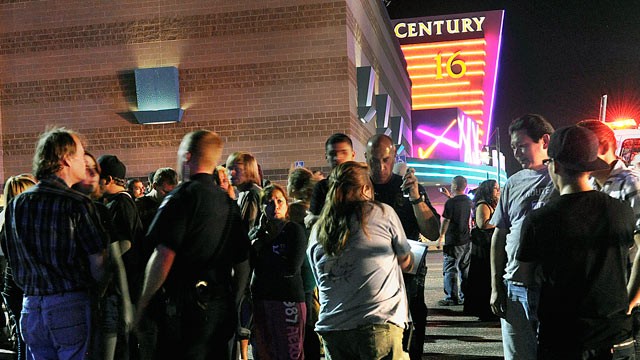 Aurora, CO—The nation is saddened by this the senseless killings by a gunman taking advantage of another Gun Free Zone.
The Liberal gun rights haters won’t let the investigation unfold or the bodies of the dead get cold before they suggest all manner of blame.  The Tea Party has already been blamed and I’m waiting to hear that it’s Bush’s fault.
I too need to investigate and weigh in on this tragedy but first I need some simple facts.  Just who is 24 year-old James Holmes? How does one transition from a promising medical student to mass murderer?
PhD students don’t usually surface in violent events so there must be a lot to learn about mental health system failures and such here.  We can all guess what motivated this guy or where his weapons came from.
The deadly explosive devices police say he placed in his apartment were not purchased at some local Walmart.
Before I begin to assign blame I will have more than wild and unsupported accusations to make.  I’m sure this disturbed fellow placed lots of information around the web we can study.  Let’s look for it and then we will talk.
By the way I don't think this will somehow win votes for Obama.
Posted by Paul Huebl Crimefile News at 7/20/2012 09:24:00 AM

Never let a good crisis go to waste!
Lib MSM already blames Tea Party(ABC News), Rush L. , not Bush yet!... more to come i am sure .

I like the way you think. Get the facts BEFORE you come to a conclusion. I used to think this was the way the media operated but these days it's whatever gets a headline. Pathetic. Even the FBI came out right away and proclaimed that this incident was not terrorism related. Now how could they possibly know that at this early stage? Once the investigation is complete, this lunatic should be classified as a domestic terrorist and shipped off to Guantanamo Bay where he can cool his heels for a decade or two until he is found guilty and executed.

Both sides are acting as expected. The anti-gun people will say that no one should have a gun and this is why. The pro-gun people will say that someone should have been packing in the theater. The casualities will have been fewer. Both sides will bloviate to make themselves sound important. Politicans will talk just to hear their own voice, and try to change things.People will be fearful for a while. After sometime, life will be back to normal. we will learn nothing.

IWhat is it with these Batman Movies both directed by Christopher Nolan. I know they are a little dark. I wonder if this dark material attracts other dark forces unseen? Aurora or Aura?

Heath Ledger was the Joker in the Dark Knight and he died before the film was released. Now a maniac playing a joker in real life has killed at least 12 people watching the Batman movie and harmed countless others who if they survive will be traumatized for life.

Batman may soon if not now - have the same status as Rosemary's Baby vis a vis Dark Forces.

the composer of the music score for the film died of a brain clot, exactly the same way a character in the movie died

the producer of the movie, William Castle, swore the movie was cursed and nearly died of kidney failure shortly after the movie was completed. While he was in the hospital hospital staff said he was crying out "Rosemary drop that knife" while being treated

Much of the movie was filmed outside of the famous hotel "the Dakota" where John Lennon was shot to death about 12 years later. weirdly Charles Manson called his killing spree helter-skelter, having been inspired by a John Lennon song.

and two years ago a former Playboy model, who made a small appearance in the movie playing herself, has been arrested for murder

After sometime, life will be back to normal. we will learn nothing.


gee, frank, you sure seem to be the eternal optimist on this one.


are you always this cheerful?

No question, a tragic event.

But when it comes to local and national TV coverage of this incident, the best tact is to turn it off. No new information, video of people standing in the parking lot, .....the same stuff over and over.

And were I in the theatre that night sitting in the last row, what would I have been able to do? The most likely answer is nothing.

Godspeed to all family and friends impacted by this event in Aurora, CO.

He may have been experimenting with drugs he obtained in the neuro science lab or ingested something by accident, or poisoned by someone else at the lab. The news has named the incedent the Colorado shooting rather than the Century theater shooting, so the theaater chain, (Hollywood controlled) doesn't suffer bad publicity. 24 less than 24 hours after the shooting, ABC news put this spin on the story, that blacks are 8 times mor likely than whites to do something heroic in such an incedent, and hispanics are 2 times more likely. So this tragedy has provided the liberal press with some propaganda fodder in less than a day. I'm sure there is more to come.

the only thing to learn from this incident, and all the other murders going on in the U.S; is that the 2nd Amendment is more valuable than ever, in ANY time, in America. Who will defend us from armed, evil Maniacs? The Government ? Ha-Ha. The police? Ha-Ha-Ha. Neither can no longer walk and chew gum at the same time, as evidenced by the massive crime rates in the US, ilegal drugs, gangs, AND the massive Debt and disorganization our Country is in, due to corruption, greed, gross incompetent Leadership, etc. And THESE are the MORONS that us Taxpayers should count on to protect us? Give me a break. This Country has just been FAR too LIBERAL for the past 50 years. Remember this 4th of July? Did you see/hear all those ILLEGAL Fireworks going off ? Did the Police stop them? The CAN'T. Then WHAT makes anyone think they can control anything else illegal, and guarantee our safety?
The People's Right to Keep and BEAR Arms shall NOT be infringed upon.
GOD BLESS AMERICA. PRAY FOR OUR COUNTRY. COMMUNISM [DEMOCRAT PARTY] IS ON OUR DOORSTEP, PUSHING ITS WAY IN.


they never let a crisis deter their agendas.

In Re: The Liberal gun rights haters have blamed the Tea Party and Bush...

The liberals and the MEDIA did not label the Fort Hood Incident a terrorist attack - and because it was not SO LABELLED- THAT MASSACRE OF INNOCENT AMERICAN PEOPLE ON AMERICAN SOIL WAS COVERED UP BY THE ADMINISTRATION.

Plus -even if the real life diabolical but brilliant Joker Holmes is American, the terrorism is occurring under Obama's watch, and the liberals need to - and are TRYING to deflect this horrific incident on to the Tea Party, so as to avoid blame.

«TRYING» is the operative word...and this is what politicians and others in power do! Blame somebody else to escape culpability.

Did 03:53 mean the suburban cop could NOT carry his sidearm? The ILCS applies evenly throughout the state to all peace officers but pantywaist asshats put their own spin on things citing private property bullshit. An example is Great America or the music venue in Tinley Park as examples where we cannot carry. Those examples are wrong as they are licensed premises NOT private property but no one has the balls to challenge it (hint hint FOP and PBPA). What if Woodfield Mall put out a sign that said no guns allowed including police? Same for the big stores, K-mart, Wal-Mart, Jewel Foods.....big signs saying no guns allowed including police....what then? Under the same logic they are private property and can bar us from carrying our weapons. Something needs to be done and the FOP, PBPA and our fellow officers in the state legislature need to move on clarifying legislation to stop this anti-gun, ANTI-POLICE policy that's going on unabated!

Paul, this posting was on SCC. Does it make sense to you or did the poster leave something out, like a law that's not referenced?