The Big Mistake by the Obama Birth Certificate Forger 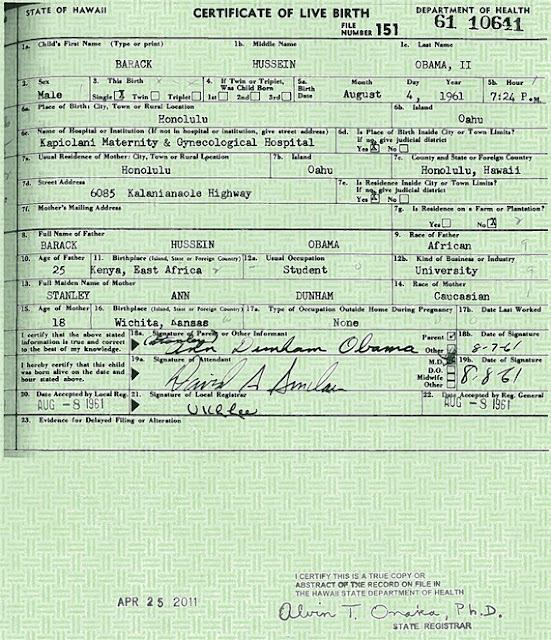 Phoenix, AZ—Sheriff Joe Arpaio deserves criticism for the treatment of prisoners not convicted of crimes being held in his jail.   Those are arrested people that deserve the presumption of innocence that Joe’s punitive jail mocks.
Joe failed in his selection of a disloyal Chief Deputy that had been a really poor choice.  On the other hand a loyal and fine man was castigated and banished from his administration in error.  Joe is a lot of things and perfect is not one of them.  I have known Joe from before he was elected.
I do agree with him on many issues.
I have to respect the science of document examination and the evidence there points to the forgery pictured above.  There are also serious signs that the forger of the Obama birth certificate released by the Whitehouse did not understand codes and numbers associated with the document.  Analysis of the numbers and code revealed that the document is not genuine.  The evidence is more than compelling.
The biggest error came as a result of the age of the document forger.  He or she was obvoulsy too young to be aware of correct terms used to classify what we today call African-Americans.  The creator of the phony document listed Obama’s race as African.  That is a huge red flag because that term was not applied as a race title until well into the 1980’s.  That term and the moniker, Black would have been considered politically incorrect and racist back when Obama was born.  The proper term throughout history until the late 1970’s was Negro. The government did not change this until well into the 1980s.
Additionally the United States government standardized the acceptable terms for all identification documents.  Eventually Negro became an apparent derogatory term that sensitive politically correct Americans abandoned in the 1980’s.
This so-called birth certificate document was the product of a criminal conspiracy.  It needs to be investigated by Congress and the State of Hawaii.   The problem here is politics prevents the orderly administration of justice.  Democratic politicians have total control and are breaking the law by obstructing justice.
Law and order has broken down in America and the government is now lawless.  All Americans have a duty to insure justice is done.

So true Paul. Our Criminal Justice System is totally corrupted, and severely biased. This is living proof that our Government is Corrupt into the Bowels of this Country. One can be completely right in this society, and end up in prison, one can be totally wrong in this society, and end up not-guilty and free, walking the streets to commit further crimes. Cowardly, greedy, arrogant, no-balls politicians of both parties go right along with it. Even Supreme Court Justices of the US are Corrupt. The Country is on Life-Support and won't last much longer. Unfortunately for most, there is nowhere else to go.
*INSANE FISH*

Nothing will come of this,Nothing.

Looks legit to me.

One big mistake by the author of this piece is that it is Obama's father and not OBAMA, himself, that the term African is used for on the birth certificate. But as anonymous at 11:16 said, it ought to be deemed a joke by the "U.K.L. Lee" signature. That was top notch.

Who cares if it was his father the race block was for, what does that have to do with anything? The info is still incorrect. And it's not U. K. Lee, its V.K. Lee, this was addressed in the press conference you obviously didnt bother to watch.

Lame. Just tell us the signature isn't there at all if you're going to insult everyone.