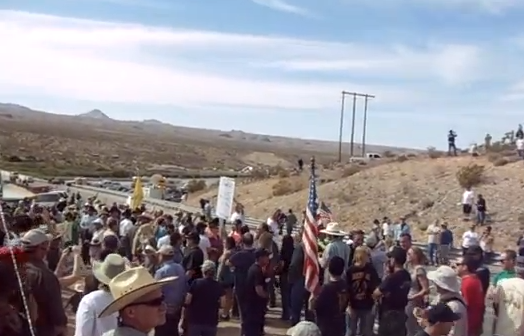 Bundy Ranch, Nevada—About 80 miles Northeast of Las Vegas the scene was a cattle ranch and the sprawling rangeland around it.   On one side were BLM Rangers with battle gear and dogs.  Men and women trying to convince the rangers to leave them, the cattle and the ranch in peace occupied the other side.  Tensions were high as the rangers threatened to shoot the civilians.

Because the area is rural sources for water, prepared meals, ammunition was greatly limited.  The two sides had gathered ready for a very violent conflict. .
The Barack Obama worshiping network media did not want the nation seeing the heavy hand of their Messiah crushing a longtime cattle rancher and his supporters.  That would damage the carefully crafted image they created for him.  They will always avoid humiliating Obama at all cost.   However Social Media and some news organizations covered the resistance movement really well.
Because of Social Media, thousand of civilians understood that a rogue government was waging a terror and harassment campaign against a family under color of law.  Some of them traveled many miles at their own expense and personal risk to protect a targeted fellow American.
For now the tyranny was halted.  I’m sure that Obama and his henchmen are fuming because of their humiliating failure.   The Second Amendment was exercised effectively and successfully.
Both sides of the conflict understood that there was absolute resolve by the assembled resistance to begin bloody combat and that threated government agents.  I also suspect that those agents began questioning and perhaps balking at orders from the Whitehouse.  That too may have made a difference that, for now that ended the confrontation.
Were the defenders of freedom properly prepared?  In this tactical exercise we could see how the raw power of government can quickly take steps against the population.  During this siege the government exercised their ability to quickly shut down cell-phone towers disrupting the civilian communications.
The Whitehouse also ordered the FAA to declare a No Fly Zone so news agencies could not observe or report on the government siege with helicopters.  Government officials did not want murders civilians to be seen by the rest of the nation live on television.   This FAA No Fly Zone order certainly had nothing to do with public safety!  Entering restricted air space could easily result in a military response including the shooting down of aircraft.   It’s not some idle threat.
The steps government thugs followed the current tactical blueprint of how they are prepared to deal with civilian resistance to the Obama Junta.  Our rogue government played their hand showing us those things we must expect.  We need not guess anymore what they might do.
We learned that Just having sufficient numbers makes the most important difference.  If you have the numbers pragmatism by the tyrants can rule your side.
For the most part the government is generally able to control the immediate shipment of food, fuel and medical supplies to any area.  They can control most of but not all the electricity, natural gas, cell-phone communications and Internet.
The need for water, water filtering material, solar power and generators for communication devices lights are a must.  Wilderness survival skills are second nature to most military veteran and hunters.
To combat the communications cut off everyone needs to have inexpensive family service walkie-talkie radios available ant any Target, WalMart, Best Buy or Amazon.com for a secondary communication source.  They work for miles and that beats nothing.  There are also citizen’s band (CB) radios and Ham radios and the later can communicate globally.  There are also satellite telephones used mostly by sailors on the high seas were cell phone towers don’t exist.
Getting overhead video of such scenes inside an FAA no fly zone is a snap these days with those new camera-drones no larger than a small pizza.  They are so small that they are very difficult to spot in the sky or take out by gunfire.  They can observe with HD video and report things that our rogue politicians want kept secret.   The drones are easy to fly and there are cheap versions coming in at less than $1,000.00.
The use of American military and police against neighbors and relatives has a built-in fail-safe mechanism.  Those people all swear an oath the Constitution and not to any politician.   If they are real Americans they will be able to recognize unlawful orders and must disobey them.
Unfortunately our government has thousands of armed contractors that function as well-paid mercenaries that take no oath.  The contractors know they will be able to rob, rape and murder unfettered during civil unrest.  We must demand laws be enacted that contractors are never permitted to perform military or police operations within American borders.
Today with Internet capability broadcasting live streaming video reports on the Internet direct from the scene of combat operations is relatively simple.  Of course the opposition will be monitoring the reports too.
The skinny on combat rifles is that the most common and popular combat rifles are ineffective for government resistance.  The .30X39 AK-47 round and the 5.56 MM M-4 platform rounds are carryover from close in jungle warfare in Viet Nam where no real armor was involved.
Today’s modern military and police armor both for vehicles and body is rated to stop the 5.56 MM and .30X39.  However that armor is very vulnerable to penetration by common WWII rifle rounds such as the .30-06 and the .308.  Most American hunting rifles use the same or even larger rounds and can defeat the light armor, but those guns are greatly underrated these days because don’t look as mean.  I’ll take a 75 year old M-1 Garand over a M-16 anytime.  The FNFAL and M-14 are far superior to most of what our police and military uses.
Political tyrants are in fact are always the ones pulling the triggers even more so than their thugs.  Whenever possible they should be tracked down and captured.  It’s impossible for them to order any military action if they are missing.
The most important need is for absolute determination, resolve and courage to preserve our hard won liberty and freedom.

I agree with everything you said Paul but there is one little problem. The guy is a thief. Good point about fire power. Never thought about the caliber selection. I was going to buy another M4. Perhaps a M14 would be a better choice, And communications. I need to do some more work there as well.
Thanks

Any recommendation for a powerful rifle that can be owned in New Bolshevik ground zero of Chicago?

This is all a Harry Reid game to pad his son's pocket with the help of China and the American Tax payer used as a dupe to foot the bill...

Did you think he wouldn't be paid off by Heir Obummer?