LAPD Has Bad Some Advice For Those Facing Armed Robbers 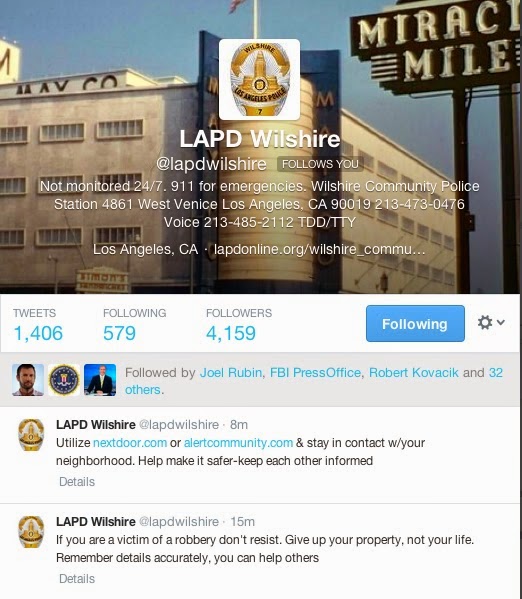 Los Angeles, CA—I spend a lot of time in L.A. when I’m not in Phoenix or Chicago.   The crime rate here is climbing because of prisoner releases by California Corrections and the Obama Administration dictating the mass release of criminal aliens.  I don’t know where this is going yet.  Hopefully, I’m as prepared as I can be if a thug or thugs actually select me for victimization.
The good news here is that in two separate rulings the Ninth U.S. Circuit Court of Appeals has ruled the current scheme that bars people from carrying concealed weapons for simple self-defense is unconstitutional.
The current law is now unenforceable.  Some California Sheriffs already began processing thousands of new CCW permit applications because the Supreme Court settled this in McDonald vs. City of Chicago.
The Mugger, Rapist Killer Protection Act (as I call it) in California is about to die a quick death.  The reasonable expectation that potential crime victims are unarmed will be a memory.   Darwin is about to begin collecting the tarnished souls of many really dumb criminals.
L.A.P.D’s Wilshire Division just tweeted that if you’re confronted by robbers, don’t resist and to give up your property.  They suggest this may save your life.  There are plenty of things that can go wrong and despite full cooperation you still can be murdered.  I won't fault the advice if you are untrained and unarmed.
I’m a believer in conflict avoidance.  I will for example avoid confronting suspicious people around my car or home.   That’s why we have cops.  However if I’m somehow in a trap I’ll never cooperate.  I will pretend and show fear and quickly give the bastards all the hot lead I can.
There is absolutely no guarantee that with all of my military, police and civilian firearms training that I will survive.  Among cops I rank in the top five percent of our shooting scores.  The average gun owner never gets necessary training to deal with rapid fire, night fire and multiple assailants.  That brings me right back to conflict avoidance!
Even if my gun mortally wounds my attacker/s that does not mean they won’t succeed in killing me before they die.  Instant kills are very rare except in fictional motion pictures.  Once again, that brings me right back to conflict avoidance!
My gun does not make me taller, stronger, braver or smarter.  It only gives me a much better chance of survival if the unthinkable happens.
If you ever have to use a firearm in self-defense you must know what your, obligations, rights and responsibilities are.  Most people would rush to call police and tell them what happened.   Particularly in Leftist LA-LA Land, a jail cell will house you as you wait a jury determination that may take as much as three years of your life.   You’ll probably be bankrupt and homeless by the time you are cleared by a jury and released.
Here are the rules that will save you from the jaws of Hell if you’re lucky enough to survive a shooting!

Excellent advice - I have one question please. I am a trained physician - 26 years of emergency medicine, 5 of them in a trauma center. If I shoot someone, would you recommend I provide aid? Luckily, I live in Florida - the first State to become "Shall Issue", with a very conservative population that doesn't have much sympathy for criminals.

First aid for a injured assailant? This may sound strange but I feel that if you're in absolute safety it's the proper thing to do. The problem is that I'm not sure there are ever going to be many opportunities for you to be safe enough to try this. Emergency medical technicians on the other hand usually have a strong police presence and can do this in safety.

Remember we have to live with ourselves for the rest of our lives. What we must do in the gravest extreme should take that into consideration. We are not executioners. We must never surrender our basic kindness and humanity.

I happen to be an Ayoob Shooting story survivor. He wrote about my shooting in the July 1991 Ayoob Files report in American Handgunner Magazine

We may disagree on when and who should call 911. Ayoob comes in from the police point of view. My view is as a criminal defense investigator that specializes in self-defense cases where civilians are wrongfully charged.

Ayoob is a great firearms instructor and will help you survive the shooting itself. He's also a sought after expert witness on the dynamics of self-defense.

Don't the laws on legal requirements of a CCW self defense shooting survivor vary from state to state? Does your advice based upon the protections provided by the Bill of Rights supercede state law? I guess I would be worried that state prosecutors would simply ignore the Bill of Rights and charge me for violating a law written into the state CCW revised code that requires one to inform police of the shooting. What about just shoot, scoot and zip your lips forever?

The Supreme Court has mandated self-incrimination law from the beginning for all 50 states and DC. The video applies everywhere.

Thanks for your response Mr. Huebl. I watched the video again, and I'm still wondering why have a lawyer or a neighbor call 911 at all, barring any shooting occurring on one's own property, of course. What would be the downside, if any, to shooting, scooting and remaining silent/anonymous forever? Thanks, and I really enjoy your blog. Keep writing and I'll keep reading!

Kevin you asked a good question! I don't think anyone wants to leave anyone to die without help. Additionally the fact that you left you'r attacker to die can and would be told to a jury.

That call should be made because you requested help. Better that is not by you. If you sound uncooperative or evasive on a 911 tape you're toast because they will play that tape for any jury. The perfect 911 call is where someone calls and says there is a man calling for help because a man is down and bleeding.

What do you do if you drew your legally-carried handgun in response to a clear threat, but did NOT need to fire a shot?

I've read that if you fail to call the cops with YOUR side of the story and the clown who threatened you DOES, and he gives them a song and dance that "he threatened me with a gun!" they'll show up, cart you off to jail, and you'll be offered a "plea to a low level felony or face trial and conviction for a list of felonies long enough to get you 10 years in prison."

Paul, given what you show us in your video, it sounds like you're "damned if you do, damned if you don't" ESPECIALLY if no shot is fired (and statistically, we are told that displaying a gun to prevent a crime occurs hundreds of thousands to millions of times a year).

Should you have to display or draw your weapon to terminate a crime what’s the protocol? What will happen?

With any luck the offender will simply run away. However sometimes the offenders will want to continue challenges, especially if they doubt your resolve to shoot. I’ve seen strong-armed robberies turned into simple disputes by cops. The robbers say they were only panhandling and you pulled and pointed your gun at them.

The best way to handle this is to make a citizen’s arrest but you better know the exact laws of arrest and the ones your prisoner/s violated. Complicated? You bet it is!

Most of the time the cops will discover the bad boys have a serious criminal record and hopefully the cops will accept your version of events.

At businesses well-placed, high definition security cameras can be your salvation. I prefer covert or hidden cameras with sound over obvious cameras. If you’re in a state that allows one-party consent to recording conversations, audio is very important. In states like California skip the audio or face a felony charge.

For an attempted crime where you have a prisoner you have no choice but to call 911. Don’t let the operator convince you to put your gun down unless you’re absolutely safe. Tell the operator to send the police. Put the phone down to avoid distraction, you don’t have to hang up. Don’t allow yourself to be grilled about minor details. Be firm saying, send the police! Once it’s safe to holster or put the gun in a drawer that would be a very good idea. You don’t want a gun in your hand as police arrive.

When the cops come you’ll hear outrageous lies roll off the tongue/s of the offender/s.

Let me remind you about conflict avoidance one more time! It’s mush better if the incident was avoided in the first place.

In most jurisdictions the use if a firearm where no shots are fired or injuries inflicted this should be resolved favorably. However in the states were they could make your display of a gun a felony you could have real trouble if they decide to arrest you.

Those fans of the concept of exposed carry don’t seem to understand that troublemakers will be more than happy to claim you pointed your gun at them. Since there is no question you had a gun that gives the accuser some leverage against you. If they did not know you had a gun that substantially reduces that kind of allegation.

If you wanted an easy answer there is none. The best-case scenario is that you know the law of your jurisdiction well and that you have clear video and audio of the entire event. It that’s the case, ask for a lawyer and let the lawyer use the video event to set you free.

I wish I had a better answer. By now you can better understand the value of conflict avoidance.