Why Aren’t These Trespassers Marching in Mexico City? 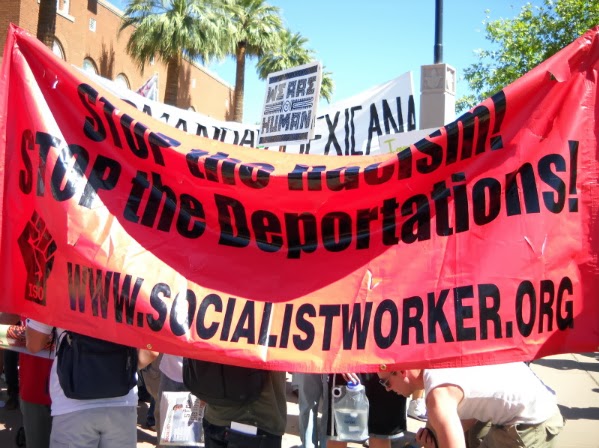 Phoenix, AZ—I had to visit a client in the Maricopa County Jail who is charged with two unrelated murders of women.  When I got to the jail it was in a full state of lockdown because of a demonstration by as many as 4,000 illegal aliens and their families.  I had to wait for this foolishness to pass before the jail would reopen.
There was strong labor union sponsorship of this group’s presence on the downtown streets of this city.  The group was peaceful as the passed by with their signs and chants.  There were some glaring observations that I made of this group that threaten the economic status of America.
Our entire healthcare system has all but shut down because some 11 uninsured million illegal aliens can and do walk into any emergency room and demand full medical care.  We cannot afford to provide medical, educational, service for our own citizens but our politicians have forced us to pay a massive debt of Mexico and Central American trespassers.
If you look closely at the women of child-bearing age and you will see that nearly all of them are pregnant and have two or three children in tow.  They are not paying their own medical care costs.  These 4,000 demonstrators are sucking up millions of our tax dollars and now our some of our politicians want to give them every kind of welfare entitlement.  That will simply insure that the USA becomes a Third World Nation.
Communism can only survive with a massive population of ignorant, poor and miserably needy people.  That’s how they keep power to enslave the productive citizens.
Mexico has every natural resource of the USA.  They have two beautiful coasts and should thrive as well or better than we have done.  That’s impossible because they have a corrupt government that generates crime, poverty and ignorance.  Of course they export as much as they can to our nation as their upper educated a nd privileged society contributes nothing to their own poor.
If we really cared about these Mexican economic refugees we’d keep them out but support them in efforts to overthrow their own despotic government. If they did that right they could recreate Mexico with a Constitution like our own.  Within a few decades they could achieve greatness as a nation.  Soon they’d have to put up walls to keep us Gringo’s out of Mexico.
Our illegal Mexican aliens have a problem.  Not only can’t they properly read and write English they are also illiterate in Spanish!  The Mexican government evades all responsibility for that human tragedy.
By the way the Maricopa County Jail has a huge population of illegal aliens for very frightening violent crimes. Murder, rape, robbery and narcotics trafficking is what the misguided generosity of our politicians has imported.  That is both wrong and un-American.
Watch the hordes pass by.  This was about one third of the group.

Imagine what would happen to U.S. citizens if they did the same thing in Mexico City. Why is it acceptable that foreigners come here illegally and demand that taxpayers foot the bill for their housing, medical and educational needs? Our government is complicit with these interlopers and all of the politicians who fail to secure our borders need to be voted out of office. Throw the bums out!