The Political Fallout of Comparing Politicians to Adolph Hitler 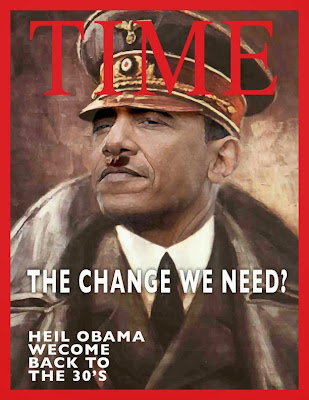 Los Angeles, CA—Adolph Hitler was evil personified. Hitler murdered six million Jews and over nine million Germans lost their lives because of that vile despot.
Jews in particular become offended when any of our politicians are compared to Hitler.  They take the position that Hitler was so evil he stands alone as an object of hate.  Suggesting anyone else may be trying to fill Hitler’s shoes marginalizes that dictator’s horrific accomplishments.
Let me say that Hitler was not just evil but more importantly he had great success in his world-class crime spree and genocide.  It’s not that others are not less evil; they just never had Hitler’s kind of success.
Josef Stalin was every bit as evil as Hitler and was also an enemy of Jews.  Josef Stalin killed as many or more people than Hitler, but since Stalin was victorious in defeating Hitler his henchmen authored the history books. There were a vast amount of Soviet war criminals that got a free ride after the war.
There are other lesser evil politicians than Hitler and Stalin.  They are not less evil only less successful.
Politicians by nature want to dominate entire populations.  As they obtain power and the spoils of office they become obsessed with wanting more power and wealth.  The more power they have the more they want.  They invent ways to tax people into slavery and eliminate freedom.  Any politician can become another Hitler.
After World war Two and the Holocaust the surviving Jews adopted the slogan, “Never Again!” The problem is that since the beginning of mankind we have had despots and Holocausts.  We don’t have video, film or pictures documenting those horrors because that technology did not exist.  We simply treat the older history is intangible legend.
The fact is with human beings we can count on many more Hitlers and Stalins.  That especially true if we allow our politicians to have absolute power. We are making the same mistakes with Obama as the Germans and Russians did with their despots. We are giving him and his henchmen more power than they could possibly need.
As humans we have a duty to rein in politicians when they extend their authority over liberty and freedom.  With Barack Obama we are making the same mistakes the Germans, Russians and Italians did before World war Two with their despots.
How soon we forget how Hitler promised the people of Germany everything.  Hitler was loved and even nominated for a Nobel Peace Prize.  He was Time Magazine’s Man of the Year!
Could we travel the same road with Obama or any American politician?  We’d be foolish to say that it could never happen.  It did in the past and will in the future.  What’s past is prologue.
It is anything but wrong to watch and compare every politician to past mass murderers that held public office.   It is our duty.  If we ignore our duty to watch and control our politicians we may wake up and find slavery, torture and genocide right in our faces.   We will have nobody to blame but ourselves.
Posted by Paul Huebl Crimefile News at 10/20/2013 05:48:00 PM

Paul I usually agree with you 100% but not today. Your remarks about Hitler were completely wrong. If you view him from a Marxist perspective he did absolutely nothing wrong and just followed the playbook. That – believe it or not was actually the defense many of his henchmen used at Nuremberg too. Marxism encourages the use of genocide as a tool of social engineering. Hitler was simply following Carl Marx’s advice and others have used that “tool” far more extensively then he ever did. Marxism cost the lives of 110 Million people in the last century. Hitler’s contribution to that was a just a drop in the bucket.

By pinning all the responsibility for Nazi genocide on Hitler we are obfuscating the true sconce of the evil – MARXISM.

Hitler was as red as they come (that’s why the Nazi flag was red) and corrupt leftist academics have been working tirelessly since the war to hide that fact from the world. Marxism strips the individual of all their humanity. It reduces humans to being nothing more then animals by denying the exercise of the elements that make us unique in all of creation. When you view humanity from that perspective then genocide is nothing then thinning a herd of it’s defective members – it is a proven technique to improve the quality of livestock.

I know what you’re thinking right now – men are not livestock and I agree. I believe that Marxism is a slap to the face of our Creator. My grand parents came from Germany and I quite certain that many of my relatives were Nazis too. I bet I lost a big hunk of family in World War II but I am glad they died. I thank General Eisenhower for what he did and how many he hung at Nuremberg because in my opinion no human being should live as an animal. What he did was an act of kindness. He freed them from their misery.

We could see so clearly then – what has happen?

I didn't mention a word suggesting that Hitler was not a Marxist. Hitler redistributed wealth in true marxist style.

He just ran sideways with the Bolsheviks. Communism is pure evil in any form.

E Lang, your suicidal wishes, to the point of thanking Eisenhower for killing them, are disgusting. Your dead relatives were not evil, they were your family, who simply fell on one particular side of a war that was engineered by "elite" manipulators. Their great "war crime" was the ultimate crime in any war: they lost. If your lost family members had survived, they and your unborn cousins would not be living like livestock today. Germany has recovered quite nicely.