The Official Crimefile Review of THE BOOK THIEF 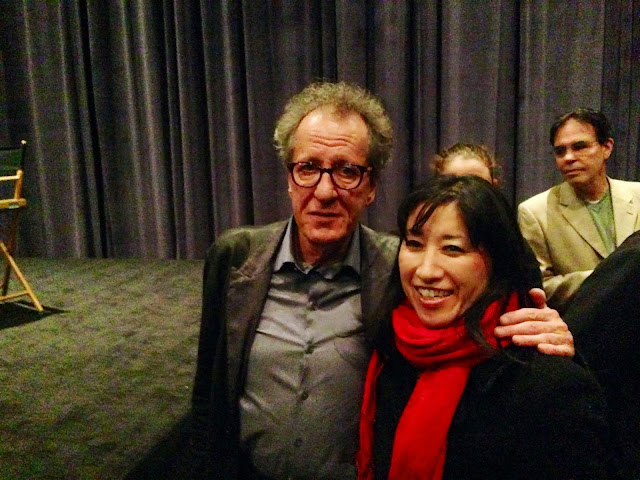 Los Angeles, CA—I made sure I was in town to catch this film screening at the Daryl Zanuck Theater on the Fox Film Studio Lot.  What a treat it was!
The Book Thief is a film adapted from the Markus Zusak book by the same name.  It’s a story about life in Germany during that dark period of 1933-1945.
It’s a joint offering from Fox 2000 Pictures, Studio Babelsberg of Berlin.
It’s about a young and illiterate girl, Liesel Meminger played by Sophie Nélisse.  Liesel gets taken by Nazi social services from her mother and sent to an older couple for adoption.  Liesel has to adapt to a new and somewhat frightening wartime life in different surroundings.
Geoffrey Rush and Emily Watson play her new parents who are struggling to make ends meet during wartime.  They seem mismatched but Rush's character cuts the ice as he turns on the charm.
The story surrounds Liesel’s thirst for literacy and a new sometimes larcenous love for books.  Books were very expensive back then and they were yesterday’s version today's laptop computer.
The police state was no picnic for German citizens who had a real and genuine fear of their government.  Liesel's new parents have a little intrigue of their own in their home
This film is both a real thriller and tear-jerker.  First time feature film director, Brian Percival, masterfully directed this film.  All of the actors are wonderful.
I don’t want to give too much information and spoil the film.  You will love it along with the  John Williams musical score.  The costumes and props were perfect.
It’s one of the best films I’ve ever seen. It’s a breakout vehicle for young Sophie Nélisse who is sure to win an Oscar Nomination for her terrific acting.
I was thrilled to meet and chat with Rush, Nélisse and Percival about this exciting film that will be in you local theaters in early November.

Email ThisBlogThis!Share to TwitterShare to FacebookShare to Pinterest
Labels: The BOOK thief

I like Rush. He was great in "The Kings Speech Too" and in "Shine"

He's wonderful in this too. Lots of mischief!