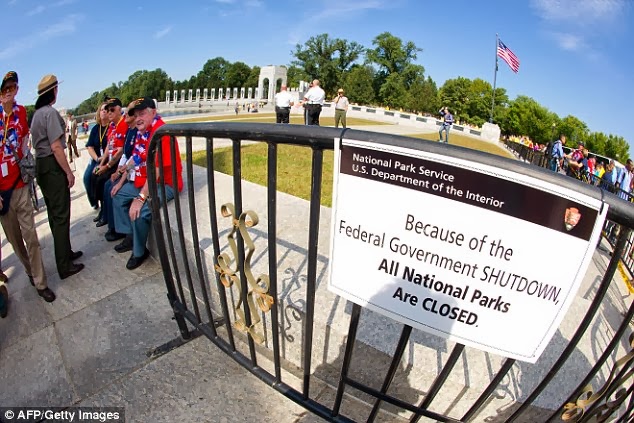 Washington, DC—Barack Obama has deeply divided this nation by class and race.  He has pitted a huge population of illegal aliens with ignorant and poor African-Americans against America’s productive taxpayers.
Obama has made war on our military veterans with a highly visible hate campaign. Obama has used the government shutdown to victimize veterans in a highly offensive and provocative manner.  This has turned out to be yet another one of Obama’s serious blunders.
Our nation's war memorials were built mostly with private funds.  They are located in the sprawling Capital Mall area.  The government does nothing with them but but clean a little refuse and cut the grass.  The grass did not stop growing nor did the winds cease to blow trash and leaves onto the area containing the monuments because of the shutdown.
In a shockingly provocative move the Whitehouse ordered barricades be brought in and ordered that police eject potential visiting veterans.  The cost for the blockades and security trolls substantially exceeds any routine maintenance expense by far.
Our veterans along with some members of Congress went in and moved the barricades and visited the monuments honoring the bravery of our precious veterans.  Many of these heroes won’t get a second chance to visit the monuments because of their advanced age and health.
In a second insult the Whitehouse opened the entire mall for a demonstration on behalf of the millions of Mexican trespassers demanding citizenship!  Of course unlike our respectful veterans the illegal aliens left behind loads of their trash for taxpayers to eat.
Obama knows that the majority of our veterans served this nation fighting Communists in the Korean and Viet Nam wars.  They were trained to kill Communists that were seeking to force their form of slavery on others.
The fact is that killing Communists was and still is a necessary and honorable mission.  The problem is that we have allowed Communists to occupy or Congress and Whitehouse.  We need to learn how to purge these bastards before they procreate any more.
Before Obama’s term expires everything points to his testing the waters of Martial Law by creating unnecessary conflicts.
What Obama does not realize is that there are many more veterans than he can imagine that want to see him and his henchmen dragged out of the Whitehouse and tried for Treason than he can ever imagine.
The veterans have the training and own the majority of firearms in America. They have already demonstrated their determination and bravery.  They have also passed those skills and values on to their sons and daughters.
The legions of ignorant welfare zombies and illegal aliens are no match for our veterans in any fight.  Today’s cops and military members will always side with their parents over any Obama loyalists.
Government cash drives our military contractors but there are a few veterans among them that have access to some serious weapons of mass destruction.  It would not require much effort for some contractor to take out the Whitehouse and it’s occupants.
Obama better learn how to be a good lame duck and not push his luck.  Biting our veterans is biting the hand that feeds him. Obama should lay low while he can and retire peacefully.  To do otherwise will make some serious drama this nation does not want or need.
Make no mistake millions of Americans are still more than willing to shed blood in the name of liberty and freedom.