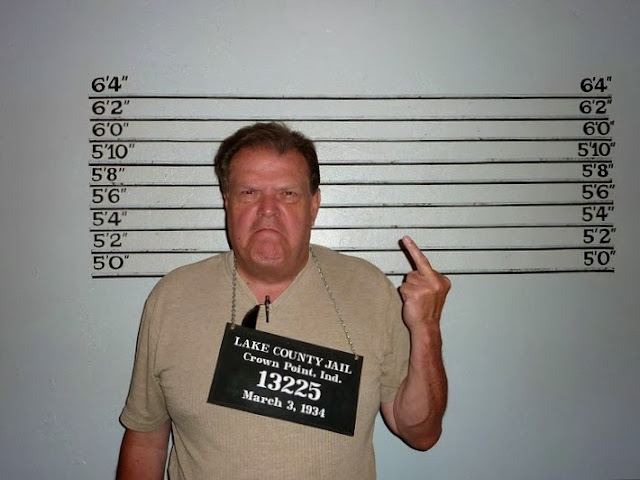 Crown Point, IN—Arrest information and police booking photos are public record nearly everywhere.  If you’re accused of a misdemeanor or felony, you’ll get fingerprinted, photographed and often humiliated.  If it’s a high profile crime or you have a even a small bit of celebrity you can count on being put up at a garish public display at a Photo-op Perpwalk too.
Cops and prosecutors love to brag about high profile cases and are allowed to release lurid details that are sure to become the topic of gossip everywhere.  This also interferes with the right of the accused to a fair trial.   Arrests are often newsworthy but the same is rarely true for vindication or an acquittal.
The presumption of innocence goes out the window once the media finds an arrest to be newsworthy.  The rules regarding release of documents and information especially in the Information Age need serious revision.  High profile criminal trials have replaced gladiators and feeding people to lions as a form of entertainment.
Today the arrests that are not newsworthy, infamous or otherwise remarkable are just a click away on any search engine.  Routine traffic arrests for excessive speed, driving on a suspended license or DUI are now posted on the Internet for the personal gain of website owners.
Should you be accused of any crime usually there are very unflattering booking photos, fingerprints and probable cause information justifying the arrest are public record.
Some website owners are demanding and getting the material and gratuitously posting it in the Internet long before there is a conviction related to the arrest.  If there is an acquittal the damaging material is left out there to keep you from getting, jobs, loans or a chance at a relationship with a cautious but desirable potential lover.
Whether you’re convicted or not the website owners offer to remove the damaging material for cash.  In some cases they operated three and for different websites sharing the same information.  Sanitizing the Internet of you booking information and photos could take a lot of money.  Frankly this scam borders on extortion.
For those convicted of crimes I’m not really concerned that the guilty carry the Mark of Cain.  For the innocents I believe that there should be an effective legal remedy.  Thousands of people are arrested every year because they share similar names or physical characteristics with criminals. They are usually released after the mix-up is resolved through additional police investigation.
The fix here is simple, to bar the release of the photos or information to the public unless or until there has been Due Process and a conviction.  This could be accomplished by a single federal law or at the state level.
Web site operators should simply face criminal charges and their sites seized by authorities for displaying material of anyone not convicted of the crime for which they were charged.
The booking photo above was a prank.  This was taken at the old Lake County, Indiana Jail Museum.  The slate was re-created for the Michael Mann film Public Enemies.  Check the date and it reflects the arrest of John Dillinger well before I was born.   Johnny Depp wore that infamous slate for the film.

Damn Paul, you were arrested in 1934 and you haven't changed a bit. Must be good living. ;D