The Crimefile News review of The Fifth Estate 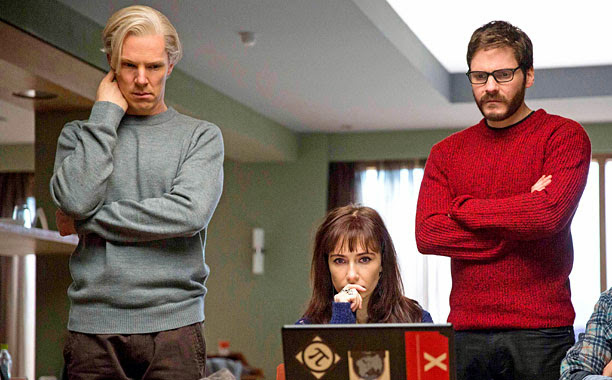 Berlin, Germany—The Wikileaks massive document dumps exposing mass government deception and corruption inspired this film.
Apparently fugitive blogger/hacker Julian Assange somehow got ahold of the script and completely hated what he’d read in this Dreamworks project.
Hundred of thousands of cablegrams were intercepted and forwarded to the Wikileaks organization.  The material was censored before it was published by various news organizations.  Wikileaks went ahead and posted the raw material on line for the entire world to examine.
The biggest issue was the material provided by Army private Bradley Manning.  Was manning a spy or a whistleblower?  I think the answer lies in the corruption and deception by our own government.  Manning is doing some serious time over his role.  Frankly I’m on his side of this argument.  Americans have a right to know when their elected officials are engaging in deception to us.
The scriptwriters took liberties with the story and I’m ignorant of the details that were twisted by these scribes.   The mainstream media engaged in their usual methods to protect their politicians.  The established media no longer controls the message because thousands of bloggers like me have pushed them aside in recent years.
As for the film production it was terrific.  I loved the material shot on location in Germany, Belgium, Netherlands and Switzerland.  I’m so very fond of those European nations.   There is a really terrific night scene shot from the roof of Berlin’s Dome Church that I visited in 2011.  I actually found an iPhone someone left on a pew that I quickly turned it in for a happy owner.
The acting by Benedict Cumberbatch (Assange) was terrific as his former “crime partner” Daniel Bruhl (Daniel Berg) was great.  I’m a huge fan of Laura Linney (Sarah Shaw) who delivered in her State Department role along with veteran actor Stanley Tucci  (James Boswell).

I’m a total fan of the talented Carice van Houten (Birgitta Jónsdóttir).  Van Houten portrayed a member of Iceland’s Parliament and the publicist for Assanage.  I must confess that I found that the Jónsdóttir roll did not offer van Houten a chance to display her terrific gifts of emotional interpretation.  Nonetheless I did enjoy watching her bring the pages of her script to life.
If you like Europe’s terrific eye-candy and culture this film is for you.  The only problems that I see is that the ignorant movie going masses are totally apathetic to government corruption and deception. That is the kind of ignorance that allows for fascism and tyranny.  Apparently most Americans would rather worry about the interracial relationships of the Kardashian bimbos.
I liked the film and will add the Blu-Ray DVD to my collection.  The photography and special effects were somewhat groundbreaking.
On a side note I want very much to see Carice van Houten in the kind of roles that better test her abilities. I want to see this lovely Dutch lass walk the Red-Oscar Carpet.   As an SAG-AFTRA actor myself, I’d be thrilled to play a scene or two with Van Houten.  Someone needs to cast me as her father or perhaps boss.
I have a script with a starring role for van Houten and I’d love to play her character’s lawyer.  I guess I will have to keep on dreaming.

Thanks for the film review

and be sure to keep on dreaming and keep on loving - Paul!