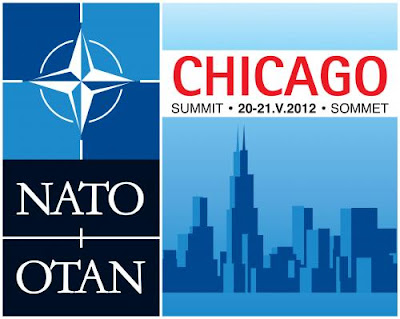 Chicago, IL—Officials at every level of government are cooperating in an exercise of unprecedented restraint of civil liberties in connection with the upcoming NATO meeting.
They’re shutting down miles of expressways, streets and alleys but for government travel.  The skies will be a no fly zone where anyone found in the air space will be shot out of the sky.  Private property anywhere near the meeting will be overrun with Secret Service, Homeland Security and the dreaded TSA Bozos.
Chicagoans will lose millions in business disruptions.   Government obstruction of commerce and normal movement of people commuting to and from their homes is right out of our worst nightmare.
People will be searched, groped and ordered around by heavily armed men in jackboots and bucket helmets.  They are counting on Chicago cops to obediently follow any and all commands from the Whitehouse.
If this was not bad enough they are openly making plans to incarcerate thousands into closed and condemned Illinois prison facilities.  They have also set up a master plan to forcibly evacuate city residents to camps in other states.
I don’t see this as a necessary security plan but rather a dry run for Martial Law.  They want to see just how far they can push Americans around before they will resist tyranny.
Sadly we already know full well by Europe’s Holocaust that people will respond like frightened sheep and fully cooperate with their own mass extermination.
Folks, this is only a blueprint for things to come.  We are about to enter some really dark days ahead.

Dark days are to come indeed. They will be here before we know it. Most people however are clueless and think it's all a joke when I try to wake them up. Martial Law is all set and ready to be launched. All they need is another false flag terrorist attack so they have an excuse to implement it. If you want to see what they've been training for, and what's beeing planned for decades I highly recommend these films. Don't let the titles fool you - these are NOT anti-police films. They may be shocking for some viewers.


Into The Fire This is a great documentary from the G20 in Toronto in 2010. It's hard to believe how much money and lawlessness goes into protecting a small number of pricks running this planet. Stay safe everyone.

obama turning our own military and police against us ? This IS scarey, for REAL.

eBut the Nice Lady Spokesperson from NATO said all would be OK?

Would they LIE to us?

Paul I have to take exception to your comment:

“Sadly we already know full well by Europe’s Holocaust that people will respond like frightened sheep and fully cooperate with their own mass extermination.”

That was true it Europe and especially in Germany because Europeans do not have a cultural history of freedom. People there even today are conditioned to accept bullying from their government. They expect it and think that is one of the government’s job. Most people who came to live here in the Untied States are those who wouldn’t accept the abuse. My grand patents sailed in the filthy hold of merchant ship in conditions not fit for aminals. I lost a great aunt during the passage and they arrived pennyless in a foreign land where they couldn’t even speak the language. They did all that willingly because they refused to live on their knees.

Dispite all the efforts of the Marxists our country is the most unique and wonderous place in the world. We are the people of the world who will not be slaves and like my fathers before me I will not bow to any man.

Yes I agree the Marxists like our President are ushering us towards a police state but I don’t agree all Americans will accept it like sheep. We have plenty of people who trade their dignity and freedom for monthly government checks but the majority of us would rather be productive and build lives to be proud of. They are making a big mistake thinking they can shackle us with chains. Right now there isn’t much physical resistance because unlike the founding fathers we can vote and have the ultimate power of the voting booth. The Democrats are working day and night to corrupt that power with fraud schemes and if they’re successful they’ll drive us to open revolt.

It is easy to mistake the cooperation of the proud productive people of our country as sheepishness. It isn’t, while we have the to power to vote there is no need for violence. We’re not backed into a corner yet.

You make an intelligent argument but I remain convinced we are beyond the state of correcting this with ballots rather than bullets. We are over run with the majority of our population on their knees waiting for redistributed wealth. Our Congress is loaded with Communists and criminals. Our vote is destroyed by a fraudulent that invites non-citizens, felons and even the dead to vote. We are in a police state. We must begin to resist.

Our constitutional rights are gradually being taken away. Slowly at first, but ever increasing. It started with the Patriot Act. It continued with NDAA and indefinite detention - even of person's who are acquitted of their crimes. Under NDAA "terrorist sympathizers" are allowed to be indefinitely detained and tortured by our military in these FEMA camps. But what is a terrorist sympathizer? The term is very loosely defined and can include anyone who openly speaks out against the government. Obama also recently passed legislature that you can be charged with a felony for exercising your 1st amendment right to peacefully gather (protest). Now, the 6th amendment is gone, and the 1st amendment is almost gone. I found an article the other day that explains NDAA pretty well: http://www.martiallawusa.com/wp/?p=26


Your blog will be sensational during May with all the live coverage.