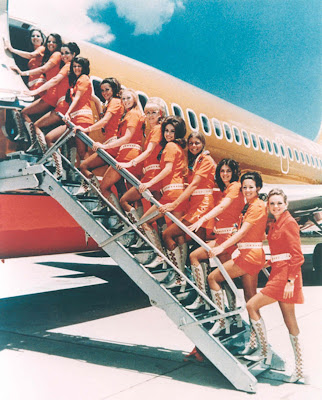 Phoenix, AZ—First let me say that Gays and Grannies need love too. Those that must work also deserve comparable wages as everyone in similar skill levels. They all have worth and rate fair treatment along with genuine respect. Here someone dared suggest that Gay men and older women may be better received in occupations other than that of flight attendants.

Yes a Southwest Airlines pilot got caught on an open air traffic microphone ranting about the “New Breed” of flight attendants working for the airline. He made some unflattering remarks about the Gays and Grannies that have taken over the domain once reserved for young and friendly pretty ladies.

First of all the ousting of the Southwest Airlines eye candy is disheartening for any straight male. The law, corporate attitudes and political correctness have changed in America. Is this for the better? I don’t think so.

We are today a nation or crybabies that can’t accept anyone criticizing their culture, lifestyle, sexual preference, height, and weight or shoe size. Everyone on this earth has something considered undesirable to others and has to live with that liability. That includes ageing White, male pilots.

For anyone to be alarmed about this private conversation between pilots not intended to be heard by anyone is disturbing at least to me.

As for what the pilot misses can anyone really argue that these Southwest ladies weren’t spectacular and enjoyable to have serve them in the days when flying was fun?

I’d love to go back to those days before political correctness went wacky and people were never frisked like criminals before they could board an aircraft.

As for the pilot he simply privately called it the way he saw it. As in that great Jack Nicholson film line, “You can’t handle the truth!”
Posted by Paul Huebl Crimefile News at 6/23/2011 10:52:00 AM

The comments would have been private if for not the stupidity of this individual keying the microphone. This shows a lack of professionalism and a lack of common sense. If the intent were to keep the conversation private, don't have it in an environment that is recorded at all times by cockpit voice recorders. Poor judgement and no taste by these crew members.

Uncalled for, even though the Pilot was probably right in his opinions..

what real difference do the comments make, anyway?....unfortunate that they were broadcast, but, since when do we legislate what is in a person's mind or heart?

(provided by a faulty microphone switch)

He is totally right in his opinion!W

As a straight female, I also miss the days when stewardesses were pretty and friendly. In fact, there are a lot of things that I miss such as freedom of speech, and public decency.

The only issue here was the Pilot hit the Hot Mic rather that the Inter-phone. Move along "girls".