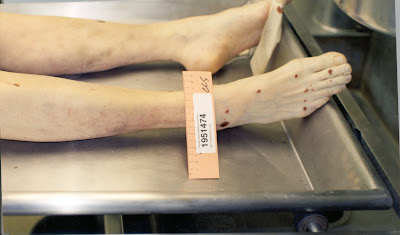 Yuma, AZ—Today six people connected to a nasty divorce are dead. Apparently a divorce that was adjudicated two years ago did not sit well with one man and he methodically killed those who made his life Hell. I have not and won’t investigate the event other than to say someone was really pissed off. Was he justified to kill everyone? In this case is there was only one opinion that counted, that of the man exacting revenge.

There are the mentally disturbed people that are set off by little transgressions. They over-react and sometimes commit mayhem. There are those that feel justified in violently assaulting or killing others for annoyance or envy.

As a private investigator I have been inside the worst divorces, swindles and abuse of citizens by government officials. I have seen more than one life destroyed by wrongful prosecutions and convictions. I’ve found it to be a monument to our civilization that there aren’t more killings of some really deserving people.

I have tracked many murder victims over the last four decades and found that most of them were rotten people that stepped on the backs of others. We always hear about the stranger on stranger crimes where the victims are truly innocent. But the truth is most people placed under the Medical Examiner’s knife contributed to their fate.

Prosecutor like Mike Nifong of the Duke La Crosse players rape case, put innocent young men and their families through utter Hell and financial devastation. Nifong was a deserving candidate for a violent end because of his vicious persecution. In that case Nifong took a fall because he got caught breaking the law. There are many more Nifongs out there that get away with ruining the lives of innocent people.

People, particularly rogue public officials ruthlessly victimize people every day simply because they can. They feel invincible and protected as they do their evil deeds. The reality is that power corrupts and absolute power corrupts absolutely. Corrupt officials endanger the lives of their fellow officials who treat citizens fairly.

The truth is that when good people are victimized the powerful they simply try and make the best of what they’re dealt. That emboldens tyrants to step up their aggression on their fellow human beings. Sometimes these miscreants get what they deserve, but never often enough.

Perhaps civilization has been too protective of tyrants and those who enjoy inflicting misery on their fellow human beings. I have a motto I live by, “If justice happens it’s usually by accident and for all the wrong reasons.”
Posted by Paul Huebl Crimefile News at 6/02/2011 10:10:00 PM

Sometimes is doesnt pay to be an asshole.

What goes around comes around. A person's actions, whether good or bad, will often have consequences for that person.

Expediency is the use of or inclination towards methods that are advantageous rather than fair or just. Despicable Tyrants can breed here.

Victims of crime or defendant perpetrators who have been mistreated by bait and switch justice are often used by Politicians, Courts, judges district attorneys Governor, police for political expediency- a desire for power and promotion - and not for JUST purposes. JUSTICE GETS LOST IN THIS EQUATION.

Because if the perpetrator's name can be severely tarnished when it is NOT deserved, or if Government crime can be covered up
those officials who manage to accomplish this
stand to be rewarded handsomely by promotions and by being given fancy titles, when corruption is the name of the game.

Thus a Santa Monica Judge can stage a hearing to coverup police cover up of sexual assault complaint and allow a beating of the victim in the courtroom so the County Judge can get himself promoted to the California Appeal court and be called a Justice - at the expense of justice for the sexual assault victim who instead is beaten up and later called a vexatious litigant by a Federal Court Judge who eventually recuses himself from the case.

Was Maria Shriver also a victim of political expediency used and abused for her political connections?

It does not matter whether you are rich or poor you can be victimized by political expediency.

Crime file said "People, particularly rogue public officials ruthlessly victimize people every day simply because they can. They feel invincible and protected as they do their evil deeds. The reality is that power corrupts and absolute power corrupts absolutely. Corrupt officials endanger the lives of their fellow officials who treat citizens fairly.

The truth is that when good people are victimized by the powerful they simply try and make the best of what they’re dealt. Sometimes these miscreants get what they deserve, but never often enough."

I wanted to add that ambition for promotion in Government (or anywhere else) is not a bad thing in and of itself. It is how one goes about achieving the goal to be at the top of the pile.

If a person is so determined to achieve their ambitions/END that they will use falsehood, any self-serving means to do so –nor any conscience that they are sacrificing, mutilating and harming innocent others to achieve their own sordid ambitious goals –

this is when political expediency occurs through the predators use of illegal power, against the less powerful.

Some humans are predators, many hop on the backs of the disadvantaged or the connected to rise and be promoted in Government whether as Justices, Federal Judges or Governors and many predators are seated in Government for life where they use their power illegally against those less powerful for more & more political expediency. And thus a vicious cycle is inherent in the system of corruption. It feeds on its own corruption.

Predator :
1. An organism that lives by preying on other organisms.
2. One that victimizes, plunders, or destroys, especially for one's own gain.