Gallows Humor at the Gallows, a True Story 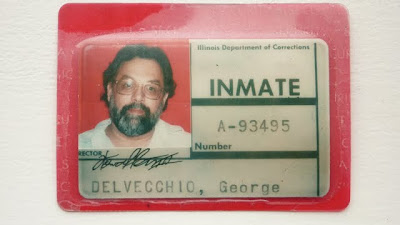 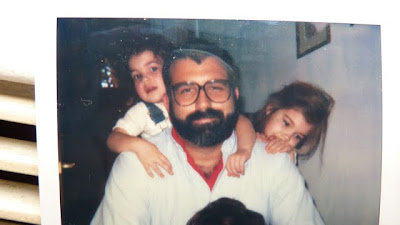 Menard, IL--This is where a truly horrible man was executed on 22 November 1995. I'm no fan of the death penalty but I remember well a monstrous murder committed by three North side, Chicago lads my own age in December of 1965.

66 year-old, Fred Christensen went for a stroll on Waveland Avenue when he encountered three boys including a then,16 year old George Delvecchio armed with a .22 caliber semi-automatic rifle. The trio robbed and shot Christensen eleven times because he only had $11.00 to surrender.

This news story was big and the confessed killers said they were high on speed pills that were called "goofballs" back then.

This crime and its punishment was settled in a plea agreement for Delvecchio that committed him to a juvenile institution until he was 21. He was later transferred to an adult prison but was released after only serving eight years total. They said he had be reformed.

In December of 1977 Delvecchio met Karen Canzoneri and was briefly a guest in her home. Delvecchio left only to return later, uninvited as he forced his way into her home raping her after slashing the throat of her six year-old son Tony, killing the boy.

Delvecchio was profiled again in the news for yet another sensational murder. He went through the criminal justice system that was not so kind to him this time. Delvecchio was sentenced to a well-deserved death penalty for this unspeakable act.

In the 22 year fight to spare Delvecchio's life, was a young lawyer, who came to know the killer. Jed Stone. Stone said this fellow was now a different person and was worth receiving clemency. However, the appeals ran out and on 22 November 1995 George Delvecchio was set to take his last walk to the death chamber from his deathwatch cell.

Present was the warden, chaplain, guards and Jed Stone. Delvecchio was resigned to his grim fate and had given away his meager possession to other inmates like a radio he owned. He apologized to Stone he had nothing left to give him. Delvecchio discovered he had something after all, his inmate ID card! He offered it to Stone who thanked him for it as he placed it into his shirt pocket.

Soon Delveccho hugged the sad lawyer and the two began the walk to their respective places. Delvecchio headed to the lethal injection chamber and Stone to the witness room. Suddenly Delvecchio stopped and exclaimed, "there's a terrible mistake!" He said he was not in fact, Delvecchio and pointed to the astonished lawyer saying, "He's George Delvecchio and he has the ID card in his pocket to prove it!"

Amazingly Stone and his condemned client were very similar in age and appearance as the two photos above demonstrate. The ruse was accepted for what it was and Delvecchio was strapped down and killed. As always the executioner used a alcohol swab to clean the injection site to make sure the condemned man would not get an infection later.

I just had the great pleasure of working with Stone on a Chicago trial. Stone has distinguished himself in a great legal career that included the release of several notorious wrongfully convicted and condemned men such as Rolando Cruz in DuPage County.

This and other great stories are now in my briefcase and on their way to Hollywood.
Posted by Paul Huebl Crimefile News at 4/23/2011 02:45:00 AM

I don't see anything cute or humorous in anything George Delvecchio has ever done. My brother was one of the arresting officers in that case and vividly remembers the nearly decapitated body of that poor child.

I hope George is burning in hell as I type.

George was once considered for states attorney in cook county. He was rejected because he prefered to stab people in their front instead of in their backs!!!

There is no humor in the death of an innocent 6 year old boy. Seeing as how he could still try to deny the fact that he was a cold blooded heartless child murderer even upon his walk to the death chamber, tells me he still didn't care about anyone but himself. To say he was sorry and regretted what he did and if he could bring Tony back he would, is a total fabrication after trying to get out of his own punishment. Delvecchio got off lightly compared to what he did to Tony. Too bad we aren't "allowed" to follow the bibles teachings any more, an eye for an eye.. Somehow I feel Delvecchio escaped responsibility yet again.

Delvecucho's crimes were nothing short of horrifying, brutal and atrocious. I can't imagine the viciousness of killing an innocent child infront of his mother.

Stone told me that years later his client was not the same man. If there was ever a case that deserved the death penalty this was it. I understand in the end he had remors e for his actions. That was too little and too late.

I grew up on the west side of Chicago,Chicago Avenue to be exact.So did Delvecchio.
I went to Orr High School.So did Delvecchio.
I knew him before he committed his first murder and I knew him again after he got out of prison.
My biggest mistake was to believe him when he said he was,and acted like,a changed man.
It was a mistake so huge,it cost my son his life.
George Delvecchio murdered my son.
There are some truths here and some untruths.There is some factual reporting here and some downright lies.There is also some pretty significant omissions.
None of that really matter,not 38 years after the fact.
What matters is this-Everybody seems to remember his name-it is mentioned many times.
Far fewer mention my son's name and THAT bothers me.
His name is Tony,Tony Canzoneri and he was named after a world class boxer who was my cousin
Tomorrow is the 38th anniversary of Tony's murder.
Please, REMEMBER TONY

Little Tony was innocent and his vicious murder are unthinkable and unimaginable. Tony deserves to be remembered for bring joy to his mother and his little peers. I will never forget the depraved cruelly that came with this story... Tony Canzoneri is in Heaven.