We Have Lost Another Hero 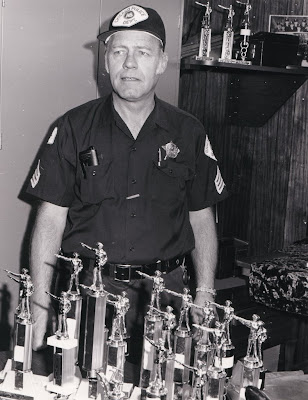 I’m very sad to report that retired Chicago Police Sergeant and Rangemaster Roy “Swanny” Swanson has passed away at 85 years of age.

Swanny was a Chicago Park District patrolman before that agency merged with the Chicago Police Department. One night while on patrol Swanny had a terrible accident when he ran over a vagrant sleeping in the park. There was an inquiry and Swanny who had superior shooting skills was temporarily assigned to non-driving duties.

So it was by accident Swamny was sent to the firing range where the department soon learned that Swanny had a gift for teaching firearm skills to both recruits and veteran cops alike. For the rest of his career with the Chicago Police Department Swanny was exposed to the foul target range air and lead poisoning as he saved lives of cops and the civilians they protect.

The thousands of officers he trained and helped bring home safe every night will remember Rangemaster Roy Swanson. Swanny will also be remembered for his gruff voice and Rangemaster’s demeanor when the truth was that this fellow was as gentle as a teddy bear.

I wrote the screenplay, Come Friday about the heroic policewoman, Ann Leybourne. Swanny holds a prominent place in that compelling story. It was Swanny who got this great lady to overcome her fear and dislike for firearms enough to survive a deadly encounter with an armed serial rapist and successfully complete her training. That film is still under development.

Long ago when I was attacked one night by a drunken man with a .45 Colt Gold Cup my response to the threat was bolstered as I could plainly hear Swanny’s instructions. Swanny was guiding me as I engaged my would be killer and critically wounded him. Swanny will always have a special place in my heart.

Rest in peace Swanny, you did make a difference.

From The Chicago tribune:

Paul, Tx 4 that wonderful, true tribute to Roy. I am disappointed to tell you that his notice did not make the Daily Bulletin. However, I will be attending the wake and services to be conducted 2nite by his American Legion comrades. I am printing your piece to show them and I will let you know how it goes. Roy was the rangemaster when I was in the academy (and I know he helped me alot), he retired after my class, however. When I would run into him at the post, he would tease me that I convinced him it was time to go. A great man and a TRUE AMERICAN!

May he rest in peace

The CPD could use alot more gentlemen like this nowadays. RIP Brother

I REMEMBER SGT SWANSON WELL AND LIKE YOU PAUL, I THANK HIM FOR TEACHING ME HOW TO SHOOT. HE WAS A FIRST CLASS GENT! HE ALSO HAD A KEEN SENSE OF HUMOR.. MAY HE REST IN PEACE.
SGT. ANDY MURCIA, (RET)