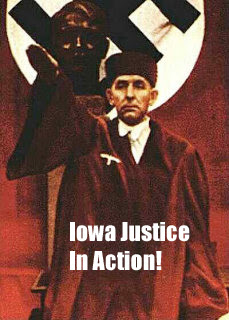 I have always hated injustice and have railed that reasonable doubt must rule in every criminal case.

I’ve been abused by my own friends for accepting the O.J. Simpson verdict and often demanding that we error on the side of letting the guilty go free rather than convict the innocent. Our criminal justice system must be fair or we will have a police state rather than a free country in which to live and raise our families. Remember Adolph Hitler had his own judges too.

People become instant converts to my way of thinking when the unthinkable happens, and they get accused of a crime when they’ve done nothing wrong.

On October 8th 2005, Chicago police officer Michael Mette of the Fillmore District was attacked by a Dubuque college student, 20-year-old Jake Gothard while attending a birthday celebration at his brother’s home. Before it was over this week, officer Mette was arrested, prosecuted, convicted and now faces a mandatory five-year Iowa prison term.

Iowa justice is beyond strange because at a Dubuque County Court bench trial the judge, Judge Monica Ackley found that Chicago Police Officer Mette "was not the initial aggressor of this incident," Jake Gothard was. Astonishingly, Judge Ackley ruled that Mette was guilty, because even after Gothard struck him three times, Mette should have just ignored it and retreated.

Officer Mette's infamous felony crime was to punch the 6 foot, 2 inch tall Gothard once in self-defense knocking him out.

I don’t care how much anyone screams or demonstrates it will take years to right this wrong and it will bankrupt Mette in the process.

As for our young intoxicated thug, he has a Facebook page filled with a photo celebration to his own alcoholism. A year later (on September 8, 2006) and after his assault on officer mette, Jake Lee Gothard was arrested and later convicted of a liquor violation and had his license revoked. He was again arrested and convicted, this time for driving under the influence. His plans now are to sue officer Mette in yet another Iowa courtroom.

In the United Kingdom there is no right to use any force to defend one’s life or virtue. In America with the help of the National Rifle Association there has been a state-by-state effort to beef up the self-defense laws so that thugs like Jake Gothard assault or otherwise victimize people at their own peril. Iowa and the U.K. have it wrong. Our creator gave us the gifts of fear and the fight or flight instinct so we may simply survive.

This should also cause anyone who is accused of or uses any force in self-defense to not cooperate in anyway with police without having a lawyer present. Giving police more than your name may bring you many years in prison. You may find your own words read back to you in a courtroom. But you will find those words to have been rewritten to something entirely different and considerably more incriminating.

Please remind me to stay far away from Iowa and to never use or buy products made there.

Note: The minute entry made by the judge reflects that date of the incident being October 8, 2006 but the actual date was exactly one year earlier. The court docket and judge's order are in conflict.

I’m sure we’ve not heard the last of this nightmare.

Glad you posted this mess. Something is really, really wrong in Dubuque. I take issue with the whole criminal justice system that participated in this case, but especially the patrol officers who determined that Officer Mette should be arrested in the first place. This is something that a rookie should be able to figure out. You arrest the aggressor, not the victim who is only trying to defend himself. If the offender picks on the wrong victim and gets his butt kicked in the process, then tough. Maybe he'll think twice next time before attacking someone else. I can only hope that Officer Mette wins on appeal. My guess is that the aggressor was politically juiced somewhere and made a couple of phone calls. If CPD puts together some type of benefit fund for Officer Mette, I will definitely contribute. And like you, I plan on staying the hell out of Iowa!

I (a former Iowa cop) want to reserve full comment until I read the judge's decision, something that WLS-TV should have posted on its web site so that we can make our own determination.

704.3 Defense of self or another.
A person is justified in the use of reasonable force when the person reasonably believes that such force is necessary to defend oneself or another from any imminent use of unlawful force.

We need to make this injustice world-wide news.

Concerned members of the Chicago police family need to go by the busloads straight to Iowa's governor and ask him to right this wrong before Mette is further victimized and bankrupted.

We can't wait for the FOP or anyone on this one.

I think we should ask the FOP to pay Mette's salary from our dues until further notice.

Hey RAG , What's your f*****' point ? Everyone knows that you can defend yourself.but I guess in the state of Iowa , you can't. If all of the police are like you then I can understand why Officer Mette got RAILROADED. If you want to see the judges briefs just look under her robe . She like you doesn't have a clue. There is NO doubt in my mind that this case stinks of some type of favors owed to someone for something. And you Mr. Rag you need to go home and get your shine box you are a double f*****' MORON !!!
Sorry Paul I had to vent.

Thanks for all the support. To Mr. Rag I have already sent a copy of the Judge's ruling to secondcity. Hopefully it will be posted by tonight. Thanks again to everyone who has spoken up and given their support.

Paul , Thanks for changing the "F" word for me. I just had to vent on this double F'n Moron. He pissed me off. God Bless this Officer . He sure needs it.

I think we need to do a major investigation on the entire Gothard family, the judge, the prosecutor and the involved cops. Something's just not right here.

Hey MM, please send me that .pdf file too at housedick@gmail.com.

Offenders father owns a major trucking company in Iowa. I am sure the Judges phone was ringing off the hook. Offender was later arrest for DUI. See what happens in this case. I bet Gothard will say he was forced to drink the licquor.

i dont see how he can loose on appeal?judges own words was that the other guy was the aggressor ?i think mette needs to get reversed on appeal and then him and fop,cpd,fellow blue,etc go full force hit the cops,prosecutors,judges with civilsuits in federal court.you cant just charge someone without cause and i dont see how anyone in this cause had cause to bring charges?judge even agreed in a way.cops,judges and prosecutors are not immune to lawsuits.

Which trucking company does this low-life's family own?

You must be kidding me, a Police Officer used force to defend himself and the judge convicts him because she "felt" he should have retreated. Give me a freaking break, this must be a joke or the judge is a dumbass.

Iowa is messed up. My best friend attended Iowa state from 93-98. They had this party every year called VIESHA. Well a friend of his friend came to vist on of them when i was out there. This friend was a member of a three letter federal law enforcement agency. As we walked from one party to another Ames city police drove up rushed out of their cars and anyone who had a cup in ther hands had the cup taken forcefully. When they did it to my friends friend he started to say what are you doing and 4 officers grabbed him. The sad thing was he had water in the cup as he was leaving the next day very early for work. They forced him to the ground and got really excited when they found his weapon (only after they had him cuffed for about 10 min........
Then they decided to look in his wallet for his id. WHOOPS.......
Sgt shows up goes YOU DUMBASSES and proceeds to apologize greatly to the agent who requested a pbt....... .00 was the result.
Fortunatley for the Ames pd he did not believe in lawsuits.......................

Paul , can you use your expertise in finding out the name & location of the father's trucking co. Im sure that everyone would like to know.

This is amazing! I as a young man was taught by my father, that if someone strikes you first, to protect yourself from receiving a beating. This would consist of punching back and blocking punches from the other guy! I have taught my 13 year old this also! I think every male reader out there has probably taught their sons the same thing! I wonder if Judge Ackley is married and if so what advice her husband, would give there son! I bet it would not be " stand there and take a beating from someone bigger than you" But after reading her stupid ruling and reasoning, I don't think that I would rule it out!

Maybe you could do a video showing the side of Ofc Mette and promoting his story on YouTube. Your other video showing CPD in a positive light was great.

Thanks for supporting our brother in blue.

Paul,
Mike Mette to be interviewed by Anderson Cooper tonight on CNN