NBC Datline’s, "To Catch a Predator" IS A TV Ratings Sleaze Milestone 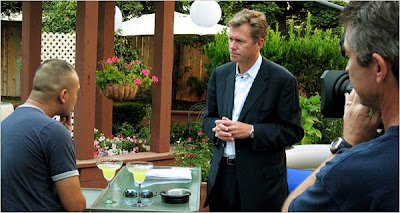 Few people in the world like pedophiles. These perverted folks steal the innocence of children whenever and wherever they can. Crimes against children are serious and those offenders need to be identified and prosecuted.

NBC has brought their own agenda to the table and that is bringing in the cash to keep failing TV news afloat and investor’s pockets full. The Internet based pedophile sting was discovered by TV as a cheap way to attract the voyeuristic viewers that like watching incredibly stupid men destroy themselves and their families. Dateline Correspondent Chris Hansen expertly draws the hapless fools into the most embarrassing and incriminating conversations they will ever have in their twisted lives.

Of course the stings are contrived and no children are involved, but for an illusion in the minds of those men finding themselves curious about or attracted to sex with kids. Dateline uses adults surfing sexually charged chatrooms pretending to be young teenagers who lure these men. The imposters quickly consent in wtiting to meeting and have sex with their targets. Entrapment is an ugly part of this sex-sting business that can’t be ignored.

Dateline has even surpassed Jerry Springer by dragging this sickening franchise far beyond the saturation point of sane and sober TV viewers. I guess some of us have a need to feel superior to others and enjoy watching these warped men suffer. It’s time for Dateline move on to something newsworthy or to stop pretending this never ending garbage is somehow news.
Posted by Paul Huebl Crimefile News at 7/21/2007 08:17:00 PM

I get a kick outta these so called coppers that just gotta take the scum down to the ground no matter how sissified the bad guy looks. Guns in hand, down you go mister. What an embarrassment.

Even worse when its a 65 year old nurse they are slamming around for speeding.