Prosecutor Alan Jackson Is A Jackass 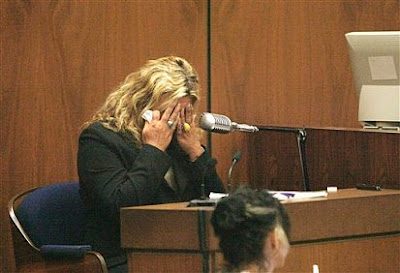 Laughlin was called to testify as a defense witness to shed light on Clarkson’s state of mind before her death. Clarkson confided her hopes, dreams and failures, for years along with suicidal thoughts to Laughlin during the period just before her life ended.

Laughlin has a heavy burden to deal with, and that's the guilt of perhaps not having done enough to see that Clarkson got help from mental health professionals and instead tried to cheer up her profoundly depressed friend herself. That obviously did not work and Clarkson died.

Laughlin’s testimony also revealed that the Clarkson family lawyer and others essentially tampered with a witness (Laughlin) in a criminal investigation by telling Laughlin to withhold information about Clarkson’s suicidal thoughts. That may have been what caused the cops to go after Spector since everyone close to Clarkson tried to paint a Clarkson as a happy and hopeful women who’d never kill herself. That effort nearly worked until Laughlin could no longer live with that deception and came clean with Spector’s defense tem after they contacted and interviewed her.

Was there a motive to place the blame on the wealthy Phil Spector to collect money from him by those trying to cover up Clarkson’s alcoholism, drug use, depression and suicidal remarks? One could also argue that the cover-up was done to protect Clarkson's public persona and memory.

Now comes prosecutor Alan Jackson, angry that his case for murder is flushing down the toilet as the truth surfaces during the trial. Jackson spent the day degrading Laughlin and accusing her of making her testimony up for a book deal that never existed. Jackson continually tortured the witness by rubbing her face into her failure to make an effort to notify authorities about Clarkson’s mental state to gain some sort of professional intervention.

It was laughable when Jackson tried to suggest that a crappy $9.00 an hour job at the House of Blues was somehow a wonderful and uplifting professional move for the 40 year-old Clarkson who spent her entire adult life trying to get her entertainment career of the ground.

Jackson came off as the Jackass of the trial by his behavior against this grieving witness.
Posted by Paul Huebl Crimefile News at 7/17/2007 06:09:00 AM

Paul this was another good day for the defense. I am beginning to believe he may be innocent. It would be unprofessional and biased for me to assume from the beginning, that Spector IS ether innocent, or guilty. But now after spending some time in my office, watching all the wits and all the facts, I am considering his innocence. Looks like the DA is succumbing to some of the lies and tricks that I mentioned in my linked article “Another Look at the Justice System.” I also believe Sara Caplan is a courageous truthful attorney, who ought to be in People’s Magazine as woman of the year.
http://hi-caliber.blogspot.com/2006/04/justice.html

They are recreating a magnificent marching scene and looking to cast real police officers, sheriffs, county guards and bag pipers to work as non-speaking extras in August on or around Friday, August 24th, Saturday, August 25th or Sunday, August 26th. They are excited about this scene and it is important to us to keep this scene authentic and memorable.

The rate of pay is $125 for 8 hours and time and a half after that. A nice lunch is provided. The real officers that have already been cast have been having a blast! There are other scenes available aside from the above dates.

If you are interested, please call the hotline at 312-924-1805 and leave your name and phone number and let them know you are calling about the marching scene.

Jackson a jackass? You bet he is!
He needs to convict Spector and add another notch to his belt and blossoming DA career. It seems there is no level too low for Alan Jackson to stoop.

This past Wed., 7/18/07, Mr. Jackson misled the witness with false statements trying to discredit evidence that Ms. Clarkson shot herself.

Judge Fidler should have already called a mistrial or been removed for his BIAS!

The Spector trial is a travesty of justice and I fear Phil Spector, an innocent man, will go down as compensation for the unpunished crimes of OJ and Robert Blake.

Regarding Psychological Mechanisms and an Illusive Critter - The Truth.

If you were in Punkin Pie's shoes and if the Lana Clarkson family lawyer and others tampered with you in a criminal investigation by telling you to withhold information about Lana Clarkson’s suicidal thoughts heard a few days before she died. What would you do in that situation that is if you were able to throw off this oppression later?


If it is true that Punkin Pie had initially been oppressed by others into keeping Lana Clarkson's suicidal thoughts to herself then Pie may have initially gone along with the story of Spector's alleged guilt for a year or more.

But once Pie set herself free of her oppression in having to keep silent and cover up what her best friend Lana Clarkson had said to Pie days before Lana Clarkson died - then it is possible that at the trial Pie was too embarrased to admit that she initiallly had made disparaging remarks against Spector in front of him.

Pie, thank you so much for coming forward and telling the truth.
Please tell you friend this too.
Phil Spector, is innocent.
Thank you for your emails,
Joyce Danelen at yahoo dot com