I Lost Another Friend Today 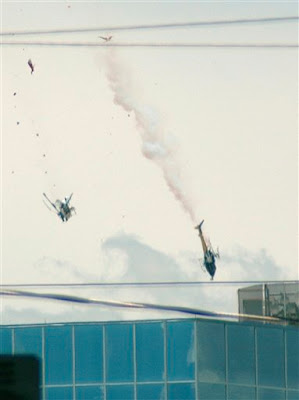 When you work with fine people you are never prepared to see any of them vanish from your life in an instant. That’s exactly what happened today in Phoenix, Arizona. My friend, Jim Cox of more than 15 years was killed covering a car chase in Central Phoenix as a video-journalist for KTVK-TV.

Cox along with pilot Scott Bowerbank were killed as was KNXV-TV's Craig Smith and Rick Krolak when their two news choppers collided in mid air. All of these fine men had one thing in common, they chose to be where the action was and died doing what they loved best. Their names are now added to a long list of people killed bringing their fellow Americans the news.
Posted by Paul Huebl Crimefile News at 7/27/2007 04:30:00 PM

Sorry to hear that,very tragic. Phoenix just had another terrible tragedy,a 23yr old Phoenix policeman was murdered. Bad week in Phoenix to say the least. May he RIP.

I flew with Scott Bowerbank. He was a consummate pilot and a good friend. I will miss him greatly, as will the Arizona aviation community.

Its so sad that the families are suing one another...

That’s crazy talk. Everyone is covered by insurance! Let’s hope every family can recover something,