Why Are Hollywood Casting Directors Allowed to Commit Criminal Extortion? 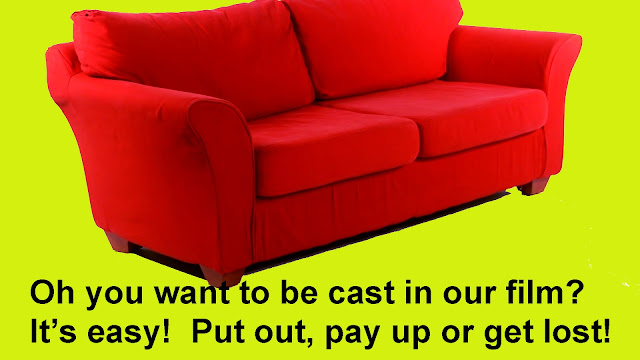 Los Angeles, CA—For those that don’t know this I am a member of SAG-AFTRA.   That’s the union that represents actors and other talent for motion pictures, broadcast and web related entertainment.
My union has worked to fight extortion when it involves sex in order to work but they’ve failed miserably to prevent actors from being forced to pay cash.   Young actors are usually broke and desperate as they try and compete for various roles.
Only a small percentage of actors have agents and those without agents have to get roles before agents will notice them.   In order to get seen and considered actors must audition with casting directors for he less important parts.  If you don’t get the small parts you can never compete for the larger roles.
The problem is the casting directors have set up a criminal enterprise and gotten away with it.  Actors are met with solicitations the moment they enter casting offices for acting classes.  The classes just happen to be run by the casting directors!
For the most part the classes are simply a sham but those paying for the classes get parts and the others don’t.  If actors don’t pay the casting directors they simply don’t get to play!
There are very serious civil and criminal penalties involved but casting directors have been escaping any and all scrutiny by law enforcement.  The most obvious crimes and torts involved are extortion, restraint of trade and criminal racketeering.
I ask why is a demand for sex in order to win an acting role and different than a demand for cash?   Actors want to work and making waves by asking the casting directors to end their extortion will in effect blackball the actor out of business forever!
Acting classes are absolutely necessary.   Actors must run through the repetitive process of learning lines, speaking them understandably and timing the dialog.  There are lots of issues that actors must overcome to avoid becoming caricatures rather than the characters.   However it should never be the casting directors running the acting schools!  That is an obvious conflict of interest.
I ask where has the LAPD, FBI and California Department of Justice been?  I know that is impossible for them to work undercover to dismantle this criminal racket without first joining SAG-AFTRA.
The victims here are young actors that are often struggling to avoid homelessness.  They are understandably afraid to complain about the people that have the power to banish them from acting altogether.
Law enforcement has not been effectively been able to deal with this institutionalized decades long crime wave.  Perhaps SAG-AFTRA and the talent agencies need to recognize their responsibilities in this area.
The Los Angeles City Attorney, Mike Feuer is asking that actors come forward if they have paid for classes or acting workshops run by the casting directors.  If you’re an actor and have the courage to report the casting scoundrels send an email to Feur’s assistant at karla.cortez@lacity.org.
The only way to stop this crime is not tolerating it in the first place!  Perhaps sending a bunch of these miscreants to Club Fed for a few years might send a strong message!

People should be able to work and show their talents anywhere whether that be in the acting profession, or politics, or in education without having to put out or pay out to be considered for work or forwarded to the front of the line - for the best perks or roles!

here's a silly idea, go BUY/RENT a cheap digital camera, and MAKE/MARKET your own projects, and/or submit them to film festivals, instead of putting yourselves in this kind of disgusting cycle.