The Death Penalty for Dummies 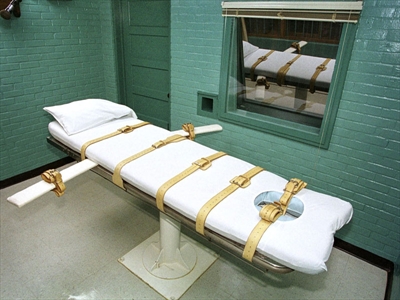 Phoenix, AZ—I don’t think the people that know me or visit my blog will ever question my Conservative/Libertarian credentials.  As a young man growing up I naturally hated criminal violence and wanted to see cruel killers exterminated.  Believe me when I say my thinking on this has not changed a bit.  Not all, but certainly most murderers do not deserve to live.
I’m also staunch believer in Castle Doctrine and Stand Your Ground laws as well as the absolute right of law-abiding Americans to carry guns wherever they wish.  The statistics overwhelmingly show that armed citizens save millions of lives every year.  In the vast majority of these incidents a gum may have been displayed but no shots were fired.
I never morn the justifiable killing of thugs like Travon Martin, home invaders, armed robbers, rapists or murderers.  I also believe that each justifiable homicide prevents as many as a dozen future violent crimes that otherwise would have been committed by the decedent.
The Death Penalty is an entirely different matter.  This is a pre-meditated murder of an accused suspect.  It is the product of our local, state and federal governments along with their appointed bureaucrats.  We all know how unreasonable government can be.  We have a criminal justice system that is awash in wrongful convictions, corruption and incompetence.
Our jury system fails when our government’s judges keep evidence from being seen by juries.   It fails yet again when jurors are not allowed to consider or even know what punishment the accused defendants faces.
No matter what your political persuasion may be you will see politicians elected or otherwise put in office that you distrust, dislike and even hate.  Do you want a government run by what you consider an evil politician to have the ability to have you arrested, tried, convicted and executed?  You may like who is in office right now but that can and does change in a heartbeat.
Keeping someone in a cage for life, with crappy food, harsh prison temperatures and abject loneliness is punishment that far exceeds a merciful lethal injection.   Just imagine what that would be like.


For taxpayers the Death Penalty is a total disaster.  The pst-cnviction litigation must run its course usually through a state court system of appeals and once that happens the Habeas Corpus efforts begin with a federal judge and winds its way to the U.S. Supreme Court.  That process can take 30 years to complete and usually costs many millions of dollars.  Needless to say you pick up both the prosecution and defense’s legal tab.  It’s much cheaper to imprison someone for life.
The Death Penalty has never been a crime deterrent beyond making sure the executed cannot reoffend.
With respect to every government on earth sooner or later history redundantly shows that they go bad and begin to slaughter their own citizens.  The Death Penalty is a control tool for Communists, Socialists and every Muslim Nation.   It’s a tool for America’s Far Left Wing.  You don’t see Obama or his political minions calling for ending this vile practice.  Ask yourselves, why not?  What’s past is prologue.
Please pass this around to your conservative friends.

Paul, you make a compelling case.

The Death Penalty may be a control tool but there are plenty of others- aimed to stop people who do or want to blow the whistle on Government crimes against their own people (or other people).

Retaliation by Government against those that report Government crimes corruption and cover up like Edward Snowden for instance, is also to chill others from doing the same.

Here is a part of a transcript between a reporter and two Congress people illustrating why Edward Snowden would not have been able to go to Congress to disclose the NSA programs.

This is because as Rep Thomas Massie said (see below) if Edward Snowden had gone to Congress he would probably already be in jail without the disclosure taking place.

So having had the experience - I can say Rep Thomas Massie is right on the money when he saysthat Edward Snowden could not report to Congress as he would already have been (assaulted, battered?) and in jail.

"AMY GOODMAN: But do you feel that Mr. Snowden did the right thing?

REP. THOMAS MASSIE: I think initially he did. And now, it would be hard for me to fault his actions at this point. He’s a person who fears for his life, and so, you know, he’s doing what he can, I think, to stay alive at this point.

AMY GOODMAN: I want to turn to—

REP. THOMAS MASSIE: And I don’t—by the way, I don’t think our government really wants to try him. It would be a difficult trial, and I think more things would be disclosed in the process of the trial. So it’s not clear to me that we’ve actually done everything we could to get him back here and try him. There may be another story there, as well.

REP. JOHN CONYERS: Well, I think that he was overzealous and probably didn’t. He has clearly broken some laws, for which they—now the government wants to prosecute him for. But inadvertently, he has revealed to us a whole area of secrecy and activity with telephone collections and other things that are now being revealed that would not have been revealed otherwise.

REP. THOMAS MASSIE: Can I just add that some people say he should have come to a congressman with this information. But there are actually probably 20 or 30 congressmen that already knew about this program. And if he had went to them, I think we wouldn’t be having this discussion, and he may already be in jail without the disclosure happening."

I am retired from a career in law enforcement and I think you speak for many of us on this topic. There have been a few in the past I celebrated their deaths at the hands of the state such as John Gacy and others I thought should have been put to death such as Richard Speck but not anymore.

I don’t trust this government or the media one little bit. They have broken the social contract and no longer reflect our American values. I’m old and tired and sick now but I will never bow to them. I live in fear that they will take my meager pension from me that I bought with the blood and sweat of my youth because I refuse to live on my knees. My greatest fear is that I will end my days an enemy of the state.

“Mercy to the guilty is cruelty to the innocent.”

I believe that with all my heart but today I don’t trust our courts either. I am frankly amazed that Mr. Zimmerman got justice in Florida. Amazed and overjoyed.

Rebuttal to Richard A. Viguerie's "A conservative argues for abolishing the death penalty"
http://prodpinnc.blogspot.com/2013/10/rebuttal-to-richard-vigueries-when.html