Was a Phoenix Ex Convict, Baby Daddy Really Smoking Weed While His Baby Cooked To Death in the Car? 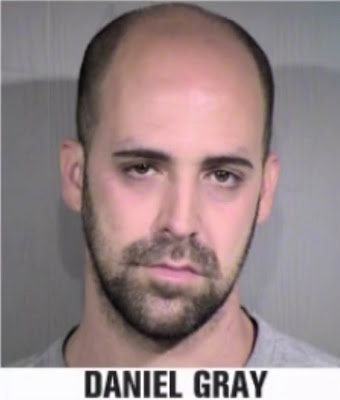 Phoenix, AZ--Daniel Gray is what you might call a real Marijuana Aficionado.  Between 2003 and the present he’s been arrested and convicted four times for felony marijuana related charges.  He took a bigger fall more recently when he went down for Aggravated DUI in 2010 and served time at the Arizona State Prison.
Along the way Gray garnered several misdemeanor convictions for Driving While License Suspended, Reckless Driving and False Reporting.
After his release from prison in 2012 Gray hooked up with Rebecca Hillary and made a baby three months ago who was named Jamison Gray.   Police say that yesterday apparently Daniel Gray used Hillary’s 2003 Oldsmobile to take a ride with the infant over to BT Sports Pub on North Scottsdale Road in order to smoke some weed with a new employee.
It was a typically hot summer day and the baby was left in his car seat for over an hour with no air conditioning while dad sat on the car getting stoned. The predictable happened and the baby perished in the heat.
It turns out that Gray and the infant’s mother do not share the same domicile.  So far Rebecca Hillary has not talked to the media.  I suspect that the mother will have a lot to say after she has learned just how her baby died.
Today Daniel Gray is in jail held on $100,000 bail and has a status conference scheduled for September 5th.   Gray is charged with one Count of Reckless Manslaughter and one count of Reckless Child Abuse
The horror of this story is unimaginable, unforgivable and disgusting.   I think that Daniel Gray will be come the underclass of whatever prison he’s sent to for this incredible crime.
Posted by Paul Huebl Crimefile News at 8/30/2013 11:54:00 AM

Any responsibility for a mom (Rebecca Hillery) who had a baby with Daniel only after waiting for him to get out of jail. She knew his past and was part of his present habits of them drinking excessively, smoking pot, and putting themselves before anything, even Jamison. Where does her responsibility lie in all of this??? The ONLY VICTIM here was Jamison!

Proabibly won't be nominated for "Father of the Year". I have heard of boneheaded mistakes, but this idjit stood there and slow cooked not only brain cellls he obviously couldn't spare but his son as well.
Selfish, and childish describe this behaviour, but not completely, why do people like this breed??

to the first poster, where does it say rebecca drunk heavily and smoked weed? all we know for sure in this horrible horrible story is that Daniel left the baby in the car when he was supposed to be caring for him. Making assumptions that she was negligent is not right, sure she could have picked a better father for her child but no one in their right mind would think he would do such a thing, she is now paying the ultimate price for her bad choice in boyfriend.