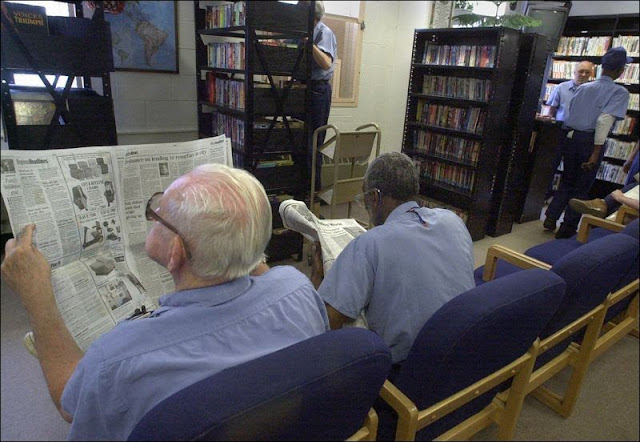 Los Angeles, CA—The State of California’s prisons are overcrowded, the state is broke and they have no choice but to release thousands of violent offenders on the street.  Crime will skyrocket as a result.
The most dangerous are the convicts between the ages of 18 and 35.  There is almost no hope with early releases they will not be victimizing others again.  The damage will cost taxpayers far more than building new prisons.
There are those prisoners that are elderly and disabled.  Some are blind, crippled and even suffer from dementia.  Others have advanced cancers and serious heart disease.  I really don’t care what these people have done.  If they are harmless we should not be wasting money keeping them behind bars.  Most of these people won’t be doing much of anything but filling assisted living and nursing homes.  If they are too frail to inflict violence there’s really not much risk.
What kind of violence can some inflict on others if they are attached to wheelchairs, oxygen bottles and walkers?
We need all the prison space for young offenders we can get.  California already does not sentence their felons to nearly as long sentences as other states anyway.  The young inmates are the real threat to public safety.  If they are not in cages they will rob, rape and kill.
It’s clear that thousands of able-bodied criminal predators will be prowling the streets.  California’s law-abiding citizens need to rethink leaving their handguns at home.  Despite California’s unconstitutional gun laws the right to survival supersedes the fanciful and misguided whims of the ivory tower types elected to the state assembly.

End the drug war release all non-violent drug offenders especially those for just possession. If you are not hurting anyone but yourself why should you be in jail?

And here we are in Colorado closing down multiple prisons because we don't have enough people incarcerated.