New York’s Stop and Frisk Mess, the Case and its Cause, Cost and Cure 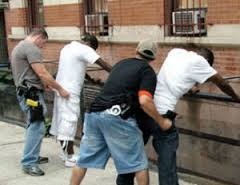 New York, NY—This is all about balancing freedom and liberty with the needs of public safety and using propaganda to frighten Americans.  Today millions of Americans really believe that the rights to keep and carry firearms and to be free from unreasonable searches will kill us all.
Let me challenge anyone to show us where, Congress or the President has the power to exchange our freedoms within the Bill of Rights for public safety.   Every despot,  fascist and  despotic ruler that ever existed promised the population safety through freedom restrictions.
Those that advocate trading hard won freedoms for the illusion of safety are woefully ignorant of history.  Our prisons are a perfect example that demonstrates that the trade does not work.  Prisoners have zero freedom and are constantly searched and observed yet inmates have drugs, weapons and routinely beat, rape and murder each other. If taking freedom in prison does not work how then can this   possibly help in a feee society?
This Stop & Frisk related class action lawsuit is called Floyd vs. City of New York.   The court has found that the City violated plaintiff’s rights by violations of equal protection rights and by making thousands of unlawful searches.
Police have been ordered to aggressively pat down people at every opportunity.  Needless to say the cops have concentrated on those troublesome types, usually African-American males between the ages of seventeen and 35.
Before my more sensitive visitors go berserk we have to examine the realities.  Violent crime and those out robbing, raping and killing in every major city in the United States are African-American.  The vast majority of victims are also African-American.  If you check the race statistics every large city morgue you will find the murder victims brought in are incredibly disproportionately African-American as is the population of the local jails and prisons.
This is not about skin color but a bankrupt and violent culture.  For some reason politicians, scholars and policy makers are too frightened to even discuss this social disaster.  This same degenerate social malady does affect other impoverished minorities in similar ways but not nearly to the extent it does African-Americans.
The reason the African-American crime culture exists is because of misguided tolerance by society and the demands by African-Americans themselves.   We can start by Liberal run city entitlement Czars that encourage or at least not discourage absentee fathers.  How can millions of teen unwed mothers raise children alone without having the social mess that exists today?  The Nanny concept of government has created a condition of genocide in the African-American communities of every major city.
Whether searches by police are with probable cause and or with warrants they will impact African-Americans much more than the less violent white people in their communities.
When the founding fathers promulgated our Bill of Rights, they knew about the future tyranny America would face from elected officials.  They took every step they could to insure the people could control the government and not the other way around.  Political propaganda facilitated by media and academia has brainwashed America that our benevolent politicians can somehow be trusted.  They have taught us to ignore tyranny.
We have become desensitized to invasive government searching at government buildings, airports, transportation hubs, concerts and sporting events.  SAG-AFTRA members cannot even attend a film screening put on by the Academy of Motion Picture Arts and Sciences in Hollywood without being frisked by security goons.  These searches are simply contrary to what America is all about.
These unconstitutional searches devalue and decimate our sacred citizenship.   More importantly we have gone trough to world wars, a civil war and numerous challenges without searching each other like criminals until this phenomena began about 40 years ago.
The law of the land on searches is still Terry vs. Ohio.  It’s a profiling case if there ever was one.  A cop with over 30 years experience, Mark McFadden saw three suspicious men that appeared to be casing a Cleveland business and made contact with them.  The cop became concerned that the men were about to commit an armed robbery.
One of the three fled as McFadden approached.  The other two, Terry and Chilton  remained but seemed very nervous and soon a frisk took place that uncovered each had man a loaded handgun.  McFadden made the weapons search because he feared for his own safety.  McFadden recovered handguns from both Chilton and Terry.   They were arrested, charged and later convicted with carrying concealed weapons.
This became a 1967 landmark case decided by the Liberal Warren Court.  It was what launched  the term, Stop & Frisk became part of American language.   McFadden was justified to conduct a protective search after he saw suspicious activity.

The Terry case was very controversial in its day and what was going on in recently New York far more intrusive, unlawful and outrageous.  It should have been stopped long ago.  Taxpayers may be paying millions to victims of bogus searches because of the clear violations of Civil Rights.  It is something we really can’t afford.
The rights of all Americans are under attack.   If we do not protect the rights of out troubled minorities who will protect ours?  The Floyd decision is a good one.  We must learn to depend on our own self-help to reduce crime and survive attack.  We don’t need any jackbooted thugs with quasi military uniforms to search us for our own protection.

They are not doing anything - they are just protecting us.

As Berlin and Washington respond to revelations that the NSA spied on Germans with the cooperation of German intelligence services, details of the vast scope and breadth of the American espionage operation continue to surface.

Most recently, Der Spiegel reports that an American military base at Griesheim, in Hesse state near Frankfurt, houses the headquarters of the NSA’s European Cryptologic Center, whose operations account for the agency’s “largest analysis and productivity in Europe”.

Stop & Frisk is the Same as Stopping & Frisking Your Telephone Calls, Data, What You Buy, Key strokes, Email and photographing your mail.

What may be the largest building in the world, seven times the size of the Pentagon, will -- if it opens -- serve only one purpose: to violate the Fourth Amendment.

Thanks for the article.

I am a law and order guy- not a cop, but I am a firearms trainer for police officers as well as private citizens. I have an academic background as a Constitutional historian.

The New York " Stop and Frisk" policy makes my skin crawl. I realize that many of these folks are indeed slime buckets, but combatting slime buckets must be done in ways that the Constitution says is acceptable.

Terry requires " articulable suspicion". Bloombergs "Stop and frisk" merely assumes every man on a public street is a criminal based on his location; secondarily it assumes the men on the street are criminals based on skin color.

In New York and Chicago, the police have abandoned Sir Robert Peel's canons; "the people are the police and the police are the people", they apparently have given up on the "balancing act" between liberty and police effectiveness.

I believe this is an unavoidable by-product of the Progressive Left's demonization of the the idea of armed private citizens - Bloomberg and Emmanuel want their cops well-armed and free to operate, but desire the citizenry to have no means of effective defense and be forced to wait on the agents of the state to protect them or pick up the pieces. This empowers the State and diminishes and infantilizes adult citizens - exactly what they want.

As soon as officers consider their oath to the Constitution as merely administrative formality, and think of themselves as a designated and superior "Other",not bound by the law themselves, or the Bill of Rights, Liberty is in danger.

In a free society, police must act with a respect for civil liberty, or else they become, wittingly or not, instruments of repression.

I hope whover established this policy gets sued, personally, for civil rights violations and pays enormous damages - if Hizzoner the Mayor approved it, I hope they dig in his pockets too.

As an aside, that is why I do not visit NYC, and last week, returning to Texas from the Upper Penninsula of Michigan, I took a 150 mile detour to avoid the entire state of Illinois.

1) Why are we growing such a large number of slime buckets?

2) Why do the voters in so many large cities continue to elect to public office corrupt and self-serving people who have no regard for the Constitution or the Rule of Law?

I hope you had some Pastys and fine craft beer!!! The UP is the 51st State. Go Wildcats!!!

The general public has for too long been confused by conflicting claims in this matter. On the one hand have been those who see or claim to see our police being hamstrung in their efforts to protect the public and enforce the law – the jokes about the Miranda procedure come to mind. On the other hand are the advocates of various interest groups always claiming that their clientele is being discriminated against. Thanks to Crimefile for exposing the truth of what is at stake here. In this matter the law-abiding must understand that their respectability is no protection against government abuse, and that by allowing the less respectable to be abused, they pave the way for government steadily to increase its power over all. And pointing out that the alternative to depending on government is to learn to depend on ourselves for protection is a strong selling point.