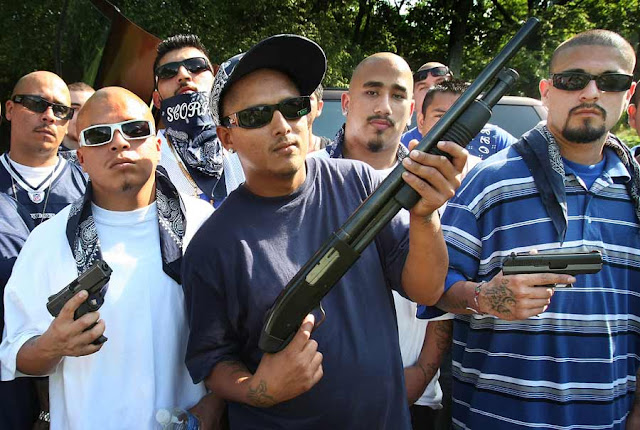 Los Angeles, CA—In addition to the felons and mental patients we know about there are some 11,000,000 people that are forbidden to possess guns in America.  Illegal aliens are currently in the class of prohibited possessors.  Most of them are from Mexico or Central America.
Things being the way they are we cannot determine these alien's criminal histories in their home nations.  Try getting criminal and mental health records from any of our Southern neighboring nations.  Background checks in that regard simply cannot be accomplished.
If our government grants Green Card status or citizenship to the illegal aliens they will automatically be able to purchase, possess and carry firearms.  We will have no way of knowing if they have criminal records for wife beating, robbery, rape burglary, drug trafficking in their own countries.  How about the dangerous mentally ill among them?  It only makes sense that once criminals are discovered they will want to relocate where their recent past is far behind them. Coming to the USA is an obvious first choice.
It is the political Left that is demanding amnesty for those that have trespassed into America.  It is the political Left that's been demanding full background checks on gun purchasers.  Here these two philosophies are colliding like speeding freight trains in the night.
Remember the political Left long ago put in lifetime gun bans for people convicted of a huge laundry list of crimes.  Here the illegal aliens are set escape whatever crimes they committed in the past like they never happened.  If you’re a dangerous illegal alien with amnesty you will suddenly have total legal access to firearms.  Of course if you are a natural born American citizen you will never have gun rights if you did something regrettable even as a juvenile and you’ve lived a clean life for decades.
Remember what George Orwell wrote in his book, Animal Farm, (under Socialism), “Some pigs are more equal than others.”
Posted by Paul Huebl Crimefile News at 8/28/2013 07:15:00 PM

Excellent point Paul. This is exactly what 0baMao would want, to greatly increase the crime and chaos in the U.S; to further his Regime's goal of NWO totalitarian control thru Martial Law throughout the U.S. and all our Territories. This is one seriously demented, radical and violent Revolutionary we have here, who might very well lead us into full Cicil War AND anothet World War, all at the same time. Remember the Great Deceiver of the Bible, and God's Warnings. Things sure do appear right on Schedule with Biblical prophacies.