Court Sentencing and Victim Impact Statements are about Showmanship, Not Justice 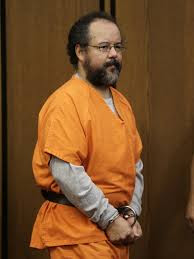 Cleveland, OH—Prosecutors lobbied lawmakers everywhere to create sentencing extravaganzas.  This is where so-called Victim Impact Statements are made.  Prosecutors have really succeeded in the efforts to change court rules under the popular guise of giving victims a voice.  It sounds like such a admirable effort until you closely examine what its really about.
Sentencing has changed into nothing more than a variation of the old time-honored Perpwalk for the defendants.  For the victims it’s little more than a perverted form of a Pity Party.
Today admitted kidnapper, rapist and fetus killer Ariel Castro got his turn for the spectacle.  Victim Michelle Knight dramatically told Castro, “You will Face Hell.”
They always begin by parading in the defendant into court in jail garb and chains.  Everyone is already aware of what sentence is coming to be handed out and nothing here ever changes the actual punishment.  In Castro's case it's 1,000 years.
Normally the defendant is asked to make a statement.  They usually maintain their innocence, mitigate their conduct or transfer blame to others.  Sometimes they are remorseful.  Their words always fall on deaf ears.  I guess there is voyeuristic fun to watch chained up miscreants squirm, stutter or remain arrogant.  It’s all really so pointless.
The victims and or their families are also paraded through the courtrooms, but as pitiful creatures.  They are rarely good public speakers and read from writings they collected on paper.  They often sob, express anger and almost never express sympathy for the defendant.  They are often nervous and very uncomfortable while speaking.   I’ve yet to see a crime victim win fame or fortune as a result of their exposure in these Victim Impact Spectacles. The same is true for obtaining closure.
Some so-called victims like the estranged father of Ron Goldman try to capitalize on their new fame.  Fred Goldman was a suit salesman who even got the opportunity to become a radio talk show host.  His continual whining about O.J. Simpson could only be tolerated so long and he was quickly and unceremoniously taken off the air.  Goldman never had a second act.  Goldman bitterly returned to his former occupation.
The word closure is repeated ad nauseam.  Closure is a word picked by prosecutors to coax crime victims to participate in these Sentencing Spectacles.  It’s nothing more than a false promise.  For real victims there is never closure. Time is the only healer, certainly not some emotional post conviction courtroom confrontation.
The use of Victim Impact Statements by prosecutors is for pure political gain on the backs of victims and nothing more.  The Victim Impact statements are here to stay because of the insatiable and morbid curiosity of court watchers.
The three women kidnapped, raped and imprisoned for years have begun to explore the marketability with appearances at events and such.  I wish them well but I’m skeptical that they can break the mold of publicly displayed victimization to find rewarding careers.
Posted by Paul Huebl Crimefile News at 8/01/2013 11:08:00 AM