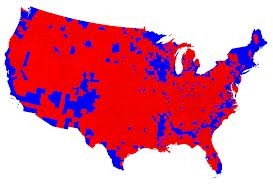 The United States is always viewed as more violent and singled out by gun related homicides.   To begin I don’t really think it matters how someone is murdered. Is it any better to be strangled, stabbed, poisoned or beaten to death?
Europe for all but the last 35 years has not had racially or culturally diverse populations.  Everywhere there is diversity culture clash in Europe violence has increased.  The Nanny state of the UK has alarming crime and violence with their immigrant population.  The UK is in such a state of panic they are regulating the manufacture of kitchen knives eliminating sharp points!  The UK's perception of weapons laws are somewhat bizarre. With each new weapon law they make crime escalates.
The vast regions of the United States have few or no homicides.  They mirror any European nation in crime statistics.  Oddly enough these are areas that are controlled by Republican or Conservative politicians.  They are also filled with productive and self-reliant Americans.  Gun bans and other regulatory schemes such as registration do not exist or are tolerated  in these places.
Then there is the other America.  Larger cities exclusively controlled by Leftist Democrats.  They have every kind of gun ban or regulatory scheme that criminalizes mere possession of firearms.  These are the places that have sensational murder rates.
On the political map above the red areas controlled by Conservative have few crimes and fewer gun laws.  The Blue areas are Controlled by Leftist Democrats and have every manner of gun bans and gun laws.
Are the people in Chicago made with inferior DNA material?  Are they mutant or somehow sub-human?  Are they born with special genes that make them unproductive, ignorant and violent?  The answer is clearly somewhere in the political landscape.  Crime seems to be revered and accepted wherever Democrats assemble.
In the Conservative areas of the USA there are those notorious gun shows.  Thousands of people can be found mingling together with all manner of firearms.  There’s never a discouraging word or any kind of violence.
Today the Democrats are dictating policy to the Conservative areas trying to force their failed values and laws on them.  Of course gun bans and restrictive gun laws are paramount with the Democrats.  Someone please tell me why peaceful, law-abiding productive Americans must be saddled with the failed policies of the far Left politicians living hundreds of miles away?
The vast regions of the USA with few restrictions can match any European nation on crime.  To suggest that the gun rights of Americans create or fuel crime is an outright lie.  We know what happens when you outlaw guns.  That failed policy guarantee’s that only outlaws will have guns.
Strangely it’s the political Left wing fringe that fears the gun owning Conservatives as somehow a threat. The political Left has been making plans with the NDAA along with FEMA resettlement camps.  We must keep the political Left’s poison, lawlessness and Socialist tyranny away from Conservative areas at all cost.
Posted by Paul Huebl Crimefile News at 12/29/2012 09:27:00 PM

I have been to England, and had a wonderful time, but noticed vast patches of London were under seige. I was there last year right before the rioting, and saw the potential for a storm there. Just like with the weather systems, social systems will create powerful effects when the differences between upper and lower gradients pass a certain point. I am unsure why only gun crimes are discussed in this context, but if you look at the violent crime rate as a whole, the UK exceeds the US by a substantial margian, and that is just one example. If you look at rural US against rural UK they are still skewed in our favor, and comparisons of urban violent crime is greater than that.
Switzerland is some times thrown out there as an armed society, but the advantage Switzerland hold over either the UK, or the US is they are a homogenous society, and do not suffer from the legislated rainbow of diversity that both of the other countries have mandated. They kept their borders,culture, and language and they are keeping their country. I disagree with Michael Wiener(Savage) on a lot of topics but agree withthe statement that " Any society that doesn't protect its borders, language, or culture is doomed to rot from within" this is a true statement.

The low-IQ occupants of the D. controlled US cities used to be controlled by a number of methods, now eliminated as "racist" or unlawful, not least of were effective organized crime families and the existence of the intact Black family.

Black boys, especially, were watched, spoken-to, and reported to their fathers rather than sweeping them directly from their mother-only household into "the system" that leads to unemployability and criminal training. Schools identified and tracked kids into the classes that they could handle, trying to teach a minimum useful amount of social behavior, literacy and counting to everyone then encouraging the brightest to advance.

Inner-city churches used to help control behavior. Afaict, they are now useless at this function.

American "professional" social controllists like to pretend that everyone is as smart and capable as everyone else. This is obviously not the case, and assuming it is gives poor outcomes for the whole society.

Then, as if there weren't enough trouble, there is Mohammadianism.....

"Are the people in Chicago made with inferior DNA material? Are they mutant or somehow sub-human?"

You really want a truthful response on that one Paul???

The answer to violent crime rates lies in racial demographics. Conservative areas of America are mostly white while areas with Democrat majorities are mostly black and Hispanic. Crime in Chicago would not disappear if conservatives were suddenly installed in city government positions. They couldn't get elected because the black and hispanic electorate rejects white, conservative politicians because they have an irrational hatred, fear and distrust of white people. This was validated by the 2012 presidential election results.

The sad fact is that as Chicago becomes less white and more black it becomes more violent. Just like Detroit in the 1960's through the 1980's.