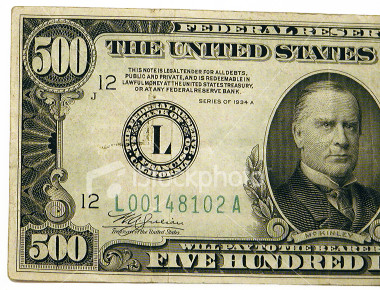 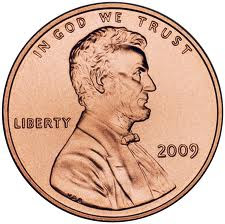 Washington, DC—Our currency has fallen light years behind inflation.  Americans deserve a break!
We should stop printing one-dollar bills.  Coins that are substantially larger than quarters are what we need so we can easily tell them apart.  The savings to taxpayers on printing costs demands we do this.
The penny has evaporated into insignificance even among the poorest of Americans.  They have become inconvenient refuse.  They break our vacuum cleaners as they clutter our lives.  It takes two cents to manufacture the worthless penny.  We need them out of our lives.
The one hundred dollar bill needs to be supplemented by returning the five hundred dollar bill to circulation.  We will be saving a bundle on printing the one hundred dollar notes because people will be using the larger bill more often.  Part of the printing cost saved can be spent on better anti-counterfeiting measures for the bigger bills.
The failed Drug War is what’s prevented larger denomination notes.  Big Brother wants to detect large amounts of currency easier.  The larger denomination bills would enable drug dealers to better hide their cash.  The Drug War was lost long ago and the world morgues have been over-flowing as a result of the related violence.  The loss of privacy, liberty and lives through violence has cost America far more than the drugs themselves.  Of course despite billions wasted on the Drug War we still have more illicit drugs on our streets than ever.
Far too many of those fascist bastards running our government want to eliminate cash.  They want to eliminate any and all privacy with government issued debit smart cards.  They want every American’s purchases, locations and amounts spent tracked.  That fits right in with airport cavity searches and regular warrantless home searches by bucket helmeted, boot wearing and armed government thugs. I for one will never adapt to that tyranny and will die fighting it first.

I disagree on the penny because I fear merchants and the government especially would round up or down in their favor, thus reaping a windfall in the long run.

The dollar bill on the other hand has outserved it's usefullness. Canada already uses a dollar and two dollar coin and Europe uses the Euro coin.

$500 bills, and maybe even $1000 bills should make a come back. I currently keep a $100 bill tucked away in my wallet for emergencies,but it would be nicer (after a bit of saving that is) to keep a $500 tucked away instead.

Should I hold my breath for these changes?

there's a much more efficient solution.


adjust the value on everything by moving the decimal point to the left one digit, thus returning value to the penny.


this would emphasis the artificial impression that numerical monetary inflation has had on the consuming public's of possessing phantom 'wealth'.

it would also make that obamination tax hike on 'millionaires' moot.

Pennies have been dropped from the overseas exchange system, because they cost more than they are worth to ship, and are worth more as metal than currency. Rounding either up or down averages out both for the customer, and merchant over the long run, and no one party truly loses out in the end.

"adjust the value on everything by moving the decimal point to the left one digit, thus returning value to the penny."

Ah,but that would wreck anyone (or anything) that is relying on paying back borrowed money with future inflated currency. When you hear about the fears of deflation keep in mind the people who are afraid have more debt than they can manage and worry about getting screwed more than they already are.

America is going the way of ancient Rome, and for many of the same reasons. After a time, the dollar will become as worthless as a South Vietnamese Piaster.

"adjust the value on everything by moving the decimal point to the left one digit, thus returning value to the penny."

That could be done, but to make it work, you'd have to remove 90% of the present currency out of circulation.