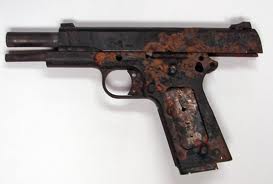 Los Angeles, CA—Gun rights haters are dancing in the bloodof the children murdered by that well known mentally ill Sandy Hook killer.  When he could not buy a gun froma sporting goods store he murdered his own mother and robbed her of herguns.  We know the rest.
Los Angeles Mayor Antonio Villaraigosa announced Monday thatthe city’s annual gun “buyback” event has been moved up following the SandyHook murders.   They moved it up bymonths to December 26, 2012
Bring your rusty and unserviceable crap firearms from 9 a.m.to 4 p.m. on Dec. 26 at two locations: Los Angeles Sports Arena, Parking Lot 6,at 3939 South Figueroa Street and Van Nuys Masonic Temple at 14750 Sherman Way.  This a no questions asked event so they can’tmake you prove you did not come in from Arizona and Nevada!
They will pay you $100.00 for any handgun, rifle or shotgun.  If they deem it an “assault weapon” you get$200.00.   They will pay you with giftcards instead of cash so use them up on your way out of town.  Then buy some new guns, ammunition and getsome custom grips from Eagle Grips!
Since they are using tax dollars enjoy your windfall with avengeance.  I only hope we can bankruptLos Angeles for this symbolic and wasteful foolishness.
Posted by Paul Huebl Crimefile News at 12/19/2012 10:06:00 AM

great idea ! Hope Hollywierd will be the first to tumble. They're the biggest Hypocrites, alsong with the rich, liberal-elite Hollywierd Celebrities, with their constant glorification of guns and violence in their movies. Lets see them all quit making their gun and violence infested movies, as a good example for everyone. Come on Hollywierd Hypocrites, Why Not? Surely you all have enough Million by now anyway. Show us some good faith. No? Well why not, Hypocrites ?