More than 500 Chicago Murders in 2012 , A Liberal Milestone Revealed. 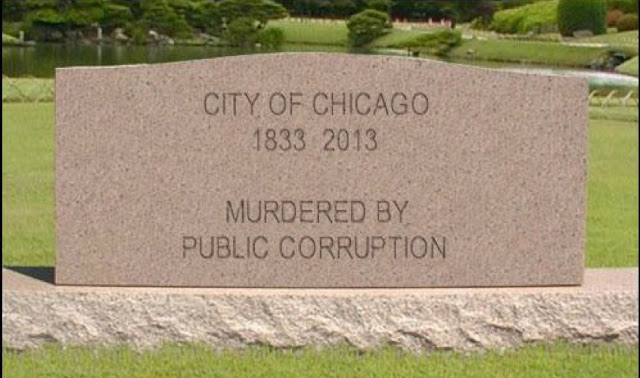 Chicago, IL—All of the elected officials and bureaucrats in the Windy City are Democrats and most are from the far Left fringe.  There are no Republicans or Conservatives to blame.  Here they have enacted the most unreasonable gun bans in the entire nation.
Corruption in Chicago is beyond legendary.  A significant percentage of the 50 member City Council are either street gang members themselves or are closely related to them.  When it comes to combating crime these politicians will try anything at all as long as it cant and does not work.
The policy of the city government is to insure that the city’s criminals are the only ones armed.  Over the years they even banned the cops from using police style shotguns.  They have allowed the police department manpower to dip into dangerous levels.  As they cite budgetary problems they handed millions in cash grants to known criminal groups such as Cease Fire.
Who could forget when the City bankrolled the old P. Stone Nation later known as El Rukin.  The gang members bought lots of guns, ammunition and capitalized their drug, prostitution and extortion activities in style.   The leader, Jeff Fort is still in a Club Fed warehouse somewhere today.
The criminal/political organization running Chicago knows that gang extortion and their armed robberies could be hampered if their intended victims could fight back.
The keeping and bearing or arms is an American Civil Right.  The city has shamelessly and shockingly violated those rights for decades.  The quality of life has diminished and thousands productive, tax paying citizens have fled for their very lives.
Is the 500 murders figure correct?  I say that it is much higher because of the way the administration cooks the crime statistic books.  They insist on classify a significant number of murders as open death investigations to avoid reporting.
The reason I know about this is that a few years ago I brought WBBM-TV and investigative reporter Pam Zekman a story showing the shenanigans.     I arranged to quietly obtain the entire database of the Cook County Medical Examiner’s Office.
We then pulled from the list the Chicago cases where the Medical Examiner listed the causes and manner of deaths by homicide.  When we compared that with the official police department’s Uniform Crime Reporting totals they undercounted murders by around 200.
People have a right to defend themselves and families even from criminals that are being facilitated, protected and enabled by government. Chicago’s government is a criminal enterprise that should be resisted and shut down by any means available.
Unfortunately Chicago cops can’t do their jobs as the oath they take demands.  They are far better off simply turning their heads when citizens use deadly force to protect their lives, families and property.   The younger cops are never going to see the money they pay into the pension system and better get out while they can.
Business in the Windy City is doomed.  The voter rolls are so over- bloated with the non-productive, entitlement addicted and the criminal element that there is no hope or help for the future.
Those 500 murders a year in Chicago is only the beginning of a horrific story.  Don’t forget that the 500 undercounted figure is pure fiction anyway.