Milwaukee and National Media Failed on their Reporting of the Sikh Temple Shooting. 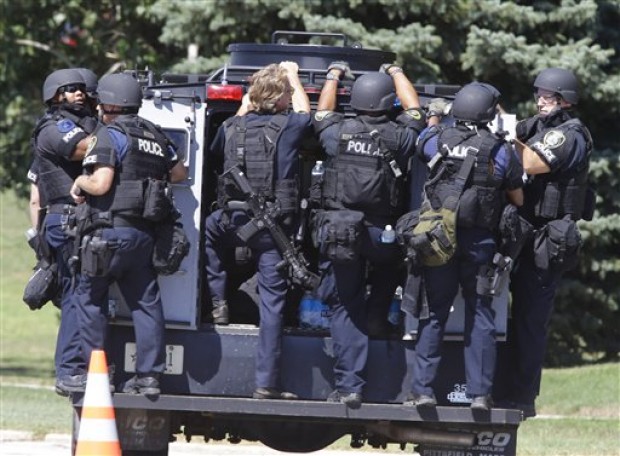 Milwaukee, WI—I guess the reporters in this town were all off enjoying their Sunday at Home.  A mass shooting at a Sikh Temple is apparently not worthy of any meaningful attempt at reporting.  Other than a few video and photojournalists that captured some material the media had nothing.  The reporting was limited interviews of a few on scene Sikh worshipers with more questions of their own than answers.
This important news story was totally produced and reported by police spokesmen!  There were simply weak rewrites of what officials reported rather than anything resembling enterprising efforts to explain this important story.
The media failed to notice the suspect’s vehicle that’s surely been towed by police.  That would have been an important thing to do. Getting the owner’s name and examining various court record and government databases was an overlooked must.
The police quickly raided a residence in nearby Cudahy and the media could have gotten names of residents to investigate.  They could have found plenty of people to help them build a profile of the dead suspect.
Local law enforcement quickly labeled the incident as “Domestic Terrorism” but weren’t pressed for any information or details that would justify that moniker.
The American media has forgotten how to do their jobs.  I guess we must wait for the obligatory ABC News, Brian Ross report to tell us that the Tea Party was behind the killings.
Have journalists been muzzled by government and intimidated into not reporting news?   This is a sad reflection of the death of journalism in America.
Posted by Paul Huebl Crimefile News at 8/05/2012 08:29:00 PM

Come on Paul it is after all Sunday and nobody's working! Nobody wants to cross the cops or they will get cut off from information. Yes, news has gone to hell and reporters here don't make squat.

There is no need to compete anymore because nobody cares. We are waiting for our first chance to escape to government PR jobs.

Give us a break, you know we can't make waves.

Paul, you are such a mean-spirited son of a bitch! You will always have a network of police spies feeding you information that most of us reporters don't have! The rest of us must rely on Terrible Tommy Thompson for a few bones.

You can't expect the weekend crew of any news organization to succeed at much of anything.

Yes when I worked with you you always said the investigation and background information done prior to the point that we released names.

No local news organization can afford your services these days. Milwaukee as you know is a small market. The national organizations can't get mobilized like they used to especially on the weekend. (D.O. In Phx)

Good for you Paul! Reporter seem to be too caught up in complaining about what they can't do and how they're underpaid but you are pointing out the basics. If, as anon. says, reporters are "afraid" to cross police then they do the public a disservice. Journalists have the power of the pen, tv, the Internet. Sounds like the only people who "don't care" are the ones doing the bad job.

Quit making BS excuses for the alarming lack of journalistic integrity, investigative capability and blatant distortion of the truth by the MSM.


Nobody believes anything you leftist propagandists say or report!


There is NO veracity in the media today!

I'm sure it's only a matter of time till broken-records Brian Ross, Chris Mathews, Midar, Mahr, CNN, MSNBC, Anderson Cooper, and the rest of the Communist Media blame this once again on the Tea Party, a non-violent group concerned only with Tax Reform, American, and Conservative Values.

This had the US Government's fingerprints all over it. It also has the fingerprints of the Southern Law Poverty Center (a known front group for the Israeli Mossad).

Hmmm, another False Flag operation to push the United Nations Gun Disarment Mandate down the throats of the US public. It won't work and Americans will never surrender the Bill of Rights.

Did everyone notice that the alleged shooter was a PSYOPS Solider? PSYOPS, meaning psychological operations and another Manchurian Candidate for their sick agenda.

The LSM is labeling him an Army vet. He is in fact an Army REJECT. His kester got tossed.
While they are looking for a TEA party connection, they pass the time degrading America's defenders. Maybe it will come out like this.
He was Army. Most military are conservatives. Therefore he MUST be a conservative. He is a radical. The TEA party is right wing extremist, thee for since he is a radical, he must be a TEA party leader.