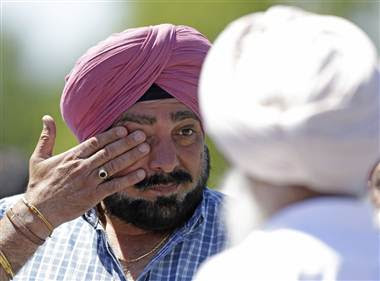 Oak Creek,WI—I’m beyond sickened to hear about the carnage at the Sikh temple in this Milwaukee suburb.  Let me dare to presume the motive and cause behind this senseless tragedy.
I’m convinced that the killer was deranged and mistakenly assumed his targets were somehow radical Muslims bent on the destruction of Americans.   I’m sure he believed that the Whitehouse and many of our politicians have abandoned their duty to protect Americans from the very real radical Muslim threat.  The killer simply decided to murder his perceived demons.
Sikhism is a somewhat new religion barely more than 500 years old.   It began in the Punjob region, as a bold movement by Indian Hindus that dared to separate from and renounced that religion.
Sikhs believe in a supreme creator and have teachers called gurus that are life mentors.  Sikhs live by the Christian style, Golden Rule in every aspect of their life.   They are a kind and gentle lot that are incredibly generous to everyone they meet.  Unlike Muslims, Sikhs accept and embrace all other religions and people.
You also need to know that radical Muslims have committed Genocide and every conceivable atrocity against them and have persecuted Sikhs throughout their existence.
Sikh men are not supposed to shave or cut their hair and are required to wear an identifiable turban along with a dagger called a kirpan.   The kirpan came as a result of a religious commandment given by Guru Gobind Singh.
It was Guru Granth Sahib who taught that a Sikh must also have the courage to defend the rights of all who are wrongfully oppressed or persecuted irrespective of their color, caste or creed.
Sikhs have managed to distinguish themselves on the right side of every major world war or conflict.  I served with a fine Sikh Medical Corpsman in the U.S. Army in Germany who was drafted just like me.  Yes, he wore his beard an kirpan with the uniform!
Unfortunately Sikhs in America have all but abandoned their kirpans capitulating to our un-Constitutional laws banning the bearing of arms.  They rely on police for protection and sadly have relinquished much of their religious duty to defend themselves and others.  Too many Sikhs living here listen to our misguided politicians instead of their gurus in that regard.
Let me be the first to encourage Sikhs living in America to again relearn the teachings of Gurus Gobind Singh and Granth Sahib.  These gurus were and are correct in their teachings.  The Sikhs that have chosen to live in America have the absolute right to keep and bear arms under our Constitution.  They still have all of their their religious and moral duty.
Let me tell you about the first known post 9/11 senseless murder of a Sikh in America.
In Mesa Arizona there was a fine Sikh family that settled here to persue the American dream.  It was the Singh Sodhi family.  Balbir Singh Sodhi owned a gas station and mini-mart and employed Both Americans and Mexican Americans.  Balbir wore his turban as he proudly and honorably served the people in his neighborhood.
Balbir was as horrified and indeed saddened as any American by the attacks by radical Muslims on September 11, 2001.  It was just a few days latter when a deranged lunatic, Frank Roque gunned down Balbir as he was working.
Roque somehow believed he was heroic and wonderful for murdering what he thought was one of the Arab terrorists.  Roque was arrested tried and sentenced to death.  Later, the Arizona Supreme Court reduced that sentence to life without parole.  Balbir Singh Sodhi was yet another victim of the 9/11 attack
It was Balbir’s brother, Rena Singh Sodhi that told me about this crime through his tears just days later.  I met Rena as he was purchasing supplies for his restaurant at a Phoenix Costco store.
Let me say I’m very close to a Sikh Family and have been for more than 40 years.  I have met many of their friends and have attended weddings and many other family functions with them.   I’m routinely their guest at the family estate in India and have toured the nation with them.  India is a safe and beautiful country where I’m always treated like visiting royalty.
I have learned one thing about the Sikhs.  They may seem shy but if you need help anywhere in the world I will guarantee you that Sikh with the turban will do whatever he can to help and or protect you.
I want to inform my blog visitors that they have a duty to protect Sikhs too.  As for my readers that are firearm trainers and such to please reach out to any Sikhs and take them to your local gun ranges.  You will be glad that you did.

Sad story. One must wonder if this was another government produced "Manchurian candidate".

The timing of these massacres and the attempt to disarm US citizens via the United Nations mandate makes me suspect the worst.


We live in deceitful times and Satan prowls about like a roaring lion waiting to devour souls.


May the truth and the life of Christ heal and protect us all.

I will say a prayer for the Sikh victims.

not to forget the loyal GURKAS of British army lore.During the ww11 a large group were captured after the fall of Singapore and told by JAPANESE conqueres that if they as fellow Asians renounced their allegience to the King of England they would be set free to make their way back home,entire group totalling about 1,000 refused and were executed by the Japs,now that was true loyalty.old rtd chicago copper.

I met a local Sikh while hanging out at the local 7-11...(Don't we all?) Over the weeks speaking to him, I learned he was working to suppliment his income from his main job as an engineer at Motorola. On several occassions he had his young son with him, they both wore their turban. He explained what the turban meant and it was a real lesson. Very nice gentleman.

And to go 180 degrees around, it was the same 7-11 that had employed Jeff Erickson who later became the infamous bank robber. He had seemed perfectly normal and a nice kid, until he got married...he must have snapped.