The Nationwide Anti-Obama Demonstration that never was 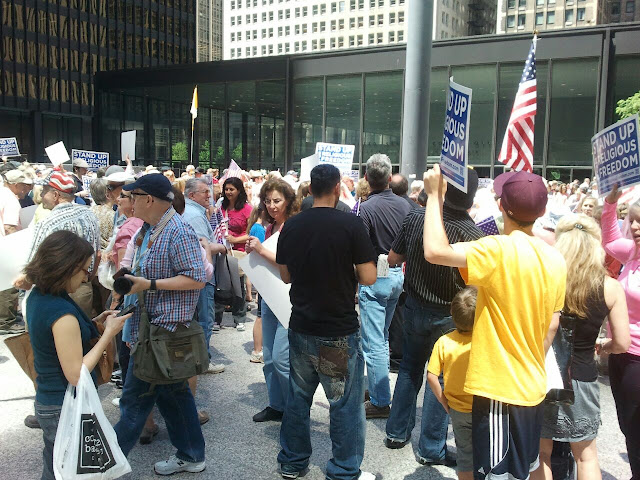 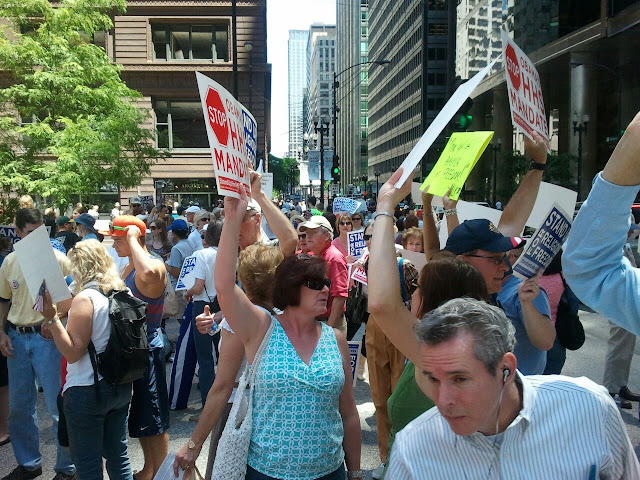 Chicago, IL—Today in 168 places across the United States, upwards of 100,000 people, mostly Christians and Jews held peaceful joint protest demonstrations against the Obama Administration.  Specifically mandates requiring tax funds to be used for birth control and abortion in Obama’s massive Health Care law.
This was about America and our longstanding institution of religious freedom that has been revoked by Barack Obama and his unelected and un-vetted Czars.
Some 2,000 people came to Chicago’s demonstration as impressive numbers were also assembled in cities from coast to coast.  You never heard from the media this was going to happen and when it did the media again refused to report that it happened.
The reason is beyond simple the mainstream media is dominated by Leftists.  They have become a political machine, that’s committed to saving Obama from any embarrassment or exposing his loss of popularity.  The mainstream media is by far Obama’s most loyal cheerleading group.
There were no injured cops or broken windows involved here just a bunch of angry but well-behaved people that want their freedom returned.  I guess that’s not newsworthy.  Just ignore what you’ve read here and conclude the photos have been faked.  According to our major news providers this event never happened.

I saw it and wondered what that massive crowd was about. Anything to stop this tyrant, wish I was there.

Oh, forgot to mention that former President Bill Clinton walked through the periphery of the rally and smiled and waved to all, how bizarre is that???

Good catch whoever contributed that former President Bill Clinton showed himself at that rally. I think our former president knows full well how dangerous the president is wants to help stop him. There are a plethora of reasons why Clinton would be in the anti-Obama camp, the most obvious being that another term for Obama would effectively end his wife’s political career.

We shouldn’t harbor any delusions that former President Clinton has suddenly become a patriot. Whatever his motives are for moving against Obama, you can bet they’re self-serving. He is a Democrat after all and they view public service only as a means to grab personal power and enrich themselves. However right now for me the enemy of my enemy is my friend. Our republic will not survive another term with that narcissistic megalomania in the White House. The necessary for his removal is too important. We must welcome anyone into our camp who is dedicated to our common goal to end this threat to our republic and way of life, even a draft-dodging liar like Bill Clinton. We can sort out our differences later; right now we must focus on the common threat.

Look at history, the first thing to be attacked and destroyed is the Church when the Marxists come to power.

If we don't stop this menace things will get much worse than they are.

History repeats itself over and over again.

Saul Alinsky praised Lucifer as the first rebel and his inspiration.

That statement alone tells you how evil Dictator Obama is. Alinsky is the role model that Obama admits to modelling himself after.

Funny there was not a mention of this in the media, not a word!

Ten Commie hippies hold some horseshit protest it will be lead news.

I no longer watch television or purchase newspapers. They are filled with drivel and Marxist propaganda.

I only found out about it after the fact because I work in the building above La Salle Street Station.