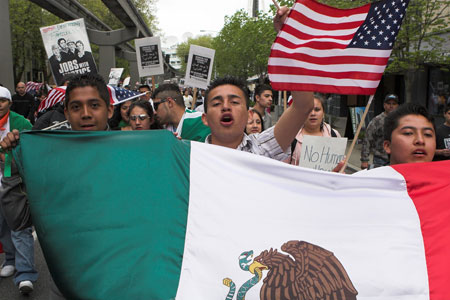 Washington, DC—Despite claims of open government and transparency the Obama Administration put a bunch of unelected Left Wing lunatics in charge of reinventing healthcare and insurance.  They had a lot of things in mind bout none of them were about the rights of all Americans under our Constitution.
The Obamacare project or that Socialist conspiracy was passed into law by a congress that had admittedly not even read the massive legislative package.  The bill was passed on pure partisanship and 'faith'.  That alone should invalidate the whole mess.
Our Supreme Court will weigh in on this monster Thursday and it already looks as though it’s in for a well-deserved, massive rewrite.
Now back to the real healthcare crisis at hand.  I said we have a created crisis.  We must examine just what we did that deprived Americans of affordable insurance and healthcare.
The cost of healthcare has skyrocketed primarily during the last four decades when we through non-enforcement invited millions of criminals, poverty refugees and assorted trespassers to ignore our immigration laws.
In America no hospital emergency room can turn the sick or injured away because they can’t pay or if they are illegal aliens.  That includes pregnant women about to give birth.  All of Central America knows this and have enjoyed free medical care for decades at the expense of all Americans.
Every medical bill sent to patients or insurance companies must be and is drastically inflated to cover those loses and to insure enough profit to keep hospital doors open.
The other problem is that we insist upon treating the sick and injured that refuse to cease their sometimes incredibly risky behavior and health habits.  We just won’t say no to anyone.  It’s not fair to force insurance companies to cover drug addicts and violent criminals.  Of course we have a percentage of the population that is horrified of any thought of requiring personal responsibility.
We must begin by returning Central America’s trespassing medical freeloaders back where they came from.
I’m not anti-immigrant nor am I a racist.  Hundreds of thousands of aliens have earned their citizenship through military service.  I would not be opposed to a program that would allow the illegals to return to their countries of origin and apply for legal visas and eventually citizenship.  The ability to read and write English on a sixth grade level would be a reasonable entry requirement.  It’s legal immigrants that have made this country great.
Our telephone systems also need to change.  Press one for English, or Two to get deported.
We should give serious preference to immigrants that can demonstrate skills and abilities that would keep them off the welfare rolls.
As for the so-called Dream Act concept of legitimizing those smuggled into America by their parents I am inclined to consider letting them stay based on school performance and excellent behavior.   Their parents on the other hand should be located and deported.  A Green Card and the path to citizenship must also come with a price such as honorable military service or some similar public service.
The open border Leftist propagandists have, deceptively redefined Immigration Reform.  We need reform all right, which is to reform our enforcement efforts, as Congress originally intended them.
As for American healthcare policy, we cannot begin to deal with this until after we reverse the damage done by millions of impoverished and ignorant trespassers.
Socialism can only exist with a massive percentage of the population being kept ignorant, dependent and poor.  It’s the Socialists that have infiltrated our government that are constantly engineering the failure of our free market and Capitalism.