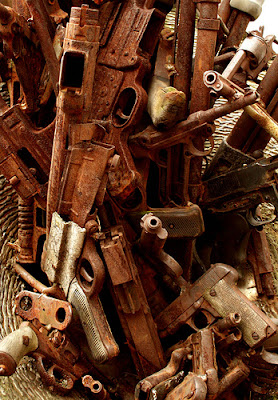 Chicago, IL—The Windy City’s Political Gadflies will be out in force once again.  They are hosting another so-called Gun Turn In for guns, bb guns and toys.
People once again will be enticed with immunity from arrest and gift cards to turn in virtually anything that even looks like a gun.
These events bring people in from suburban areas, Indiana and Wisconsin who are able to sell Chicago some completely unserviceable and worthless firearms.  The truth is that area firearm dealers (remember Chicago has no firearm dealers) go out of their way to collect junk to bring in for substantial profits.
Chicago's gun-rights hating political and religious advocates will all sing and hold hands while they convince each other that they are somehow saving lives.  The problem here is there exists no data whatsoever, anywhere that can even provide a shred of empirical evidence that a single injury or death is prevented by these efforts.
One thing for sure, is that anyone wanting a serviceable weapon can use the proceeds obtained at the Gun Turn In to buy a working gun and live ammunition.
This is not going to lower the vast numbers of senseless shootings that almost exclusively happen in Chicago’s ghettos.  This will not save lives.  This is nothing more than a very extravagant and expensive effort at symbolism over substance.
This will however cost taxpayers a bundle for media ads, manpower and the cash paid out.  We can continue to wonder how many additional burglaries and gun thefts will take place because of this heavily promoted Chicago fencing operation?
As usual, Chicago’s worthless members of the media will ask no questions or talk to nobody from the NRA or Illinois State Rifle Association.  They will never ask who pays for this fiasco or how much it really costs taxpayers.   That’s because Chicago’s media has become nothing more than public relations agencies for local incumbent Democratic political campaigns.
Chicago’s political incumbents can always count on lots of valuable face time courtesy of local media by simply repeating the same failed and money wasting programs like the Gun Turn In.

Right on Paul! I see it all the time. Folks bring junk to gun dealers, they either buy it cheap, or tell the owner they'd get a better price on "turn in" day.

They fund a large part of it by shaking down small business owners in every district. Especially business' that need a license,bars ,liquor stores etc.

Buy BB gun from Walmart for $17, give to CPD for fif-ee bucks.

what better way to be a targeted by turning in all your weapons and potentially followed back home...smh

Worked with a guy some years back from Chicago. He used to brag he could get anything if we wanted it. One day at lunch, some one said they wanted an RPG.
The following week he returned from vacation with a picture of him holding an RPG and a Sunday paper.

There are thousands of RPG looking devices and self-contained rocket launchers out there that are perfectly legal because they are considered expended rounds of a munition and cannot be reloaded and therefore are harmless but they still look impressive. These devices get turned in and the police officials love to pose for pictures with them suggesting to the media dumb shits that they are somehow capable of huge destruction. Pure propaganda at its best.

I take advantage of this scam every year to get some money back from the city.
I have people give me old crappy worthless junker guns and turn them in for moola and buy myself a new nice gun.

I heard that someone turned in an M-60 light machine gun. LOL!

I really doubt the suggestion they took in a real M-60. There are tons of air-soft copies and they have manufactured a semi-automatic version of the M-60 that’s belt fed. Just more propaganda to justify wasting tax money of Leftist feel good garbage…