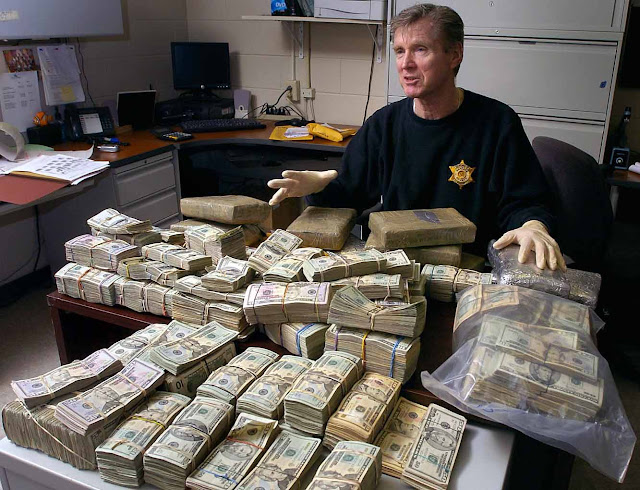 Washington, DC—Millions of America’s inhabitants are addicted to chemicals that have been outlawed.  The list of banned substances grows every day as ignorant politicians try to enjoin pathetic people seeking new ways to escape reality and experience intoxication.  The police state constantly increases its grip on innocent people that don’t use or want drugs.  Then there are all of us that must pay for the massive failure called the Drug War.
The simple truth is that drug laws have not prevented those who crave illicit drugs from obtaining them.  The laws have not saved lives.  On the contrary the laws have resulted in thousands of killings related to drug trafficking.  Unfortunately many killed are not involved with drugs.  Thousands of lives have been shattered and destroyed by bad police work, botched drug raids and false imprisonment.
The very worst of criminals and corrupt government officials are being obscenely enriched because of the Drug War’s guarantee to keep drug trafficking profits at the highest levels. We have the absolute power to put these criminals out of business in a single day, by simple legalization.
How should we legalize drugs?  Some say regulate and tax them.  On it’s face, collecting taxes on the backs of drug addicts sounds great.  The reality is that continued regulation and taxing of the drugs keep opportunities for government corruption and the same criminals we seek to bankrupt.  There should be no regulation of drugs marked to feed recreation and addiction.  Consumers of the poison need to beware and find their own methods of quality control.   How is that somehow different that what’s going on right now?
Drugs sold for therapeutic reasons still need the FDA and quality control.  There should be no changes here other than to let physicians prescribe whatever drugs they see fit for their patients.  Heroin has a legitimate place in pain management and treatment of elderly and dying patients.  Physicians cannot now use it for any patient for any reason.   In this regard cops need to be removed from our doctor’s offices.
We need to end the arrest, searches and, prosecutions of anyone for mere possession, manufacturing or sale of drugs.  We can do this while keeping the violent behind bars along with those involved with government corruption and money laundering.  That same should hold true for those who have not reported or paid income tax on their ill-gotten gains.
If we take these simple steps, we do know that street crime will drop to the lowest level ever.  There will be no more turf wars, between drug lords.
Right now many addicts have habits that consume well beyond $1000,00 per day.  They can’t earn the money any other way than theft, burglary, robbery, sex commerce and involvement in the illicit drug trade.  The outlawed drugs would not exceed to price of sugar, coffee or tea without the prohibition.
If the Drug War had any success at all I guess continuing it would have some benefit.  However we all know the Drug War’s only benefit is to make rich criminals richer.  Why do we tolerate and continue feeding this disaster?
I would like to see the day that addicts seeking treatment to get well can simply walk into a medical facility to turn their lives around.  Instead we have created scam opportunities for bogus government drug treatment contractors that do nothing more than warehouse addicts simply to shave prison time off of their punishment.
Drug addicts are easily hated and demonized.  They are a desperate lot that will victimize or do the most despicable acts just to feed their habits.  Perhaps it’s the right time to help these sick bastards become healthy and productive.
Posted by Paul Huebl Crimefile News at 6/26/2012 10:53:00 AM

Is that a pic of the area south guys diving up the pay off money??a