Bruce Jenner’s Accident is No Crime! 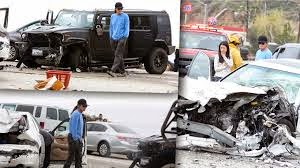 Malibu, CA—Earlier this month former Olympic champion, Bruce Jenner was involved in a fatal accident on Pacific Coast Highway.  Jenner was driving a Cadillac Escalade towing a trailer.
As most of my blog visitors know I’m a former cop and licensed private investigator for longer than I care to admit.  I have conducted many fatal automobile accident investigations and understand the process.
A white Lexus was in front of Jenner’s vehicle being driven by a 68 year-old Arizona woman driving with an expired driver’s license.   She suddenly slowed down for no apparent reason.  Jenner apparently hit her and somehow pushed her Lexus into oncoming traffic.
A Hummer then struck the Lexus head on killing the woman.
Apparently there was no evidence of excessive speed or impaired driving involved.  Right now sheriff’s officers are trying their best to reconstruct the accident to determine fault.
Just because there is the tragedy of a fatality does not change this from an accident. Eventually Jenner could be determined to be at fault.  That’s purely a civil matter for the insurance companies to fight over.
Yes, Jenner could receive a minor traffic citation for Following Too Close.  That accusation would have to be proven in a court trial and if so Jenner could face a fine.  Jenner could still avoid the fine, conviction and points on his driving record by simply attending traffic school.
Jenner did what I’d never recommend to anyone.  He fully cooperated with police and submitted to a totally unnecessary and embarrassing field sobriety test (Simon Sez).
This is an accident pure and simple.  Accidents happen and the media at this stage suggesting potential Manslaughter charges is both libelous and vile.
Video recreations are not evidence unless and until engineers and qualified accident reconstruction experts are allowed to testify about them in court.  This investigation is nowhere near the stage of actually finding fault.
This has turned into a case of implied guilt by celebrity, not by facts or evidence.  Jenner has enough misery on his plate without the wild speculation and sensational innuendos.
I think we need to wait until the police investigation is complete and see if Jenner actually needs to attend driving school.  This is not going to result in criminal charges!
Below is an animation that is NOT actual evidence, but simply suggests a theory of what may have happened. The video shows no criminal behavior.  It may support a minor traffic citation being issued to Jenner if it was somehow actually validated.  Just be aware this is not actual evidence!
Posted by Paul Huebl Crimefile News at 2/19/2015 03:39:00 AM

Paul, is it possible to repost this article on my blog in full with video with attribution, of course?

Generally speaking the striking vehicle is always at fault because regardless of the circumstances the driver is always expected to maintain enough control to avoid collisions. If the driver of the other vehicle suddenly reduced speed then Jenner was obligated to reduce his own speed in a like manner.

At least that is what I learned at the Chicago Police Academy. Did they teach you something else?

The Chicago Police Academy was a great place to learn about traffic accident investigation and enforcement.

They taught us to fix responsibility and cite those people that violated traffic laws in accident cases. They never suggested that we arrest people for Murder or Manslaughter over minor traffic violations.

If someone’s wanton disregard for human life was involved that would be different. A reckless driver killing someone while fleeing from police, or being intoxicated, or during some other felony crime would justify those kinds of charges.

Jenner may have been following too close as to avoid a collision here. That’s not a major felony crime in any United States jurisdiction.

We have a civil justice system for minor traffic torts, that brings financial compensation to victims and that’s why we have liability insurance.

I generally allow people to republish or reprint my articles provided that they give me the web URL of their publication first.

Thanks, Paul. My site is https://sangabrieltutor.wordpress.com. It is relatively new. Have yet to narrow the topics or build adequate number of posts, but I am working on it. Thanks for your time.