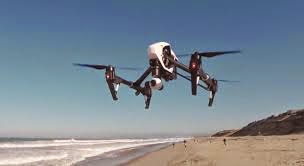 San Francisco, CA—The camera drone industry is growing at breakneck speed.  Engineers especially in China are competing to make most reliable, safest, and easiest to operate drones.
DJI is the undisputed leader of the pack.  They put out the wildly successful Phantom and Phantom 2 consumer models multi-rotor drones.
They either use the great little GoPro Cameras or their own built in offering.  DJI should stick to drone making and there is now evidence that they are partnering up with Panasonic and at least one other company to make photography history.
I’m beyond delighted with my Phantom 2 and GoPro unit.  I learned how to fly it through the generosity and kindness of an American Airlines pilot pal along with my drone hobby shop proprietor Sergio of PiroflipRC in Van Nuys, CA.
There is a learning curve and the drone engineers are not writers but still must write the instruction manuals nonetheless.  When you add in a Chinese to English translation, things tend to become, lost or scrambled.
Thankfully there are lots of helpful YouTube tutorials to watch but there is still nothing like an experienced pilot personally guiding you through your flight checklist.  The excitement of having that drone too often causes the new owner to rush out and fly alone rather than wait for some assistance.   The results are often needless crashes and broken parts.
When a brand new drone model hits the streets there are often a few bugs waiting to be discovered and corrected.  There are complicated software and hardware issues that must undergo beta testing.  The competition to get any new model out robs the makers of sufficient time to discover problems.
It was just a few months ago when DJI and the Public Relations people unveiled the all new Inspire 1 at Treasure Island to an invited group of dronie VIPs.
DJI hired two terrific photographer pilots to make epic demonstration  films.  One was in Germany and the other in Southern California.  The films were incredible eye candy or what I like to call drone porn to drool over.
The California pilot photographer was so rightly proud of his work he put it up on YouTube days before the planned Inspire 1 unveiling.  That mistake in judgment cost that pilot dearly.
There was another noticeable problem in that the Inspire 1 camera and gimbal.  It could be seen visibly shaking from vibrations during flight.  That seemed simple enough to fix but it was a definite turn off for many potential buyers.
There was yet another issue with the camera using European 4K rather than the USA version.  Frankly they should offer a new modular gimbal for the superior GoPro cameras.  Also most drone owners already have them anyway and they should not be forced to buy an arguably second rate camera they don’t want or need.
The Inspire 1 is a dream machine in every other respect.  It returns to the controller rather than the take off location allowing it to be operated from a moving boat or vehicle.  Its parts positioning prevents the propellers or landing gear from ever being in the camera shot.  Unlike the Phantoms the Phantom 1 can fly indoors safely without GPS.
The Inspire 1 allows for using two operators,  one for the device and the other for the camera.  It’s well worth the additional $1,500 over the Phantom 2.
DJI decided to simply hand out their new Inspire1 to bloggers like me.   Well not exactly, because sadly, I did not get one.  DJI needed some good reviews published by the unveiling date.
When you send out a product for review you must be prepared for anything.  One lucky recipient reviewer had the Inspire lift off from his driveway and then as luck would have it, it crashed right into his garage door.
DJI quickly took responsibility saying the problem was fixed by a firmware update.  Whatever the reason was, that YouTube video was really rude and cost DJI a bundle after getting 650K viewing hits.
DJI has not been normally been brave enough to eat the financial losses of crashed or lost drones and there is no insurance for consumers. The risk of a sudden $3000 plus loss can be a frightening and real possibility.
My personal strategy is to wait a few months and let others go through the experimental difficulties with the new products so I can suffer less pain.  Of course these Inspires were provided by DJI.
I’d say the DJI leadership and marketing people learned a hard lesson.  Perhaps that photographer that jumped the gun deserves a second chance?   Who knows more then he does now to never release the client’s video until its time?
Next time DJI should let me get the product and write the review.
Let me say again that my DJI Phantom 2 is an incredible part of my growing multi-rotor camera air force.  I also want their S100O to use with a Panasonic GH4 and a live broadcast quality transmitter for TV news or streaming video broadcasts.
Then, I want a spare S1000 incase the other needs servicing for whatever reason.
DJI must hire lobbyists and lawyers to fight off FAA and legislative tyranny.  I know how to lobby the various legislative bodies effectively and would want to take that assignment on if I ever had a chance to do that.
In the meantime, the drone competition is red hot and DJI has the lead, but for how long?
Sit back and watch a brand spanking new DJI Inspire 1 attack a perfectly good garage door!