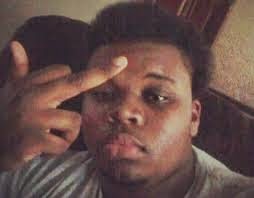 Ferguson, MO—Michael Brown was an accomplished thug.  He was a large and cruel monster that a just moment before he died was captured on tape terrorizing a shop owner while committing a vicious strong-armed robbery.
Contrary to fanciful thoughts we are not all equal.  Some are smarter, taller and stronger.  Charles Darwin said it best we were not all meant to live and that only the strongest survive.
Michael Brown was born with a birth defect that made him vulnerable despite his superior strength and size.  He was incredibly stupid and at the same time extraordinarily mean.
Young Brown somehow though that he could engage in a physical confrontation with a police officer and somehow win.    That was an extraordinarily foolish act and it cost him his life.  Frankly the world is a better and safer place without this savage creep.
Now there are plenty of ignorant supporters of Michael Brown and his evil ways.  They are amassing in Ferguson and are egger for enough misinformation and hatred to spark violence.  The plan is to loot, shoot, bomb, rape and murder their fellow citizens using their inflated claims of racial injustice as an excuse.
Yes, this is all about racism but just who are the racists here?  This is about some African-American’s hatred of White people and their desire to dominate and conquer them.   They have pipe dreams of capturing and taking home the spoils of war along the way.
The problem for these troublemakers is they, like Brown are too intellectually disadvantaged to live.   They somehow think that they can succeed in street warfare simply because they are cruel enough.
What they are not taking into account is that aside from the cops and National Guard they have to overcome thousands of able military veterans in the local population that are well trained and well-armed and only too willing to protect themselves and families.
If these African-American agitators attempt a dangerous insurrection, their oversight will get their remains placed into lots of body bags.  These are simply the inferior human specimens that Darwin warned us about.
Often humans work to protect the unfortunate and disadvantaged to survive despite obvious handicaps.  Here they are warning the ignorant, thoughtless and very stupid people to abandon their pipe dreams and to stay home.  Let’s hope that they come to their senses.
If these troublemakers won’t follow that sound advice Darwin just like he did with Michael Brown will quickly take them home.

You sir, are one thousand percent correct with this post.

Truthfulness, honesty, common sense, ..lost arts, but expressed well here. I am now proud of my combination of European background and creative contributions made. I just wish I learned the German language. There is no liberal white guilt and such foolishness here.