Ferguson, a Lesson In Sensational Race Baiting and Hatred 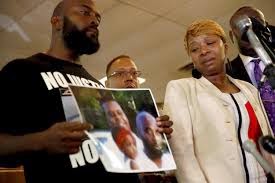 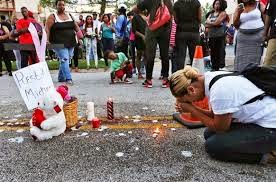 Ferguson, MO—Michael Brown lived and died as a bully and thug.  However even bully’s and thugs deserve due process and a measured response to their unacceptable conduct.
Many cops have criticized me for my intolerance for police misconduct in various cases.  Generally I vigorously support police but, they are human and fail miserably sometimes.  As always cover-ups are more troubling then the conduct.
When Brown was shot dead by Officer Darren Wilson, local troublemakers, all African-American offered up phony stories claiming Brown had his hands raised and was shot in the back.  Others claimed that Wilson stood over a prone Michael Brown firing shots into his lifeless body.
The physical evidence quickly exposed the false versions of these so-called eyewitnesses.
Police and prosecutors went out of their way to hide the evidence and Officer Wilson’s version of events.  This was both necessary and wise.  That allowed the phony eyewitnesses to spread their lies far and wide.  That insured that their deceptive stories were locked in tightly.
The irrefutable forensic evidence horribly impeached the fake eyewitnesses.  Wilson’s version matched the evidence.
With only the fabricated side of this story being widely told, broadcast and published and as always it quickly became the "truth".
That brought on massive nationwide handwringing, hate and race baiting.  Al Sharpton, Jessie Jackson and former Trayvon Martin family lawyer Benjamin Crump came into town spreading their unsubstantiated lies and hate.  They wasted no time exploiting the media for their moneymaking opportunity.
The media, as always reported the sensational but invented truth to the masses.  Everyone formed an opinion established by the extraordinary claims of cold-blooded and race based murder by a cop.
In an unprecedented move following the secret Grand Jury presentation prosecutors quickly released photos, reports and the actual testimony by Officer Wilson.  This amazing transparency shows that the case was presented in an impartial way.
The killing of Michael Brown was clearly a justifiable homicide and not a crime.
The chain of events following this tragic story showcases a much larger problem.  The hate and distrust between African-Americans and the rest of America’s population. That along with the larger problem of massive media and political exploitation.
I asked all of my liberal friends to wait for the real evidence to surface rather than believe the hate fueled gossip.  That was an impossible mission.  Minds were already made up and set in concrete.  Of course they quickly labeled me as a racist.
The media along with the political and professional race baiters should be ashamed of themselves.  They are the ones that exploited this event falsely turning the fatal error in judgment and death of Michael Brown into a hate crime.
Posted by Paul Huebl Crimefile News at 11/25/2014 08:31:00 AM

This is a simple case - a young, very big and strong man (Brown) commits a strong armed robbery in a store - YES this is a FELONY, and police have authority to use deadly force if necessary. The robber, (Brown) flees the scene and Officer comes in contract with him. Brown does NOT want to go to jail so he disobeys the officer, he then attacks the officer, and he is shot and killed. The officer felt that his life was in danger, Brown is one big Bully, look at his height, weight, etc. Too bad the bum got killed for the parents sake, BUT it is NOT the officers fault. End of story.

Paul, I have NEVER seen such irresponsible and agenda driven reporting like this before. CNN on their website had an animation recreating the incident in shich Brown was on his knees ans Wilson walks up and shoots him in the head FIFTEEN HOURS AFTER THE GRAND JURY ANNOUNCED THEIR DECISION! Then I heard Jeffrey Toobin state that all Wilson had to do was run away when he was attacked by Brown. Another CNN anchor stated that she could not believe that someone would walk up tona police car and punch a policeman. That would be funny if not for the fact that she was dead serious, it was such a pathetic statement and it happdns from time to time. Throw in all the former "federal prosecutors who have an agenda and ripped both Bob McCullough and the Grand Jury for their decisionnand you can see why ghis turned out the way it did. The MSM fanned the flames and and aided and abetted the CRIMINALS that burned Ferguson. I have NEVER been so angry with and embarrassed for the MSM as I am today.
One more thing. The NYT published Officer Wilsons home address . One media outlet ( I forget who) published a picture of his home in case those that seek to harm him can't read.

MSM "News" isn't "News" anymore. It is a soap opera heavy with drama and emotion. Brian Williams, of NBC, played the teary-eyed, white guilt interviewer of four teenaged black boys. What does this have to do with news which is suppose to be driven by facts and understanding of the rule of law? Total embarrassment.