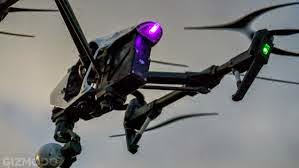 Los Angeles, CA—Yes! As most of my visitors know I’m pumped up and over the top about camera drones as a photographer and filmmaker.  I already own two of them.  My current flagship is the DJI Phantom 2, which uses a GoPro camera.
Today, worldwide there are more than a million multi-rotor camera drones in civilian hands.  They well outnumber conventional helicopters.  They have a perfect safety record of no reported deaths or remarkable injuries.  To date there are still no known collisions between a camera drone and any conventional aircraft.
Like all of the DJI drones the new Inspire 1 model they unveiled yesterday is relatively easy to fly.  If you have or acquire photography and video editing skills you have the time of your life capturing images.  I find flying these multi-rotor copters incredibly exciting, addicting and empowering!
Now there is a new must have camera drone in the skies as I speak.  It’s the DJI Inspire that has taken the industry by storm.
The sleek looking Inspire can go easily travel at 45 mph and has already been clocked by one user at 60 mph.  Because of special built in navigation cameras it can fly safely indoors like in convention halls and churches where GPS signals are interrupted.
The fail-safe, return home feature now sends the drone to the radio controller radio instead of take off point.  That so you can operate this from a moving vehicle or boat.
Previously the DJI drones would only land at the spot where it took off.  This means operating the Inspire from boats and motor vehicles can be accomplished with out fear of losing the drone in the drink!
The Inspire boasts a better camera that shoots in 4K.  The Inspire uses the DJI Lightbridge technology sending back startling real time HD video for nearly a mile. The Inspire works with common TV screens, IPads and monitors.
The telemetry display gives distance, altitude along with precise battery usage information.
It has a better camera 4k and you can use two controllers and pilots.  One pilot operating the drone while the other operates the camera for much better control of the shots. This is made by the same company as my Phantom 2 and was released yesterday.
I must have an Inspire for my own camera drone air force and I hope to somehow get one to use from DJI for demonstration purposes soon.
The cost is just under $3K with a second controller at an additional $600.00.
There can only one word for the new Inspire, WOW!
Sit back and watch the three videos.  Most of the aerial shots were done in and near beautiful Frankfurt, Germany.